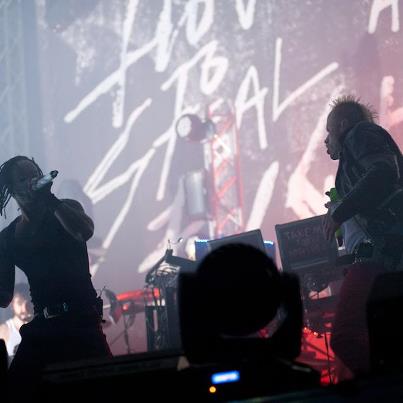 As a kid I have been very big fan of The Prodigy. Prodigy were considered absolutely revolutionary style band in the 1995 – 2004 years. As an ex-big fan of the band and cause of the fact I happened to be near to Burgas I decided to attend their performance on August the 5-th.
Spirit of Burgas as every year happens on the beach of Burgas.

A large number of nice underground rock / punk / jazz / reggae etc. continuing for days is not so common on the balkans so Spirit of Burgas is quite a unique undeground music gathering …
Spirit of Burgas is taking place now for a 4-th year and starting to become an established Electronic, Dance, Metal feast here on Balkans.

Below is a list of all the bands that played on Spirit of Burgas 3 days feast this year; 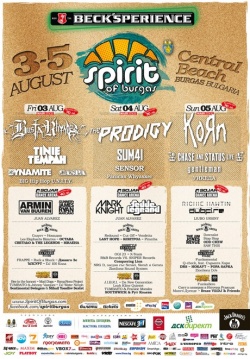 Besides the high price, the only beer one can buy on the beach was Becks (taking me out the choice to buy another beer brand!). Everywhere around was those annoying writings on both billboards and video sceens B’ECKSPERIENCE, Jack Daniels, DSK Bank etc. Advertsiments should be but this was a bit over-stretched!….

Prodigy performance started about 10:30 on the so called Main Stage – a big scene facing the sea. Prodigy break out and enter, the scene right after a performance of modern punk band SUM 41

I don’t know the music works of SUM 41 that’s why I skipped most of their concert checking the other stages perf-s. On most of other stages mostly Bulgarian Punk / Rock / Alternative musicians were playing.
Prodigy’s scene break-up was done with some famous buzzling sounds known from their works, as you can see from the videos I post below.
The Stage was very over-crowded, according to some estimations the concert was attended by about 15 000 people ! ! !. Considering the decay in Prodigy popularity I guess this was quite a good number.
During The Prodigy‘s play all the other scenes were shut off in order to allow everybody to enjoy Prodigy.

I should admit, the music beats and ruffs were just great, but I didn’t liked the vox messages “Keith Flinth”, was spreading; Saying some iditic phrases like:

Where is my People?, My Prodigy People, My Voodoo People and plenty of other non-sense

As a Christian I know pretty well Prodigy’s music message is not in consonance in Christianity and hence I didn’t liked to be associated as a “prodigy person”, cause I don’t want to be associated with people who preach evil. Something else, showing off the low prodigy vocal culture was his frequent use of the F*CK word, which btw was probably the most used word by almost every musician playing on every scene all night long…

The scene lightning was rich but not bright, enough to clearly distinguish what is happening on the scene.
On the back stage, there was the name of latest prodigy album – How To Steal a Jet Fighter with a background of an old jet fighter plane. 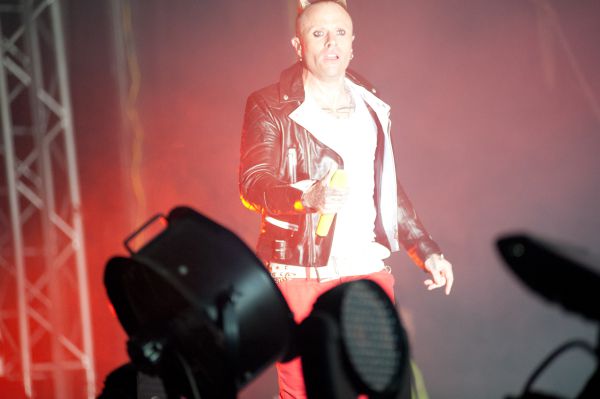 The group scene performance was quite aggressive as always, actually probably it is the primitive behavior of the band and the primitiveness in music that attracts the crowds. People nowadays are too much civilized that the wild primitive deep in us is something we hardly miss as ppl.

By the way during the concert all around the scene, there was massive marijuana smoke (not to say fog 🙂 ). Probably kilos of “Mara” (as smokers call it for short in BG) was smoken by fans during the 1.15 mins group performance.
As a result, many of the ruffling fans were in a tranced “Nirvana” state 🙂
Something, I’ve noticed is the quality of Prodigy performance, has severely fallen if compared to old concerts of the band period 1999 – 2002.
One moment in the concert was really pissing off for me, when Keith Flinth instructed the public to GET DOWN, saying something like:

Now everybody GET DOWN, I SAID GET DOWN – the sheep fans just followed the ORDER squatting; This was pure “MIND CONTROL” – almost everyone squatted unquestionably.
A girl behind me tried to push me down, to make me kneel down as I refused to squat 🙂
I told her that “I don’t follow orders, jokingly and didn’t squatted 🙂

This squatting from Christian position looked like exactly like worshipping Prodigy as [ idol (God) substitute ] …
The concert end up in a very stupid way; there was no encore performance, not even introduction of the band members to the people and even a no simply BYE to the fans. They just shut off and went away silently like a beaten dogs 🙂

Following the end of Prodigy performance on the neighbor Stage, the “legendary” Bulgarian Punk / Rock old-school band KONTROL was playing. I had great fun with KONTROL as I used to be very much loving the band back in my metal years 🙂 KONTROL’s performance was just great, but unfortunately the scene lightning was again shit and the big Video Screens was switched off so I could see the band hardly. After KONTROL’s end up another hard-core Bulgarian band jumped the scene (PIRANNHA). This guys, were completely funny and i really disliked them as they were heavily copying Venom, even their logo was copied from Venom’s Goat Pentagram (the band mascot was a Satanic Pentagram on wheels (complete iditiosm) :D)
The vocal were cursing themselves, screaming funnily “F*CK PIRANNHA, F*CK PIRANNHA !” 🙂

Spirit of Burgas was supposed to close about 5 in the morning, but I was too busy and I left in 2:45, spending few minutes listening to some kind of nice sounding Drum and Bass DJ playing on the main stage.

This entry was posted on Tuesday, August 7th, 2012 at 5:08 pm and is filed under Everyday Life, Various. You can follow any responses to this entry through the RSS 2.0 feed. You can leave a response, or trackback from your own site.