Earlier when I wrote an article about celebration of St. George's day in Bulgaria and took the time to read a bit more in Wikipedia about which country venerate st. George's day who by the way is one of the most honored Orthodox Saints, I curiously found United  Kingdom to be among one of the countries keeping saint's memory. Today while opening Google.co.uk for a search Google's usual picture logo had instead below nice looking fairytale medieval picture;

The picture made my childish nature be curious and I clicked on it just to find few articles about Saint George's day in England which happens to be celebrated today in 23 of April. As I myself bear name after saint George it means it is now my nameday in England 🙂 Though saint George is England patron saint because English people are not so religious as earlier, the feast is not considered as Official Public Feast. In Bulgaria we celebrate st. George's day in 6th of may and it is non-working public holiday for all country as well as it is Official Feast of Bulgarian Army.
I like comparing things so It was quite curious for me to see how Saint George is depicted in England and Western Europe countries and compare to our Orthodox icon saint tradition; 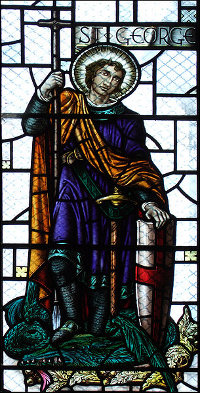 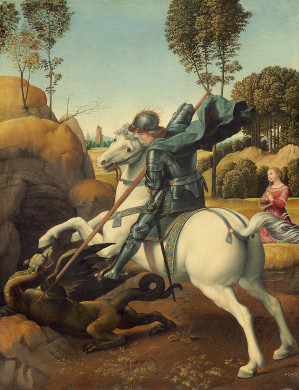 Saint George and the Dragon by Master Raphael – circa 1506 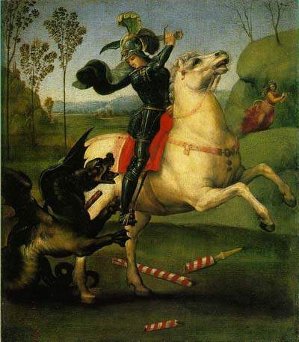 Curious fact related to Saint George's veneration is that the center cross on England's flag is actually saint George's cross of victory – A reference for saint's victory over evil with faith in Christ.

In England it is typical flags with the image of St George's cross are flown on some buildings, especially pubs, and a few people wear a red rose on their lapel.
Saint's day is most venerated in Salisbury, where there’s an annual St George’s Day pageant, which probably dates back to the 13th century. During the crusades in the 1100s and 1200s, English knights used St George's cross as part of their uniform. St. George's cross keeps in England official flag for centuries. Nowadays the flag of England – the so called Union Flag is a combination of St George's cross, St. Andrew's ( X shaped crsoss ) and St. Patrick's cross. Even to this day English football fans paint variation of cross on their face most of which do it without realizing  the deep roots of the ancient Great Britain symbol.

This entry was posted on Tuesday, April 23rd, 2013 at 10:04 am and is filed under Christianity, Curious Facts, Everyday Life, Various. You can follow any responses to this entry through the RSS 2.0 feed. You can leave a response, or trackback from your own site.