Three Ways to Reduce Addiction to Mobile Phone ( GSM ) use 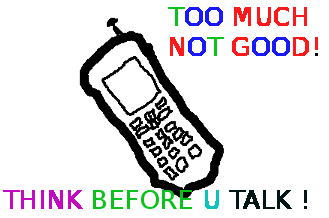 1.: Don't use a ring tone or use a short landline phone ringtone on incoming calls

In the past, we all had a local stand line phones, most of the landline phones rung using a very specific ring sound which was almost identical on all phones around the world. This ringing tone used was following some telephone standards. The result was everyone could distinguish a ringing phone in a room or closed space and tell for sure, this sound is generated by a phone. Nowdays with the boom of cellular phone ringtones, there is almost noone who uses a standard old-fashioned telephone ringtone as a ring melody.

The consequence of this is in our minds we start loosing the boundary between whether communicating on the phone or communicating without it.
In younger people this boundary between phone line and a physical communication is more evident than in adults (as youngsters has grown in society where mobile was used everywhere). The implication of this is more and more people are starting to perceive mobile communication as so natural as the person to person communication. Spending big part of the day talking over the phone mostly senseless things, not being consciously aware that this is done due to a heavy phone addiction and repeating behaviour trait stored sub-consciously.

Today everyone chooses a custom mobile phone ringtone melody (popular or impopular) song and sets it up to be a standard incoming call signal. As you can guess there are consequences on the mind, as the ringtone set is heard ten times or more a day during each and every phone call. The result is just like with alcoholics or drug addicts, the more you take from a certain "good" the more attached you become to it. Hence the more we listen to a certain song chunk daily on incoming calls, the sub-conscious becomes dependent on hearing this sound at least a number of times daily. If a day passes without no-one calling us and we don't hear the ringtone indicating a call the sub-conscious stored dependency starts popping up and we could start feeling lonely and we feel like calling someone (and we often do). Obviously this is dependency and even if someone might argue me this is a severe addiction which as every other addiction could be very dangerous and hard to fight.

As I prior said due to the fact that the phone use dependency is built in our minds starting with the phone ring melody, we can reduce this dependency by switching off the phone ringtone completely or at least changing it to a unique beep which is not likely to be heard or seen somewhere in your surrounding environment.

By setting the ringtone to some popular song we see on (TV, Radio or Internet on daily basis) this might become a trigger for us to associate hearing this sound with talking on the phone and hence make you increase the time you spend on the phone ,,, so be careful ,,,,

All new mobiles sold on the market are configured to have buzzling sounds on events and various beeps on keypad lock / unlock and menu navigation.
This sounds are there mostly to make you more alert and concentrated on using your mobile and often as a consequence whether one uses his mobile his awareness is comletely taken by the phone screen (you're totally "absorbed" by the phone use).
Besides designed to alert you the Managers and CEO's who decided to have a heavy beep sounds on mobiles made it having probably something else on mind? The beeps on keypad navigation makes the user emotionally and sub-consciously attached to the Cell Phone. The idea here is like in popular music streamed on radios and TVs and mostly everywhere …. The more you listen to a song, the higher the mind trait it leaves in you, so later when one hears a music pattern or a whole song, which he / she listened already thousands of times this brings back "good" old memories. It is very simple actually our minds are constructed in a way that the mor certain "information" is heard / saw / smell the bigger the mind influence this leaves on us. Back to the mobile sounds, the more you use the mobile phone with turned on sounds, the more addicted and mind stucked the beep and melodies during use of the cell phone becomes in the mind. For example many people take a look at their mobile automatically (without being consciously aware) and do the activity of (unlock) and (lock) the phone screen not knowing they do it automatic. More or less we all do such an auto-mated learned behaviour because of the subconscious dependency that is built in our minds. Whether we lock and unlock the mobile phone almost robotically, we do it because our sub-conscious mind plays a trick on us and "force" us to do a previous learned activity (association in our mind with the unlock / lock beep sound).

3.::: Use your mobile in different ways

Any modern mobile is quite advanced in functionality and there is more than one way to initiate a phone call. E.g. the mobile has a shortcut buttons assigned to do quick phone calls, quickly evoke SMS menu etc.
Learn them and occasionally use the shortcut buttons instead of the menu navigation. Our minds like changing patterns and doing things different.

Even if you have no chance to do a things via a certain menu, you can always change the position of the phone screen to different distance to eyesight 🙂 You can for example type on the keypad following the menu steps by watching from left or right eye periphery or you can use the menus with your phone screen turned backwards 🙂 If you're used to type on the keypad or touch screen with right hand try doing it with the left hand 🙂

This will take time but the fun worths it. Plus the most valuable thing in using the mobile in different ways each time is there is no specific inflicting pattern associated in your mind and hence the depepdency set in your sub-conscious mind on phone use is lesser.

This entry was posted on Wednesday, June 27th, 2012 at 7:34 pm and is filed under Business Management, Everyday Life, Various. You can follow any responses to this entry through the RSS 2.0 feed. You can leave a response, or trackback from your own site.