My 17 years old, first in line Cousin Stanislav died in a motorcycle accident :( 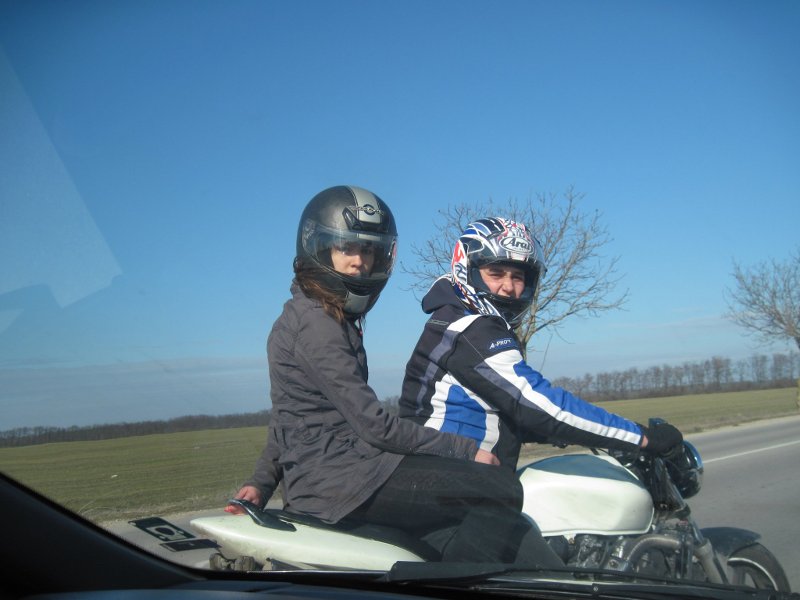 Yesterday about 14:08, my beloved cousin Stanislav Valentinov Velikov has passed a way silently in a motorcycle accident.
It’s really terrible, I’ve been told today by my relatives and it was quite hard to believe it.
My impressions from Stanislav was that he was a very kind good and shiny boy. Like most of us the sinners he had a deadly passion Motorcycles
I haven’t seen Stanislav for already about 2.5 years, which was my personal fault not to keep a close contact with such a close relative.
Last time I saw him, he was almost a child and now just few years later he is gone. I’ve just came by from his home, where all the relatives friends, grandfathers, grandmathers and all that loved him and know him when he was still among the living were gathered to say a last goodbye

What is even more painful is the ridiculous way he has passed away. Stani as we used to call him was driving his new Honda motorcycle and was driving nearby a traffic lights on a street “San Stefano” here in Dobrich, a taxi driver was trying to do a manoeuvre right after he had left his last customers.
Of course as it often happens in Bulgaria the taxi driver was doing the manouver against the set driving rules, (he was doing a backward maneuver) on a street crossroad (located nearby the big supermarket Billa).

Stanislav was coming through the traffic lights in a high speed (it’s not clearly known what speed).He was driving the professional motorcycle without a a proper driving license, as he was 17 he only had a driving license for moped vehicle.

It appears the stupid taxi driver was doing his irresponsible law breaking maneuver right in the moment when Stanislav was riding on the road before the traffic lights.
As my cousin saw the taxi driver he got probably scared (presumably) tried to use the breaks to prevent crashing the taxi driver possibly loose the motorcycle holders.
He jumped over the motorcycle and hit and broke his neck 😐 It’s a terrible story really. What is even more terrible that the taxi driver was an ex-policeman and was one of the responsible sides for the deadly accident which costed the life of my cousin.

What can I say Bulgaria is really an insane country, even though I’m not a big wester fan I should say such an accidents are not that common in the Western World as the law is more observed there.

I’ve heard from my grandfather and grandmother that Stanislav was really gifted in technics especially in repairing motorcycles, moped vehicles etc.

Stanislav is still a pupil in the nearby Mathematics High School “Ivan Vazov”. Before his unexpected death my cousin was planning to get her girlfriend and get a ride to Varna where he was supposedly going to spend the school break and see my other cousin Desislav …
I’ve been to Stani’s home and saw his lifeless body and it’s really striking, he is so young his death is causing an enormous trace and pain in me and my family.

Now my family is lessing itself with a one more good and decent person. Stanislav is a victim of this cruel age. I remember since his childhood that he was very pationate about computer games with motorcycles and cars.
His deadly passion then went on into the real world, he first got a moped, then a professional motorcycle. He violated the law taking the bad example of the many computer games which preach uncontrolled high speed, adrenalin and living on the edge.

But my beloved cousin Stanislav as he was still a teen was not the one to be blamed, the real responsible ones are our parents who doesn’t educate is in the tradition and spirit of the faith of our fathers Orthodox Christianity

I’ve heard from my relatives that now the taxi driver probably want even be hold responsible, as he is an ex-cop and he has many friends still working in the police. Friends who would proof the taxi driver innocent!

We had a small talk with my sister today about the direct influence of the movies and the computer games on the computer psyche.
I believe my cousin is not responsibe for his tragedic death as he was just following an implanted route in his mind by the multiple games and violent movies he has been a fan of.
Stani is just another victim of this cruel age … As I saw him laying in the coffin I was thinking how short our live is. We work we bye we sell but we never know when our time will come.

It’s a sad day today, it’s, also a clear example that we who are still living should come again to the mindset that we’re here for a short time.
We should day by day think of what we have done wrongly (our sins), we should try to live better and love more as our saviour Christ has instructed us “If you’re my pupils, love each other”.
It’s sad that we’re so hard-hearted that we don’t realize that what happened is a God’s warning not only to my family but to everybody out there.

If we don’t repent our sins and start living as God instructed us, our pains would multiple and our days will be living in sorrows …
I pray that our merciful God the Holy Trinity has mercy on Stanislav’s (newly presented) soul and be merciful on him and receive him in paradise …