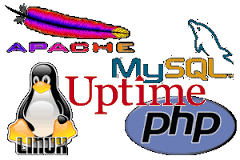 Something very useful that most Apache LAMP (Linux Apache MySQL PHP) admins should know is how to check Apache Webserver uptime and MySQL server running (uptime).
Checking Apache / MySQL uptime is primary useful for scripting purposes – creating auto Apache / MySQL service restart scripts, or just as a quick console way to check what is the status and uptime of Webserver / SQL.

My experience as a sysadmin shows that lack of Periodic Apache and MySQL restart every week or every month often creates sys-admin a lot of a headaches cause (Apache / NGINX / SQL  server) starts eating too much memory or under some circumstances leads to service or system crashes. Periodic system main services restart is especially helpful in case if Website's backend programming code is writetn in a bad and buggy uneffient way by unprofessional (novice) programmers.
While I was still working as Senior SysAdmin in Design.BG, I've encountered many such Crappy Web applications developed by dozen of different programmers (because company's programmers changed too frequently and many of the hired Web Developers ,were still learning to program, I guess same is true also for other Start-UP Web / IT Company where crappy programming code is developed you will certainly need to keep an eye on Apache / MYSQL uptime.  If that's the case below 2 quick one liners with PS command will help you keep an eye on Apache / MYSQL uptime

Though example is for mysql and Apache you can easily use ps cmd in same way to check any other Linux service uptime such as Java / Qmail / PostgreSQL / Postfix etc.

Free Software (FS) is free as in freedom as well as free as in price. Free and Open Source Software (FOSS) is developed by geek hobbyist which voluntarily put their time and effort in writting, testing and sharing with anyone for free million of lines of programming code. This doesn't mean however the price of free software costs is 0 (zero). Though the "end product" –  Free Software developed is FREE, "real" software costs as with any other product costs huge money.

I've recently read on Jeb's blog an estimation on how much is the cost of one of the major Free Software project efforts – Debian GNU / Linux
According to James E. Bromberger – the whole Debian project was estimated to be at the shocking price of $19 billion – $19 000, 000, 000 !!!

Here is how JEB got the $19 billions, a quote taken from his blog:

"By using David A Wheeler’s sloccount tool and average wage of a developer of US$72,533 (using median estimates from Salary.com and PayScale.com for 2011) I summed the individual results to find a total of 419,776,604 source lines of code for the ‘pristine’ upstream sources, in 31 programming languages — including 429 lines of Cobol and 1933 lines of Modula3!

James has done incredible job with this great research and he deserves applause.
However I believe the numbers proposed by his research are slightly different if we speak about realistic cost of Debian GNU / Linux.
The real costs of the working software ready to install on a user PC are way higher, as according to Jeb's research only the software cost based on code line count is considered.

Hence James software estimation calculates only the programming costs and miss many, many factors that constitute the software end cost.
Some of the many, many REAL COST / expenses for developing a huge Free Software project like Debian GNU / Linux to be considered are:

d) Time on evaluation and feedback on software

g) Time spend on research and self-actualization by software developer)

This are most of the multiple factors which should probably influence the cost of any non-free (proprietary software) project. No matter this costs apply for non-free software, it perfectly applies for free software as well.With all said if if we assume the non-programming costs are equal to the programming costs of $ 19 000 000 000 (suggested by Jeb). This means the real cost of Debian will presumably be at least $32 000 000 000. Putting $ 19 billion for all this long list of "additional" costs (besides pure source) factors is probably still very under-scored number.

Very interesting figure from Jeb's research is the Programming Languages break down by source code figure.
Jamesresearch reveals on the 4 major programming languages used in the 17000+ software projects (part of Debian GNU / Linux):

His research also provides a general idea on how much the source code of some of the major FOSS projects costs. Here is a copy of his figures

Other highlights by project included:

As you can imagine all the source evaluation results, are highly biased and are open for discussion, since evaluating a free software project/s is a hard not to say impossible task. The "open" model of development makes a project very hard to track, open source model implies too many unexpected variables missing from the equation for clear calculation on costs. What is sure however if turned in money it is very expensive to produce.  At present moment Debian Project is sponsored only through donations. The usual yearly budget 5 years ago for Debian  was only $80 000 dollars a year!! You can check Debian Project annual reports throughout the years here , for year 2012 Debian Project budget is as low as $ 222, 677 (US Dollars)! The output price of the software the project provides is enormous high if compared to the low project expenses!

For us the free software users, price is not a concern, Debian is absolutely free both  as in freedom and free as in beer 😉