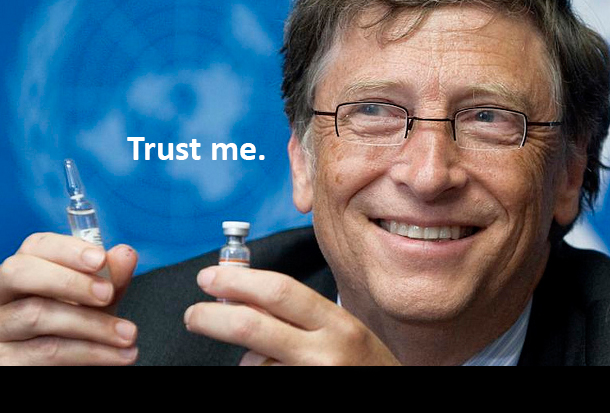 While checking some videos on the net I've came across information that Bill Gates bough 500 000 shares from Monsanto.

Gates is a well know for being Philantrophist, giving large amounts of charities aiming to fight the hunger in Africa through his and his life charity foundation Bill and Melinda Gates. This charity looks like something perfect on a first glimpse as of September 2011 he has donated $33 billions to the foundation which is trying to help Africans to fight hunger diseases, find cure for HIV etc.

The methodology to help the hungry and sick people in africa is done via distribution of food grown and vaccination and helping the "poor" people in Africa get some education. It all sounds like a very good deed and one can say "what a good man of honour" GAtes is.

Well this would have been true only if Gates didn't said it clear in TED's show that vacination is one of the ways which can be used to battle the over population and increased need for food, medical service and energy.

See the short video below:

I don't think it is too likely gates made an error in saying what he said on the presentation, obviously it was a clearly prepared presentation for the show and what he said was exactly what he meant. Now put aside the vacination of africa along with the likeness that a lot of latest drug medicine are probably injected in many unknowing Africans used as a guinea pig and you understand that this $33 Billion are given for eradication of large and testing of medicals on large population uneducated mass in Africa.

Not that I say vacination is necessery bad as one could think. From the few videos, I've seen with Gates rationalizing on various world problems one can come easily to the conclusion that Gates has a strong Utalitarian mindset. If you're not aware of Utilitarianism frightening philosophy see here

The Advantages Of Using Free Software Instead Of Proprietary One

Reading Time: < 1minute
I almost forgot. We had to do a presentation in the College on a free theme I choosed â€œThe Advantages Of Using Free Software Instead Of Proprietary Oneâ€ from this link you can check was all about Free Software Advantages Presentation .
The presentation went smoothly as a whole the only problem was that my collegues had no really idea what is all this about. The good thing is that the Business Communication teacher said the theme is really interesting and likes what I did. God was merciful also to give me a peace during the whole presentation thing.
Thank you LORD.
There is also a plain text version of the presentation which can be seen here ENDâ€”â€“

Reading Time: < 1minute
Yesterday I spend a lot of time outside with Lily. We went to the fountain we watched film at home. The film was called”Wild Hogs” it was supposed to be a fun commedy (only supposed to be). This week is going to be a taugh one.We have to present a project at Marketing Research.

I have to write a 600 words resume about International Enterprice,also we have to make a presentation in Culture. Today in the morning i was on a Liturgy again. God’s grace ishere ! The week passed without serious server issues (Thanks God). Today I checked some logs of one of the serversand I observed oddities there. I checked the crontab and I realized it’s because of a crontab. The dumped databaseis a HUGE one 2.6G (bzipped).

I asked in irc.freenode.net#mysql, and the guys there pointed me to a similar issuewhich was supposed to be an MySQL bug when dumping large database. Since the dumping databases were of a type MyISAMI ofcourse could have used mysqlhotcopy.

But in the end the solution to the problem was removing “–opt” option fromthe backup opts of mysqldump and passing “–skip-opt” to it (I suspect this would slow the dumping process a lot).But I don’t care it is much better (a slow dumping), than hanging the whole Webserver and interrupting the site’s visibilityover the Internet.

Btw I started playing Quake 2, it’s cool but a little annoying there are too many tunnels and veryoften after I kill most of the bad guys I spend a lot of time searching for keys and stuff .. :).END—–