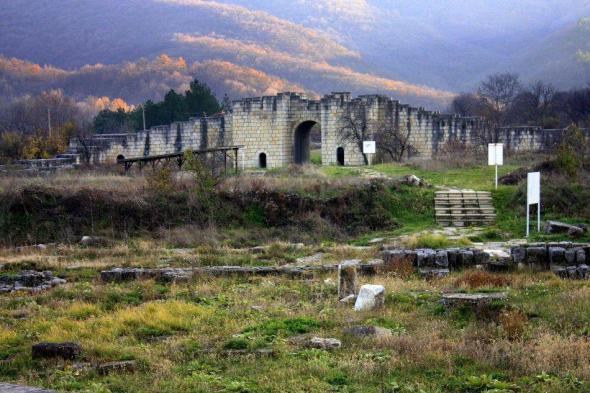 Recently I had the great oportunity to Visit another two great History Landmarks of my homeland Bulgaria the monastery Patleina (Saint Pantaleon (known in Slavonic tradition as Panteleimon) – in memoriam of the great healer Christian Saint) where according to Orthodox Church tradition and archeologists is the historical monastery where Saint (Tzar) King Boris the Baptizer of Bulgaria has concluded his early life as humble monk praying for the heavenly blessing and prosperity of his young Christinized Country Bulgaria.

Saint Panteleimon is famous in west Roman-Catholic Christian tradition to be one of the Fourteen Holy Helpers a patron of doctors and herbalists especially famous during the middle ages 14-19 century summoned by people as a shield against various diseases and asked for help for untreatable sicknesses.

Besides the famous monastery Patleina region is a natural reserve 40,62 hectars in North-East Bulgaria, after 893 just few years after the Christianization of Bulgaria in 865 by King Boris the region is famous for being a host of a world famous ancient Presval Literary School near the region are found the oldest known cyriic datable inscriptions. Just to name a few of the famous Preslav Literary School authors that is Saint Naum of Preslav, Bishop Constantine of Preslav (Author of Alphabet Prayer), Historics and various other ancient Bulgarian spiritual literature, John the Exarch, Tchernorizets Hrabar etc. 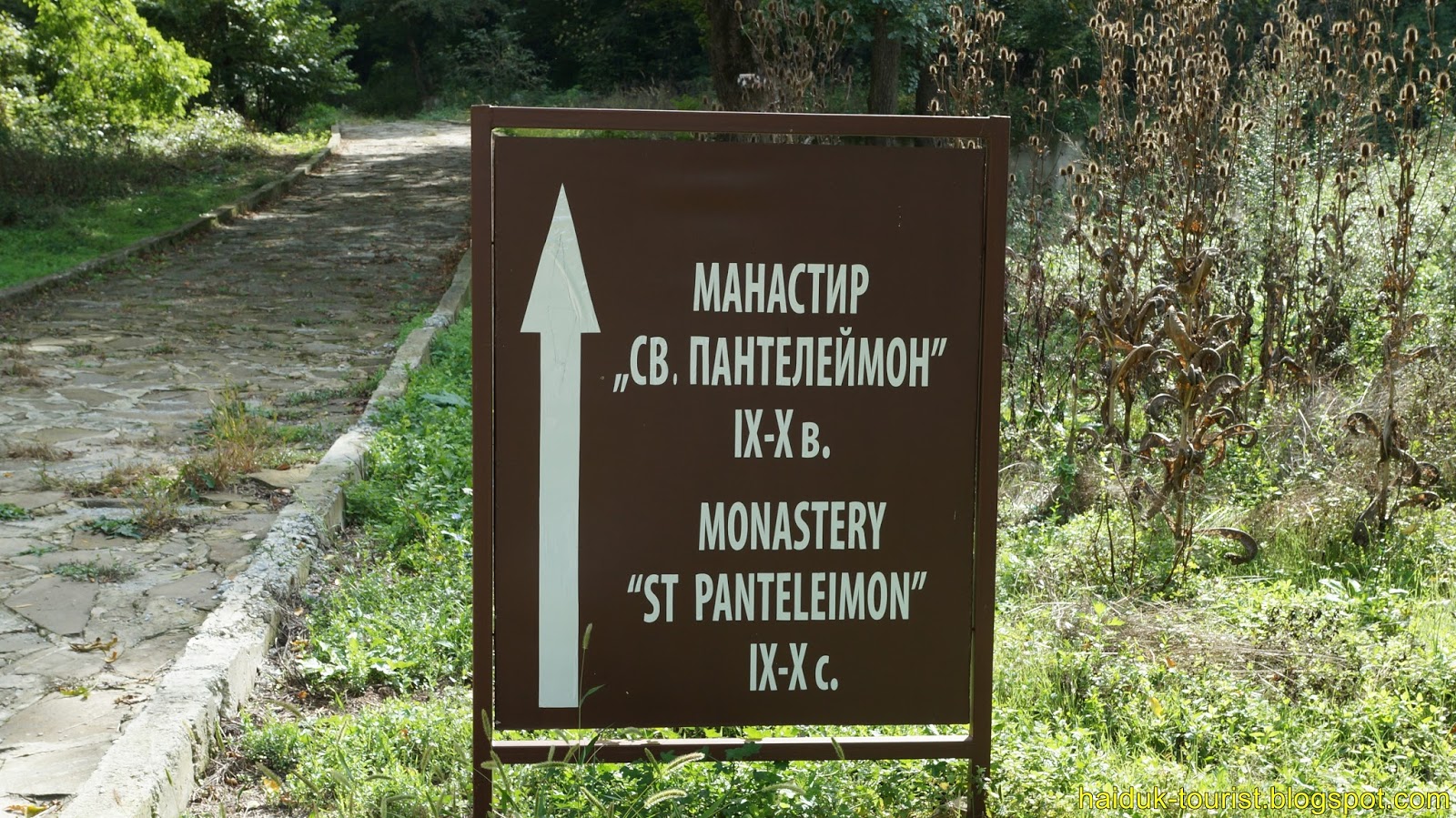 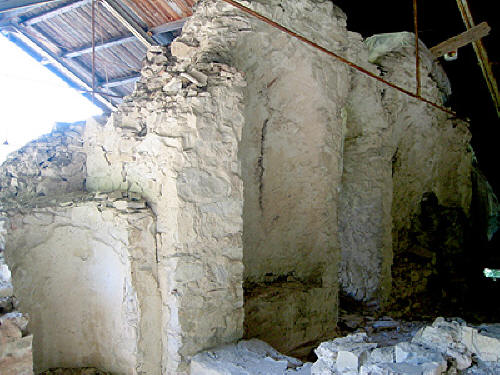 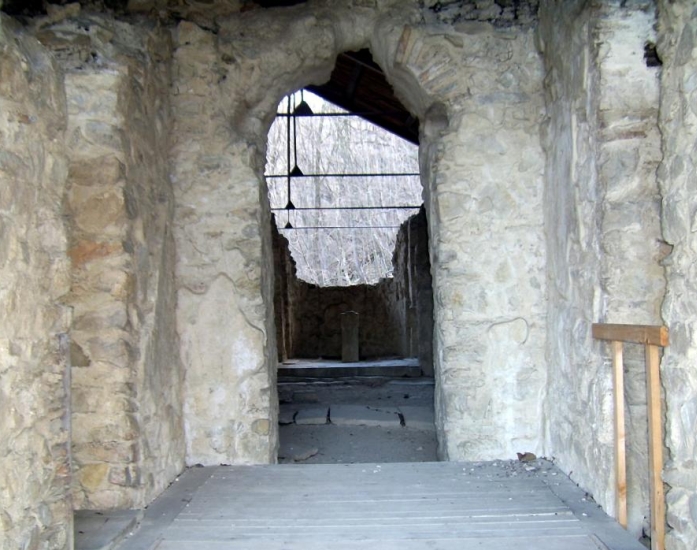 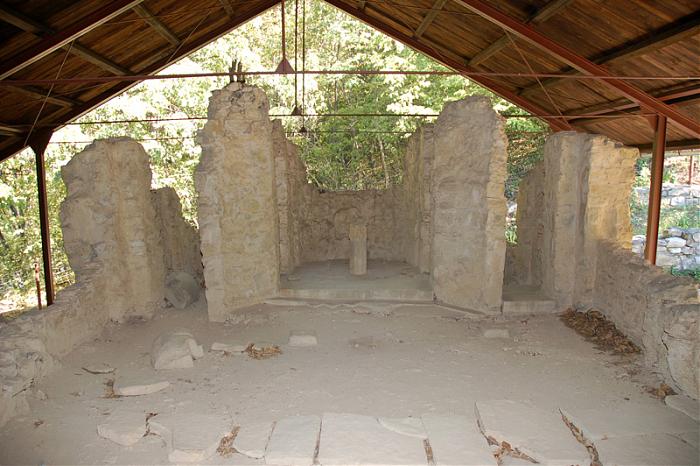 Veliki Preslav the famous Ceramic Icon found during archeological excavations in Patleina Monastery (2 km away from Veliki Preslav)
The icon style reminds of Byzantine art of 10 century, the icon image looks very much alike saint Theodor Stratilates though it not 100% proven whose image does the icon depicts – It is interesting fact that Patleinas craftman workshops are believed to be the biggest ceramic workshops on Balkans in 10th century consisting of a separate ceramic plates – picture source Wikipedia

Besides its  ancient monastery and archeological excavations Patleina region is famous for being a reserve keeping one rare type of tree Carob Tree (or Ceratonia siliqua).

Just about 300 meters away from the ancient monastery Patleina there is functioning monastery that was recently restored bought back by Bulgarian Orthodox Church from the Government, the monastery building started in the 1930s (in which Bulgaria was in a serious spiritual and economical boom, however the building completed right before the completion of the Second World War before 9.09.1944 the date at which the Third Bulgarian Kingdom finished its existence and the communist came to power. 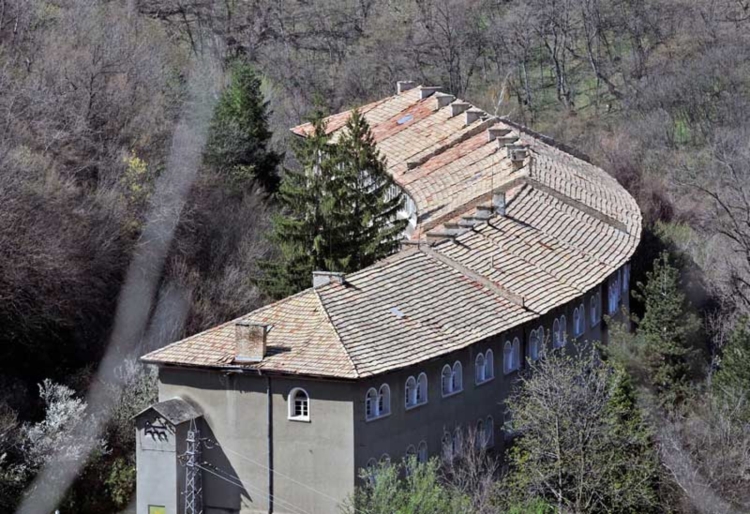 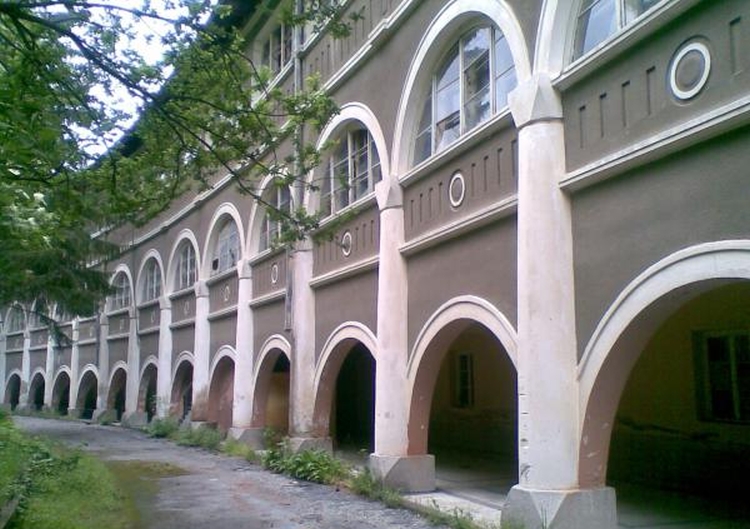 The monastery saint Panteleimon was planned as in impressive building as in the 30's there was a hope for a restoration of Patleina as a spiritual center that will elevate itself to the importance it once had in the 9th century for the raise of Bulgarian Empire, the building is 4 floor and has the shocking number of 120 rooms.
The fresh air and nature all surrounding it makes it a great place for rest for people who are overwhelmed by their daily stressful life and as far as I understood there is possibility for renting some of the rooms for a couple of days for pilgrims or even tourists.

Currently the whole enormous monastery is inhabited by only one monk Hieromonk Father Constantne who is also appointed as an Abbot of the Monastery and is in process of doing his best for restoration of the monastery and building a monastic brotherhood. 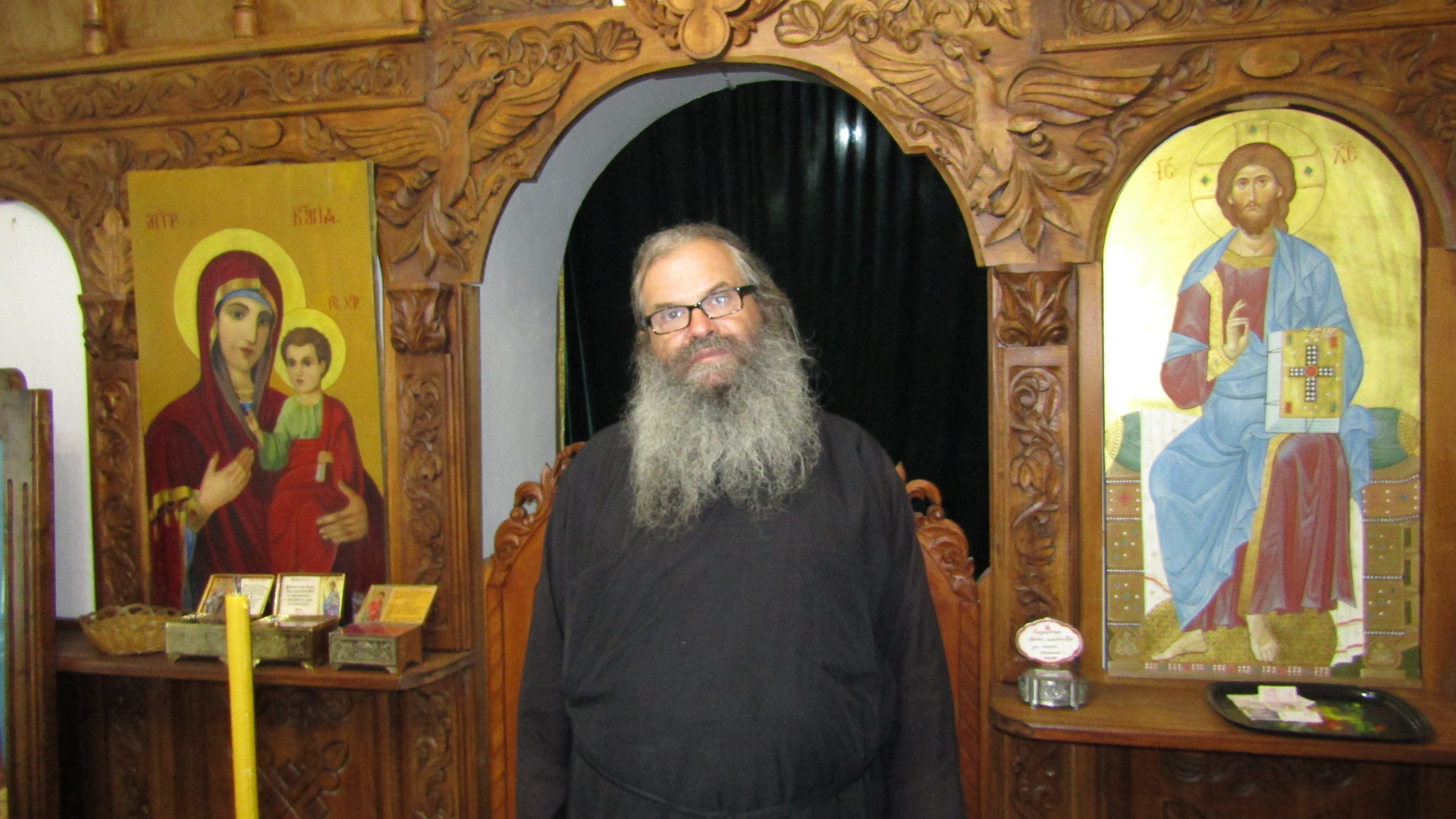 As it is visible from the picture (the boxes under the icon of the Virgin Mary) the monastery has holy relics of Saint Panteleimon and relics of few other saints. What is interesting about father Konstantin is he used to be working in the Bulgarian Atomic Central (AEC Kozlodoi) scientific work before he converted to become a fervent Christian.

After father Konstantin understood God is a reality he decided to dedicate his life to Christ and he used to be a (novice – neophyte) in the Holy Mouth Athos monk republic in the Bulgarian Monastery saint George for 8 years!!!

It seems in this years father Konstantin realized he would be more helpful to become a monk in Bulgaria instead of Holy Mount Athos as here in Bulgaria, there is a lack of monks at the moment Bulgaria has according to what I heard a maximum of about 200 (monks and nuns) which is critically low.

Holy Liturgy Church service is being served regularly in the small monastic Church which is more looking like a Chapel and is on the first floor situated in the monastery building.

Father Constantine is famous for his hospitally just like most of the Holy Athos monks and right after the Sunday Service it is a tradition to feed all his guests, as a guests we were richly fed and we shared his lunch table just like Agape (the dinners of love of ancient Christian times).

To find out more about Saint Panteleimon Monastery check out the monastery official site here.

Very near to Patleina Monastery there are other great landmarks for those interested in archeology as Veliki Preslav (Great Preslav) the first Bulgarian Capital and Ancient Center of Orthodoxy who had a major influence on Russian Cyrillic and Orthodoxy and from where most likely many Christian icons and books were transferred later to Russia to help them raise their spirituality after Baptizmal of Russia is situated just few km away. 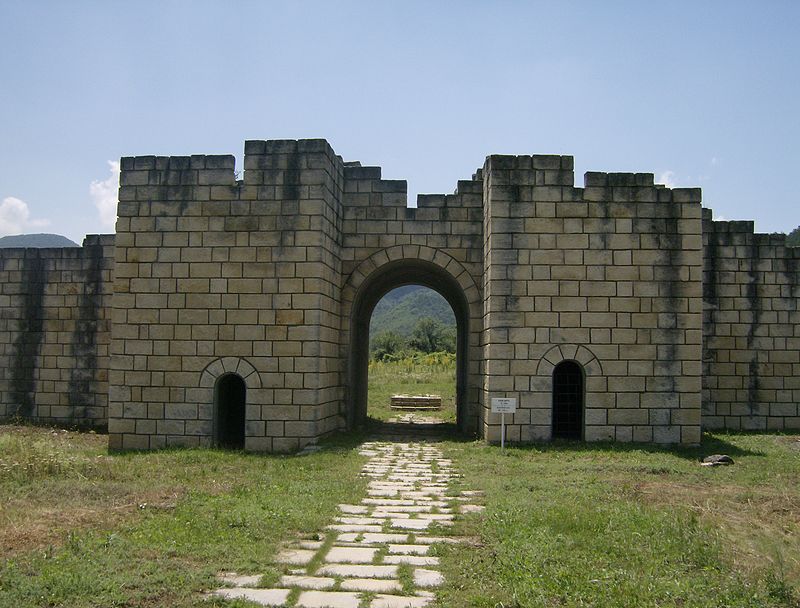 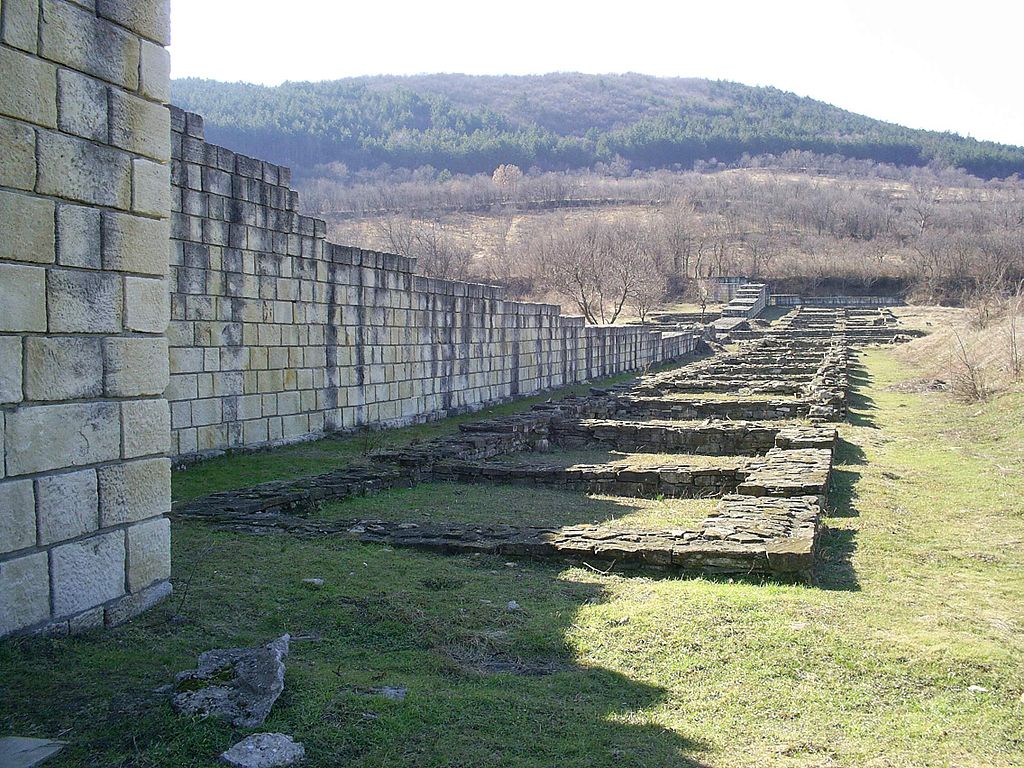 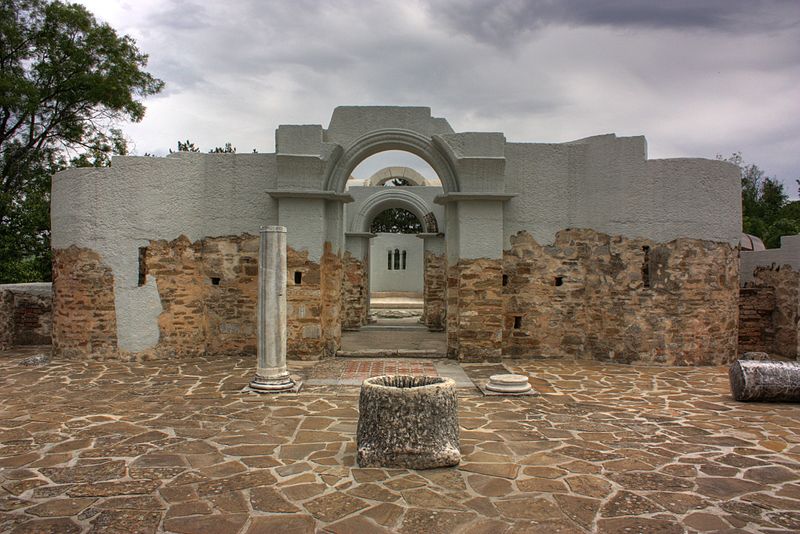 Great Preslav the famous Golden Church – the Church was partially restored to show the visitor how approximately it might have looked like in the X-XII century (The church was found during archeological excavations in 1927-1928 by Krystio Miatev and Jordan Gospodinov – according to  written sources from 907 by Tudor Doksov, the Church coincides with the Church built by Simeon I the Great who proclaimed himself an Emperor of Bulgaria 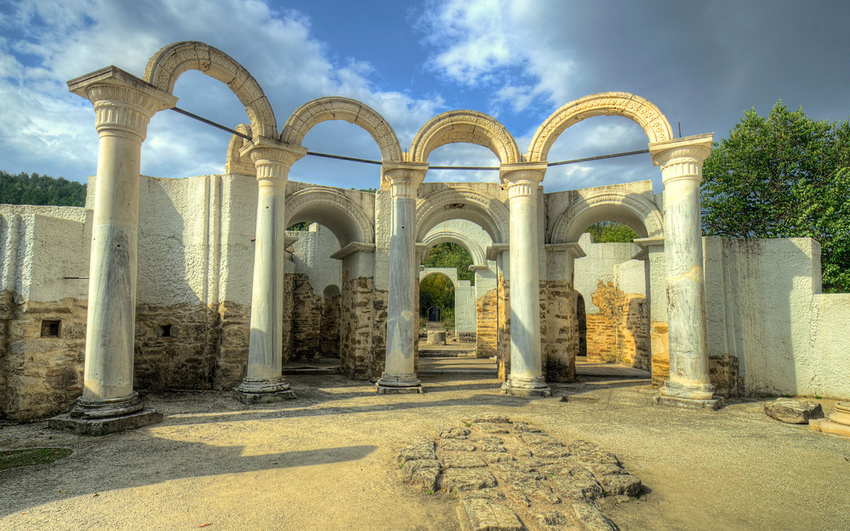 Preslav the Golden Church (also famous as the Round Church) – picture source fonstola.ru 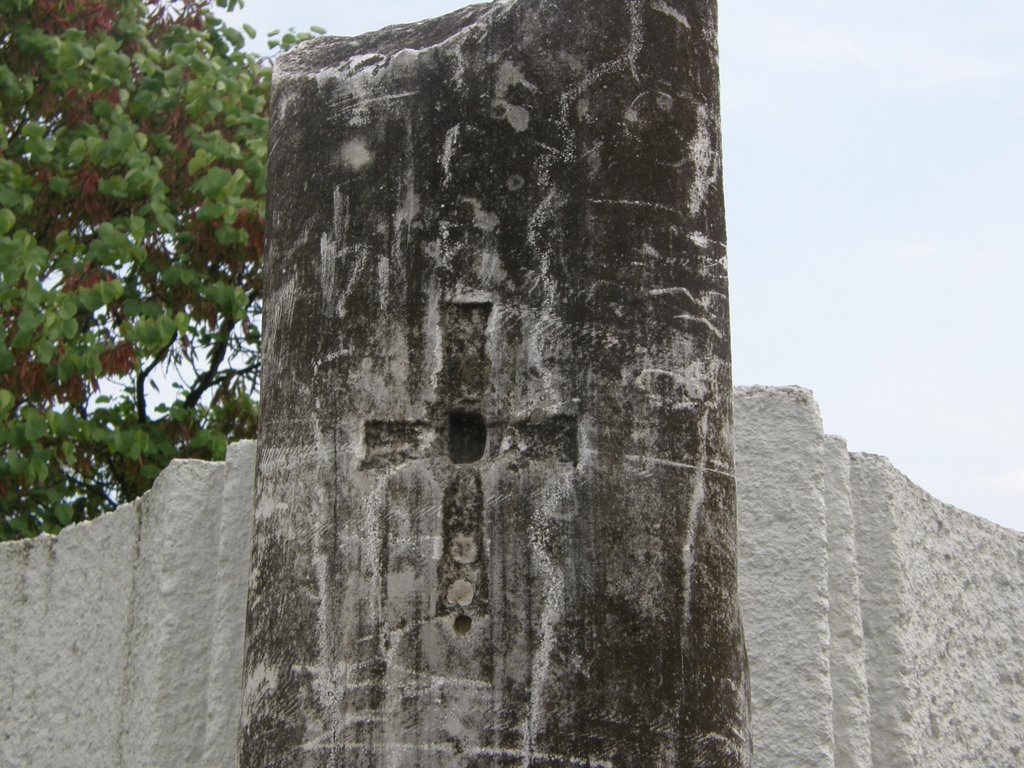 Cross on a Stone The Round Church – photograped by Angel Pavlov 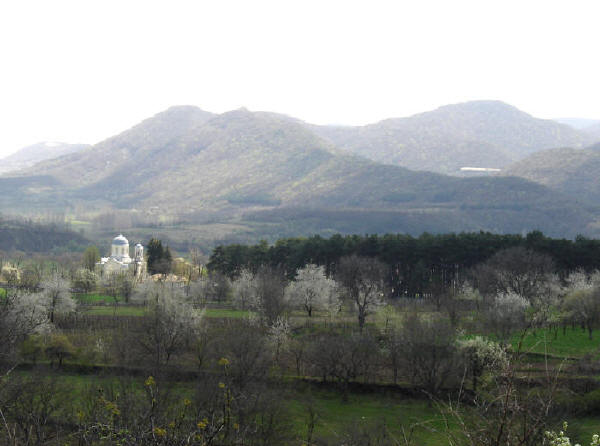 Another Memorial Church worthy to visit in the region is situated on another fortress nearby to Great Preslav. The Memorial Church has the size of a Cathedral and is one of the biggest Cathedral Churches in Bulgaria. 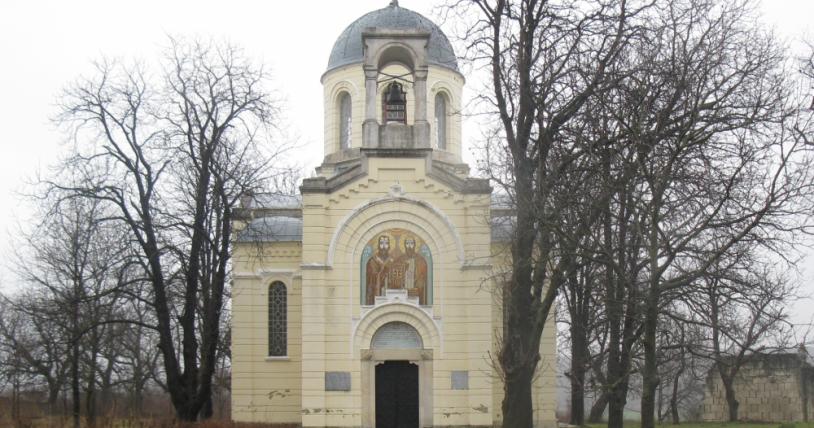 St. St. Cyril and Methodius Church was planned as a memoriam of Saint Methodius (1000 years since his passing to Christ) planned to be build earlier in 1890s but delayed and later built in memorium of the Christianization of Bulgaria and 1000 years passed since the glorious Rule of King Simeon I, the Church building works completed thanks to Metropolitan Simeon in 1926 (the building works were delayed from 1897 'till 1918) A.D..

Very near the Church, one can see the ruins of another old Monastery dating again from the IX – X century, the construction is of a massive craved stone and was a masterpiece in the X century.

As an ex monastery the place can be considered holy as well and some people says it along with Veliki Preslov are a Gracious Energy filled places that can positively impact the human spirit.

Very near is situated also an Archeological Museum containing some of the artefacts found in Patleina, Veliki Preslav and the surrounding monasteries  – the museum is in the list of 100 Bulgarian National Museums and Landmarks. 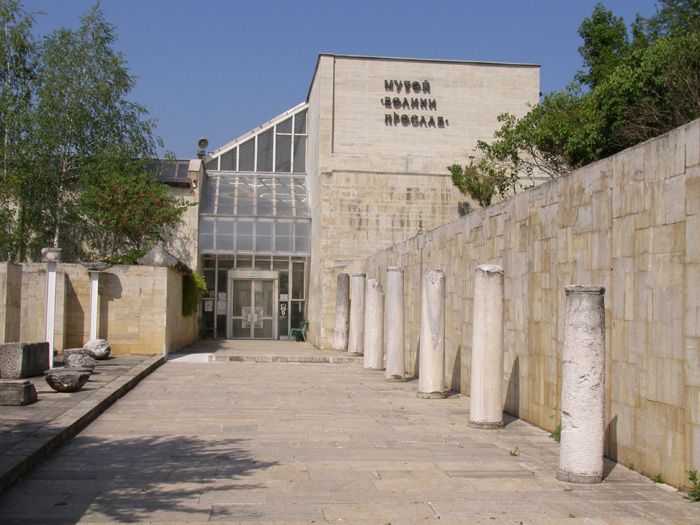 The museum has a very unique collection of artefacts and the entrance costs of 5 EUR is bearable, note that it's closed on Sundays.
The museum has an overall of 35 000 objects but unfortunately only 1700 artefacts are shown for the visitor, it is notable for holding one of the largest collection middle age Byzantine insignias, The Preslav Golden Treasure, bronze silver and ceramic artefacts.

The archeologists so far has determined that Veliki Preslav with all its Past Greatness and enormous territory, Churches and surrounding monasteries nearby has been planned as a rivalry Empire city to Constantinople and Preslav will definitely impress you if you're keen into archeology and history, hope you visit it soon, Enjoy! 🙂