Beowulf (pron.: /ˈbeɪ.ɵwʊlf/; in Old English [ˈbeːo̯wʊlf] or [ˈbeːəwʊlf]) is the conventional title[note 1] of an Old English heroic epic poem consisting of 3182 alliterative long lines, set in Scandinavia, commonly cited as one of the most important works of Anglo-Saxon literature. It survives in a single manuscript known as the Nowell Codex. Its composition by an anonymous Anglo-Saxon poet is dated between the 8th and the early 11th century. In 1731, the manuscript was badly damaged by a fire that swept through a building housing a collection of Medieval manuscripts assembled by Sir Robert Bruce Cotton. The poem fell into obscurity for decades, and its existence did not become widely known again until it was printed in 1815 in an edition prepared by the Icelandic-Danish scholar Grímur Jónsson Thorkelin. In the poem, Beowulf, a hero of the Geats in Scandinavia, comes to the help of Hroðgar, the king of the Danes, whose mead hall (in Heorot) has been under attack by a monster known as Grendel. After Beowulf slays him, Grendel's mother attacks the hall and is then also defeated. Victorious, Beowulf goes home to Geatland in Sweden and later becomes king of the Geats. After a period of fifty years has passed, Beowulf defeats a dragon, but is fatally wounded in the battle. After his death, his attendants bury him in a tumulus, a burial mound, in Geatland.

I couldn't suppress my impression of Beowulf being naked, fighting the monster. Actually on many occasions he is either naked or half dressed its mostly ridiculos 🙂

Readable English translation of Beowulf can be downloaded and read from here
I try reading the poem, but  it is really difficult and it was too darky for me so I couldn't complete it all. Hopefully for those who are ancient English freaks it will surely be of great interest.

Besides above  movie, there is a newer movie retelling Beowulf epic story from 1999. I found it in youtube. I include it here for those who want to get a better visiolization of the movie. 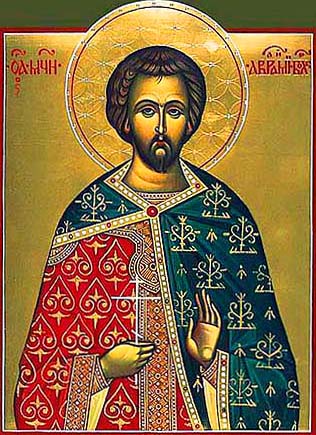 What is unique about this saint is that he used to be born and grown in the tradition of the Muslim (Islam) faith and by the great providence of God he converted to the true faith of Christianity.

St. Abraham of (Bulgaria), was born in Volga Bulgaria in a community of Muslim Volga Bulgars (old Bulgarians). Nowdays Volga Bulgaria is located in Tararstan Russia. The saint used to be an islamic merchant and His martyrdom for Christ happened in March 6 (according to old Church Calendar) in year 1229.

He used to live in a very complex situation, when the islamic influence of Arabs in his motherland was quite severe. St. Abraham of Bulgaria used to be a rich man for his time, he was a merchant.
Because of the trade he travelled a lot to the Byzantine Empire and the Orthodox Christian principalities. This give him an opportunity to get to know Christian faith little by little.

He was accustomed to a wordly life but still always accepted strangers and similar to the Old Testamental father of nations st. Abraham he's been very hospitable to poor people.
By Gods grace he become convinced Muslim faith does not teach a true faith to the one God,  being pointed by God himself towards the right salvation way, he accepted Jesus Christ as a Lord and Saviour being baptized and hence converting to the truthful Christian faith.

His Christian baptizmal was accepted from Russian traders, who lived nearby the place of Great Bulgar.
Being baptized in the Christian faith Saint Abraham of Bulgaria not only confessed Christian faith across his fellow people, but he also led very harsh (ascetic like) life, wearing secretly below his clothes a heavy chains during his worldly travels. The profit he made from trade often he shared with the poor.Once he went for a trade to the city of Great (Bulgar) Bulgar. There he was arrested because there was a rumor, he cursed (islamic faith believed prophect) Mohammed and the muslim faith. 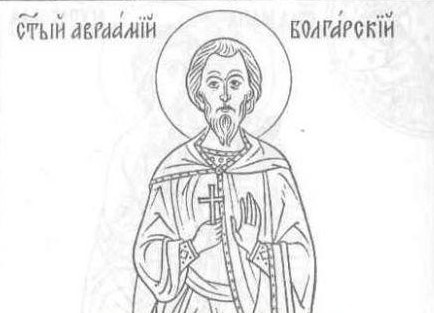 Muslims catched him and started convincing him to reject Christ, accusing him at a blasphemy. Abraham was not scared of muslim threats of expel and even putting to death. As Muslims failed to force him "by words" to convert back to Islam, they took him and put him in jail because of his denial of (their) Islamic faith.

In jail he was tortured but, they failed to convince him to deny Christ, seeing they have no way to convince him to accept Muslim faith once again, saint tormentors first cut his hands, then the legs and finally disgraced by his boldness and continues confession of Christ they beheaded him.

Soon afterwards the city of Bulgar was captured and burned down by the Mongols, many people in that time saw this is Gods punishment for the innocent shed blood of Abraham the Bulgar.
The local Christians took his body and buried him in the Christian cemetery of the ancient city of (Bolgar) / Bulgar.
On the place, where the saint was buried, a healing water spring emerged. The first man who received healing from this spring by Christ's grace was a muslim. 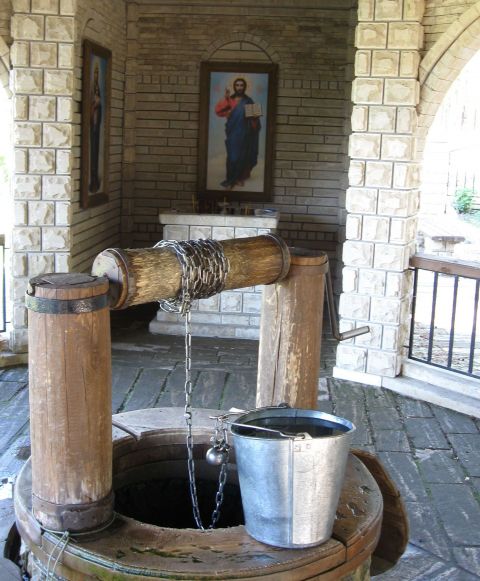 Great healing miracles happened on the saint grave. Local Christians took their relatives and bring them to the saints grave for a miracle healing and a prayer intercession of the saint. A rumour about the saints great graceous grave quickly spread and some people told about the miracle healing grave f st. Abraham to prince Georgi / (George) Vsevolodich.One year later again on 6th March 1230, the body of the saint was carried in the city of Vladimir, where the prince and his family, the Vladimirsk Bishop, the clergy and the local people received the holy relics of st. Abraham (of Bulgaria). The holy relics was kept in the local church "Dormition of Mother Mary" on 6th of March in the year of 1230.

The co-memoration of st. Abraham the Bulgarian is being observed in the Bulgarian Orthodox Church, since very ancient times.
Nowdays both Christians and Muslim celebrate the saints feast.

Interesgingly, nowdays St. Abraham the Bulgarian is venerated as a saint by both Orthodox Christians and by Muslims. Many Muslims from Turkey and other muslim countries come each year for the saints feast day to pray and ask for healing or prayer intercession to God.

Even to this very day people receive by Jesus's grace through saint Abraham the Bulgarian's prayers – a various incurable disease healings. The healings occur on the same holy spring where the saint was buried. Many people are also healed from incurrable diseases through the veneration of the incorruptable saint holy relics kept in the Church Dormition of Mother Mary.

Fifth Sunday of the Great Lent. And the Venerable Mary of Egypt Orthodox Church feast

The Fifith week and the fifth Sunday of Lent is preparation for the Holy Week (right before Eastern).
In the Gospel readings on the fifth Sunday it’s being told how God on his way for Jerusalem revealed for a time to his deciples (The Holy Apostles), that his way is the way of the cross, the suffering and death and that the high-priest and the jewish scripture interpreters will betray him, will violate him spit at him, beat him and crucify him and most importantly that he will be Risen on the third day.

The pupils has been terified walking with him on the way to Jerusalem and haven’t really understood the Lord’s prophetic words.

The mother of John and Jacob for example asked the Lord that her sons be allowed to sit on his right and on left side of the Lord’s throne, without knowing like the rest of the desciples that the Lord’s way of unbelievable suffering, which the desciples comprehends a bit later.

The cross’s road of suffering is a predetermined path not only for Christ’s desciples but for the whole Orthodox Church in general and for all the believers inChrist’s name.
God does alone has carried out suffering for the human sin and sinfulness and bears it together with man entering and changing human’s history and completing his redemption for us on the cross.
On this land a man without a revelation of God, never could understand that God is love, that God is good, even if they are already talking about two thousand years all the saints and Fathers of our Church.
God is love and sacrifice himself for man, so our suffering is noble by his feat, carried out for good, because the truth because of the transfiguration of man. His sacrifice is the noblest sacrifice of this world.

But in essense as many ordinary people say in the suffering there is nothing good and noble. The sufferings however after Christ’s sacrifice in his “house-building” plan to transfigurate the man’s personality does prooved miraculous for many Christians throughout the centuries.

A very light example of such a transfiguration of the human’s personality (soul) can be clearly seen in the example of saint Mary of Egypt’s living whose memory do celebrate in the Bulgarian Orthodox Church today (in the Fifth Sunday of the great Lent).

St. Mary of Egypt has lead a very unusual way of living, which is really striking to be comprehend even for us the modern Christians.

Her living is a God’s omen for all generations of Christians and is in clearly distinctive with ours.

As we can read in short in her living, from a very rich and prosperous prostitute touched by Christ’s love after entering an Orthodox temple by the Mercy and the great prayers of the Theotokos (Virgin Mary) she has decided to loose all earthly preasures and all the old unrightous way of living and start living a saint hermit life in the desert, she has fought the devil’s temptations and the consequences of sin and God’s wrath for the sinful way of live she has lead for so monay ears before she has turned to Christ in humility in about 25 years alone in the desert!

That’s clearly a God’s great miracle and faith simulator we should thanks God for ..

Her living is a very bright example that we should not despair ourselves about our salvation, and that God takes care for everyone who puts his faith in him and decides consciously to let behind his sinful way of living and evil and starts fighting with it.

God grants us our earthly living and waits throughout our whole earthly live for us to turn back from our sins and change for good.

St. Mary of Egypt is a great example for us who belief in Christ today about how much a repentance could work out in our lives.

From one of the greatest city sinners she has turned into a saint by repenting for her previous sinful life for 25 years.

After the end of her great trial period in the desert, seeing her great repentance God has granted us all the gifts of healing and miraculness of the Holy Spirit.

I would not stop into details of the great saint’s living I’ll just say it’s worthy to check her living in http://orthodoxwiki.org/Sunday_of_St._Mary_of_Egypt and be seriously astonished!

Let us take st. Mary of Egypt for a leading example in our lives and hope that God will have mercy on us and grant us her humbleness and repentance for our great sins we stand in daily ..

Save us Oh Lord by the prayers Saint Mary of Egypt!