Skype on Nokia ExpressMusic 5800 with Fring

A friend of mine has bought a new Nokia Express Music 5800, yesterday evening
He wanted to use skype on his nokia so we played a bit together in installing an
app that provides skype on that mobile phone. There are two applications which run
on the phone.1. Skype Lite downloaded from SkypeÃƒÂ¢Ã¯Â¿Â½Ã¯Â¿Â½s mobile phone version download page
However, the selected version was pretty old it was for Nokia 7370.
This solution worked out, unfortunately there was no skype voice calls on it, niether video calls.
2. We tested Fring For convenience reasons I did a mirror of the NokiaÃƒÂ¢Ã¯Â¿Â½Ã¯Â¿Â½s ExpressMusic 5800, which by the way runs on top of Symbian OS ver. 9.4.Here is a link to the Fring for Nokia ExpressMusic 5800
We tested also the fringÃƒÂ¢Ã¯Â¿Â½Ã¯Â¿Â½s skype protocol abilities, trying out both video and audio calls which prooved to work okay.
Nevertheless, during playing with the fring the program crashed once and required to be rebooted to return to proper operation mode.
Credits for this post go to Nomen who did most of the work on testing fring on his phone.
In the mean time tonight, a new year is approaching. LetÃƒÂ¢Ã¯Â¿Â½Ã¯Â¿Â½s all hope this year will prove to be peaceful, fruitful and
full of grace for every inhabitant on earth.
In regard to the new year approaching I Wish you a Really, Really Happy and Peaceful New Year!

Reading Time: 2minutes
Yesterday the day was quite strained. We were prepairing for few weeks to host the new website of pozvanete.bgcreated by our firm Design.BG, so yesterday in 9:40, our project manager has called and said pozvanete.bg’s DNSrecord is already changed to point to our server, but there is a problem while http://www.pozvanete.bg opensnormally, http://pozvanete.bg opens DBG’s 404 error page. I remembered that this is due to a configuration of theserver cause there was some SEO stuff in the past on the server, so I was able to fix the problem quickly.The problems started to come after that. The machine where we hosted the site (and it was the only site there was1.6ghz AMD with 1 giga of RAM). Unfortunately 30 minutes after it started to open from our server I observed themachine’s cpu stays idle 0.0 all the time and the site responds very slowly to browser requests. I tried to tinkerit changing things from the webserver configuration file with no luck. I spoke with my boss explained him the situationso he decided we’ll move the site on another machine which is ( 3.0 Ghz Intel ), and the next week we’ll move the siteagain to a rack machine colocated in Sofia in Evo Link. It took a lot of conversations over the phone and talk with Vladibefore we moved completely the site on the new machine before that I have to recompile the machine’s current httpd and php to match the requirements of the site but Praise the Lord in the everything went smoothly and we were able to move the site completely the site to the new location. I’ve speak with Pozvanete’s administrator to change the DNS records to point to the new machine and in 6:00 o’clock the site could be seen from the new server. In the mean time Bobb has bought an IBM rack he quickly packed it and send it to Sofia. Among all this a lot of collegues from the office found me urgent work, I got a complaint about a problem with the mails of propertyinvestld the guy claimed our webmail sent the .doc files as winmail.dat which as I suspected was not true. But Praise the Lord everything went smoothly in the end. In 8:00 o’clock we go out of home with Nomen and decided to go to the Mino’s coffee to see Sami cause he’s has come back from Sofia. Mino’s coffee was a lot of fuller than usual, and it was very smoky, Tsetso speak a lot about art and history as usual, I was bored as usual etc. etc.After that we had the idea to watch a film in Nomen’s home but my Aunt called and said if I have time it will be good to see my grandma cause she is not feeling well (they made her eye surgery 3 days ago). I went to his home and stayed with her it’s awful she is such a nice lady and she’s suffering so much. She said how bad she felt nobody went to the hospital to see her for 3 days ( First I was angry to my mother .. then I calmed down ). I realized all the world is in birth pains as written in the Bible so I praid a lot to the Creator to have mercy over my grandma. Then I tried reading The Bible for some time but I was too sleepy and I went to bed. END—–

How to make screenshots on Slackware Linux with XFCE graphical environment

For the latest Slackware Linux release which as of time of writting is 13.37 xfce4-screenshooter-1.7.9-i486-3sl.txz can be download from here


By the way, I haven't used slackware for a long time so in the mean time since Slackware 13, the default slackware packages format .tgz is now substituted with the newer .txz (better compressed .txz). The old .tgz was simply a tar archive with DEFLATE gzip. The newer .txz packages bundled with newer slackware releases are using the LZMA2 (XZ) chain algorithm for compression. LZMA implies higher compression than even bzip2 and this is the reason why Patrick Volkerding – the one man army man behind Slackware decided to use it.
The reason Vollerding choose using .txz is slackware network distribution will load up less the networks and will take less time for downloading extra slackware packages via the internet. The .txz also reduces slackware main CD size so more packages can be contained in the same 700MB sized slack install CD.

Anyways now back to the installation of xfce-screenshooter.

Once installed to runit use the Xfce menus:


Next you will see the xfce-screenshooter program to pop-up:

To take a snapshot of the screen use: 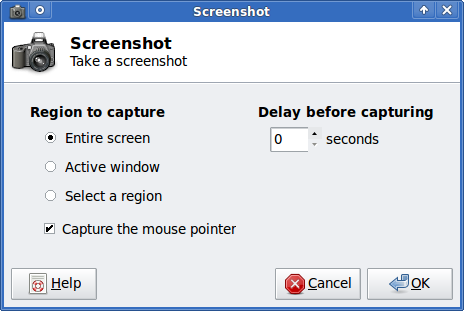 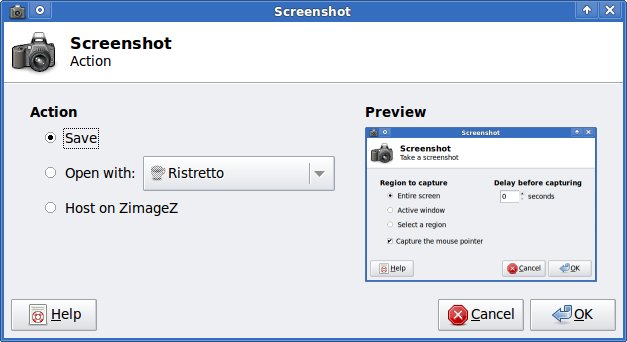 Reading Time: 2minutes
I’m currently writting a script which is supposed to be adding new crontab jobs and do a bunch of other mambo jambo.

By so far I’ve been aware of only one way to add a cronjob non-interactively like so:

Though using the | crontab – would work it has one major pitfall, I did completely forgot | crontab –OVERWRITES CURRENT CRONTAB! with the crontab passed by with the echo command.
One must be extremely careful if he decides to use the above example as you might loose your crontab definitions permanently!

Thanksfully it seems there is another way to add crontabs non interactively via a script, as I couldn’t find any good blog which explained something different from the classical example with pipe to crontab –, I dropped by in the good old irc.freenode.net to consult the bash gurus there 😉

So I entered irc and asked the question how can I add a crontab via bash shell script without overwritting my old existing crontab definitions less than a minute later one guy with a nickname geirha was kind enough to explain me how to get around the annoying overwridding.

The solution to the ovewrite was expected, first you use crontab to dump current crontab lines to a file and then you append the new cron job as a new record in the file and finally you ask the crontab program to read and insert the crontab definitions from the newly created files.
So here is the exact code one could run inside a script to include new crontab jobs, next to the already present ones:

The above definition as you could read would make the new record of */5 * * * * /root/myscript.sh >/dev/null be added next to the existing crontab scheduled jobs.

Now I’ll continue with my scripting, in the mean time I hope this will be of use to someone out there 😉