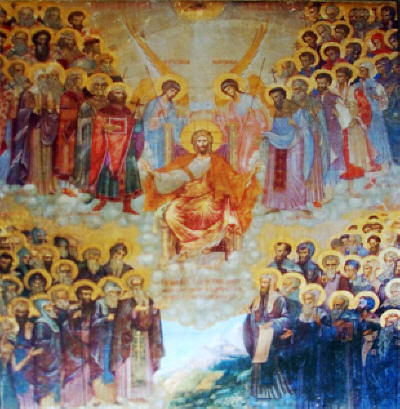 Today it’s the Sunday in which we the Bulgarian Orthodox Christians celebrate The Day of All the Bulgarian Saints
We have plenty of saints in our Bulgarian Christian history, many known and even more unknown ones. That feast is actually one of the greatest local church commemoration of the Christian saints who gave their life for the building, growing and preventing of the orthodox bulgarian church and the orthodox christian faith througout Bulgaria’s lands.
An almost complete list of the orthodox bulgarian saints can be seen here
However many are not mentioned since there are no historical documents about the countless victims (martyrs) of Ottoman muslics who were beheaded or violently killed because of his refusal to accept the Islam.
Here I will just mention few of the saints that are mostly venerated in the realm of the bulgarian orthodox christian faith:

1. st. Enravota (Prince Boyan)
is considered the first Bulgarian Saint martyr who gave his life to show hthe truthfulness of the Christian Orthodox faith.
His most notable speak is also a prophecy concerning the bulgarian orthodox church which was made before his martyrdom for Christ.
The prophecy saint Enravota has made about the Christianity establishment in Bulgaria is as follows:

This faith, which I now die for, will spread and increase across the whole Bulgarian land, although you may wish to oppress it with my death. In any case, the Sign of Christ will establish itself and churches of God will be built everywhere and pure priests will serve the pure God and will deliver “sacrifice of praise and confession” to the invigorating Trinity. Idols, and priests as well, and their ungodly temples, will crumble and will turn into nothing, as if they had not existed. Besides, you alone (to Malamir), after many years, will cast away your ungodly soul without receiving anything in reward for your cruelty.

2. St. Jonh of Rila (wonderworker) was a hermit in the Rila mountain who is a patron saint of the Bulgarian Orthodox Church. He is notable for his great spiritual purity achievement in his anchoretic life. Many miracles and healing has been received by people who has prayed and asked the saint to intercede in their behalf to God. He is known as the first bulgarian monk, and as an initiator of the first bulgarian orthodox christian monastery.
His uncorruptable body is found for pilgrimage until this very day in the monastery he became a founder of Rila Monastery .

2. St. Brothers Cyril and Methodius Who were the saint brothers who venerated for enlightening the slavonic nations with writting letters. They’re actually the inventors of the old Bulgarian also known as Old Church Slavonic. They and their followers were the first to translate the holy bible into the newly created language – the Old Bulgarian.

3. st. Knyaz (King) Boris-Mihail (Boris-Michael) . He is known for his baptism of the Bulgarian Nation and the initiator of the creation of the Bulgarian Orthodox Church as well as a brilliant statesman.
After baptising most of the bulgarian intelligentia and rooting up the Orthodox Christian faith in Bulgaria, he abdicted voluntery from his throne, leaving his son (Vladimir) to rule Bulgaria and started a voluntery monastic life in poverty.
When his governing son tried to reinforce back the old pagan bulgarian Tengriism belief (e.g. the belief in Tangra (Tengri) he left the monastery took back the power (defeating his son) and blinded Vladimir.
Then he returned back to the monastery and spend his remaining life as a monk.

4. st. Clement of Ohrid was one of the Seven Bulgarian Apostles
Born in 840, a Slav from southern Macedonia, he established a monastery at Okhrida and a bishopric at Velica not far away. He is regarded as the founder of this primatial see and the first Slav to become a bishop.
His extensive apostolate took the form of education of the clergy and of the laity, to whom he preached a series of sermons in Slavonic, suitable for neophytes and explaining the principal feasts of the liturgical year. Clement died at Okhrida on 27 July 916.
5. St. Nahum ucceeded St. Clement of Ohrid as bishop. Converted in Moravia by Cyril and Methodius, he journeyed with them to Rome and helped them with their translations into the vernacular: he is venerated in Russia as well as Bulgaria. Other companions of Clement called Sava and Angelar are also venerated with him. In different times and different places they all contributed to the fulfilment of the missionary plans of Cyril and Methodius.
6. Saint Zlata of Meglen has endured a martyrdom for Christ. She refused to accept muslim faith and has firmly confessed her Orhtodox Christian faith.
She was given many chances to accept muslim faith by some Turks and therefore save her life but she refused and was cast into a prison for 3 months flogging until her blood soacked the ground.
Finally, they suspended her upside down and lit a fire, to suffocate her with the smoke; but God was with Zlata, and gave her strength in suffering.
At last they hanged her from a tree and cut her into small pieces. Thus, this brave virgin gave her soul up to God, and went to dwell in Paradise on October 13, 1796. Pieces of her relics were taken by Christians to their homes for a blessing.

7. 26 Martyrs of the Zographou Monastery on Mt. Athos at the hands of the Crusaders they have endured martyrdom for Christ, from the Roman Catholic Crusaders. Though the were warned that the enemies of Christ are coming to the Zograph Monastery they refused to leave the place and was burned alive by the unpious Crusaders.
There is many others to be mentioned but I neither have the knowledge nor I’m worthy to speak about them.

Let by their Holy Prayers God have mercy on us the sinners.