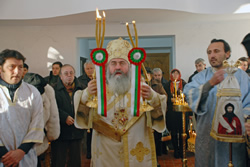 Below I post the only picture I have of this beloved brother in Christ ipodqkon Georgi You see our brother on the right side of the Metropolitan of Varna and Great Preslav Kiril.
Georgi served as an ipodqkon in the Church Holy Trinity here in Dobrich and was well known and loved by the Church community there.
He also was a really good loving and decent man completely devoted to our Orthodox faith, standing firm in the faith.
He worked for many months in Holy mount Athos as a repair workers cook, where he cooked for about 70 people.

Before he worked in Holy Mount Athos, he used to be a restaurant chef in Sandanski.
Since about 6 or 7 months time he become sick, his assumption for the sickness was that it might be of a bad sploit old food which was consumed by accident by him and the rest of the workers.
He shared with me that all of the workers felt sick after eating it but all of them except him has vomited the food afterwards.

He gets poisoned and urgently transfered back in a hospital in Bulgaria. Consequently he went under a lot of examinations which failed to proof the exact type of sickness he was suffering from.
He was prescribed to eat only fasting food (some bread, apples, oil and a few of other light meals). He was prescribed a lot of medications he tried but none of them really helped him and he on a numerous times has shared with me he is not feeling weel, though I was not really believing his health situation is so severe.

The exact state he was experiencing was infirmity, headaches, skin rushes, he could hardly stay on his foots for more than few hours, as lastly he shared with me.
He also got rashes from most of the food he consumed. His life was a real tragedy as I remember I saw him just 3 weeks ago and he was about to go to Sofia for some examinations.
Even though his hardships in life, he was not loosing faith and believed all that was happening was according to God’s will and did accepted his sickness with humility.
During the about 7 months he spend in sickness he was many times being hospitalized in Hospitals in Dobrich, Varna and Sofia.

In each of the hospitals he spend a couple of weeks on injections and live sustaining medical systems.
During this periods, when he was in his home here in Dobrich somewhere in Balik, he often chatted with me over Skype, giving me good spiritual advices.
He also often called my landline phone to consult on various stuff concerning his problems with his notebook. As in the last days he could only lay and use the computer.
The computer he had was one of the few possessions he had, in his last days he did not have money at all as all of his savings were spend for examinations and drugs…

I remember still one time when I walked with him towards the bus-station and I was in a terrible desperation, being faithless.
He instructed me I should pray and told me not to despair and stop smoking as I was nervously smoking…
He lived a life similar in many ways to the life of the saints. He had a strong love for monasticism and had the desire to either become a monk or priest.
He told me many miraculous things he has seen and heard when he was in holy Mount Athos.

Last time I saw my beloved brother Georgi near the Church saint George (sveti Georgi) and for my grief I behaved partly as an asshole, and I repent I was not behaving better.

In this last time I saw him he shared for his great gratitude for God that he was allowed to visit the holy Lands (Jerusalem) The Holy Sepulchure church in Jerusalem.
Even in this last days, obviously living in infirmity he had his strong dedication to the Church and come to the Church services for Resurrection / (Easter) and was mostly being present on holy liturgies in Sundays.

The last time I saw him in the Church he did the Gospel and red some psalms. He was always serious and looked for the spiritual in everything, very rare kind of person to meet today.
Georgi blessed me with a couple of small icons (two copies of icons of Saint Georgi [Fanailska and Araviiska] miraculous icons from mount Athos as well as an icon picture of the Altar of Holy Sepulchure Jerusalem church), and I pray in front of them when I pray to God.

These are two of the icons brother Georgi give me as a gift and blessing from Holy Mount athos: 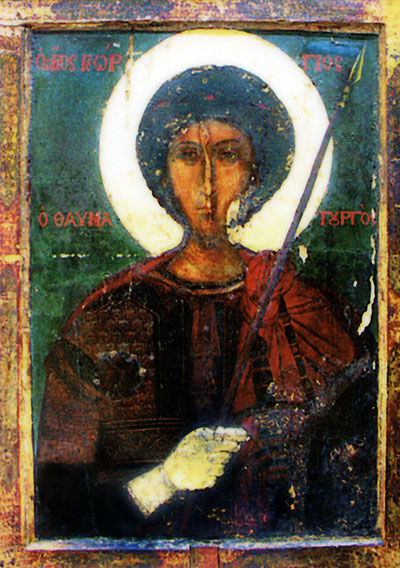 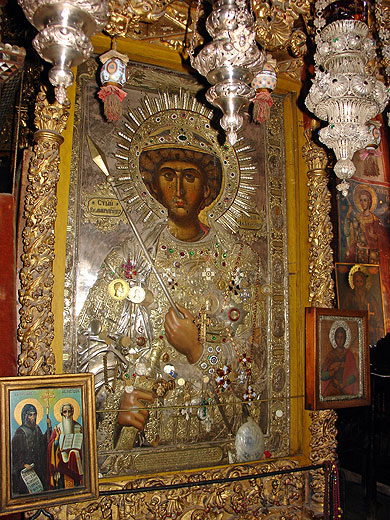 My beloved brother in Christ Georgi (God Forgive him / Bog da prosti) has also blessed me with a wonderful digital movie about the Bulgarian monastery in Holy Mount Athos Zographus. The movie about Zographus is explaining thoroughfully the history of the holy cloister and showing the originals of the Holy miraculous icons and monks who spoke about today’s spirituality and what is it to be a monk on holy mount athos (one of the most holy places on earth today).

I know also that Georgi was a wonderful a really talanted cook (even a chief) as he was responsible to take an eye for 6 cooks during his work as chief in Sandanski.
In the just recently passed away Resurrection day, he has cooked an Easter cakes and banica as well as some other meals using a holy mount athos recipee.

After the Resurrection early Holy liturgy was over we ate together with the brothers and sisters from Georgi’s delicious meals praising God and rejoicing for our Lord has Resurrected from the dead…
I will really miss my namesake (adash) as I used to call him often. I just hope one day I would see him again if by God’s grace I’m allowed to enter Heaven.
Just about 1 year ago his mother passed away, then some few years before his father has passed away and now not more than a year after his parents he is gone as well.
When I look over this tragedy it’s really hard to understand it but using the Holy Scriptures, one can easily understand why it happened that way as,

His early departure from this life is according to the words in the Holy Bible in Isaiah 57:1:

I hope ipodqkon Georgi will find grace in front of God to pray for me the sinner and the rest of us who’re still living in ours sins on this sinful earth.

Please Orthodox Brothers and sisters pray for ipodqkon’s Georgi’s soul that our merciful God forgives him his trespasses and grants him an ever lasting joy with all the saints in the heavenly church, in paradise!

God forgive you our and my beloved brother Georgi! Let your memory last forever. Amen! 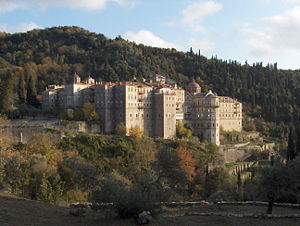 A friend of mine who is a devoted Orthodox Christian (and ipodqkon Georgi), regularly visits Holy Mount Athos as a pilgrim.
On a few times he has been there serving to the workman who are currently restoring a number of monastery building which has been abandoned for quite some time.

Every Sunday morning he also goes to the Monastery Church St. George Zograph for the monks Holy Liturgy service.
He send me few recordings he made with his phone during the Holy Liturgy monks chanting. The recording’s quality is quite raw as however still it’s very invaluable piece of spiritual music, which I think every spiritual person will highly regard and enjoy.

Here are the 12 songs which he send me over skype I hope the songs, will be enjoyable and a spiritual blessing to some Christian brothers and sisters out there: