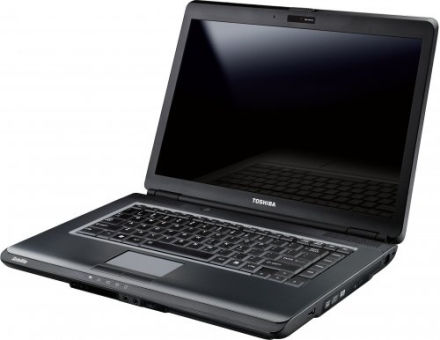 Today I had the task to Install Ubuntu GNU / Linux on Toshiba L300 PLSBGE Laptop.

I had already installed Windows Vista Enterprise on the notebook. Thus I used Acronis Disk Directory Suite to partition the harddrive for Ubuntu even though I could have used the gparted included on Ubuntuâ€™s installation CD. Iâ€™ve asked specificly if
I could use the Ubuntu CD to repartition my hard drive in #ubuntu in irc.freenode.net.
The answer was positive itâ€™s absolutely safe to resize an NTFS partition using Ubuntuâ€™s installation LiveCD and gparted.That seems like a good news for all of us the free software users / enthusiasts / hobbyists etc.
I hated the default Ubuntu behaviour it automatically decided to install itself on a automatically created 2.5 GB partition.
I thought it wonâ€™t be so dumb to install itself on such a tiny partition. Well guess what I was wrong IT WAS SO DUMB!
Even though I had already 80 GB ext3 partition. Ubuntuâ€™s default behaviour was to install on an automatically created 2.5GB partition.
Right after the installation I was stunned just to realize there was no free space on the drive where the dumbass installed itself.
After that I had some issues deleting the already cretead partitions, which for some reason messed up. Luckily the good old fdisk fixed the situation so I could easily delete all the partitions except the vista and recreate them again using gparted with Ubuntuâ€™s install LiveCD. The install was completely flawless. Everything worked out of the box, no external efforts to fix broken stuff like usually happens in Linux fantastic! The only broken thing was that switching to plain console with ctrl+alt+f1 would visualize a non working display output and I couldnâ€™t see the ttys at all. That wasnâ€™t such a hassle since the system is planned to work only in GUI mode. I guess Ubuntu is going through a real development with a positive end results. Even external USB printer Canon PIXMA IP3300 worked by simply plugging it in. For some weird reason to make the printer work correctly I had to use driver for Canon PIXMA IP3000. Anyways it worked with it and the printer started printing correctly even though officially on some of the linux printers databases itâ€™s reported the printer wonâ€™t work correctly never ever.ENDâ€”â€“

I just read an article in Linux-Magazine on Advanced File Management named – "Beyond the Basics". Most of what the article says is pretty trivial and known by any Linux enthusiast average user and administrator. There was one command mentioned shred which is probably not so well known among Free Software users shred allows the user to "secure delete files" / from the hard disk irreversible.

The tool is part of coreutils package and available across mostly all Linux distributions including Debian / Ubuntu debian derivatives and the RedHat based distros CentOS, Fedora, RHEL etc.

Just for info for those who don't know how to check, to which package a command belongs with rpm and dpkg, here is how;

Here is how to delete a sample file ovewritting 3 times (-n2 – means 3 because in comuters we know we countr from 0 – 0 1 2 3), the z option fills up with zeros after overwritting the file ( just like seen on paste), -v option shows verbose what shred is doing and -u option truncates removes file after overwritting

One common use of shred is by sysadmins who has to prepare old server containing lets say client data (SQL) – mail boxes or just file data and then sell it to third parties making sure data will be un-restorable for the new owner. Also shred is used a lot by crackers who set up "time bombs" activated on user activity or inactivity to destroy evidences in case of crackers PC is being captured by police. Though shred cannot guarantee 100% that deleted data can't be recoved within a special data recovery lab in most of cases it is enough to assure data with it will be almost impossible to recover.

If you’re experiencing problems with maximising flash (let’s say youtube) videos on your Debian or Ubuntu or any other debian derivative.
You’re not the only one! I myself has often experienced the same annoying issue.

The flash fullscreen failures or slownesses are caused by flash player’s attempts to use directly your machine hardware, as Linux kernel is rather different than Windows and the guys from Macromedia are creating always a way more buggy port of flash for unix than it’s windows versions, it’s quite normal that the flash player is unable to properly address the computer hardware on Linux.

As i’m not programmer and I couldn’t exactly explain the cause for the fullscreen flash player mishaps, I’ll skip this and right give you the two command lines solution:

This should fix it for, you now just restart your Icedove (Firefox), Epiphany Opera or whatever browser you’re used to and launch some random video in youtube to test the solution, hopefully it should be okay 😉 But you never know with flash let’s just hope that very soon the open flash alternative gnash will be production ready and at last we the free software users will be freed from the evil “slavery” of adobe’s non-free flash player!
Though this tip is tested on Debian based Linux distributions it should most likely work same in all kind of other Linuxes.

The tip should also probably have effect in FreeBSD, though the location of the adobe directory and mms.cfg should probably be /usr/local/etc/adobe, I’ll be glad to hear from some FreeBSD user if including the OverrideGPUValidation = 1 flash option to mms.cfg like below:

would have an impact on any flash player fullscreen issues on FreeBSD and other BSD direvative OSes that run the linux-flash port.