The Legend of the Christmas Tree and Why do we put Christmas trees at home in Christmas time? :) 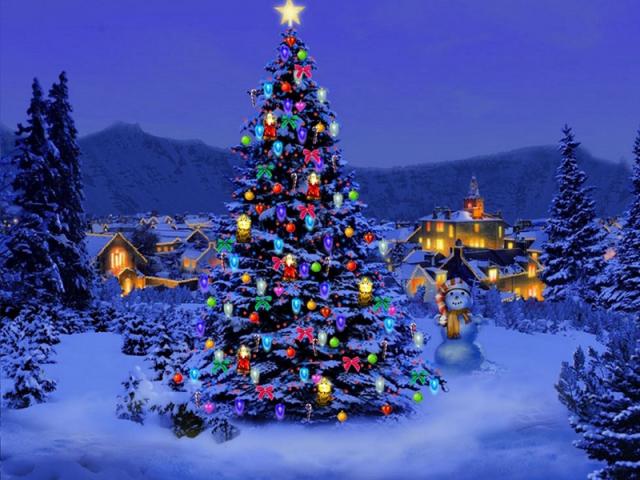 Christmas has just passed away. As a Christian I was curious what is the reason in so many Christian countries, we decorate Pine trees and I did a quick research on the topic. In this small article, I'll present my findings.

Observing the Christmas Pine Tree tradition has been quite ancient and probably according to many sources dates back to the XIIth century.
The first written records of a Christmas tree are of an anonymous Frenchman who visited Strasbourg, Germany in 1601. His description of the decoratd pine tree says like "wafers and golden sugar-twists (Barley sugar), roses cut out of many-colored paper, apples, gold foil and sweets."

Later in the 1800s, the local German Christmas pine tree tradition was spread across America by German emmigrants.
In UK the Pine tree decorating tradition appeard in 1841, where a royalty (Prince Albert) decorated his castle (Winston Castle).

A little later after the Queen Victoria adopted the pine tree, United Kingdom citizens started to decorate pine trees for themselves, folliwng the highly regarded Queen.
Usually the pine tree has historically been decorated with gifts as well as an Bright star is put atop.

One of the Christian interpretations for the Christmas tree is that it represents the same Cross (tree) on which Christ was crucifixed. Then after Christ's resurrection because of (or through that) tree, the humanity received the Lord big spiritual blessings. These blessings are represented by the gifts decorated on the Fir tree. The pine tree itself is in Christianity a reference for the symbol of Salvation that we received came from the Holy Cross, where our saviour was crucified.

The Fir is decorated with lights to represent the joy and the lights of Christmas (that burns in our hearts), the star atop the tree is a reminder of the Star that rised in the East during the night of Christ's birth as we read in the gospels. 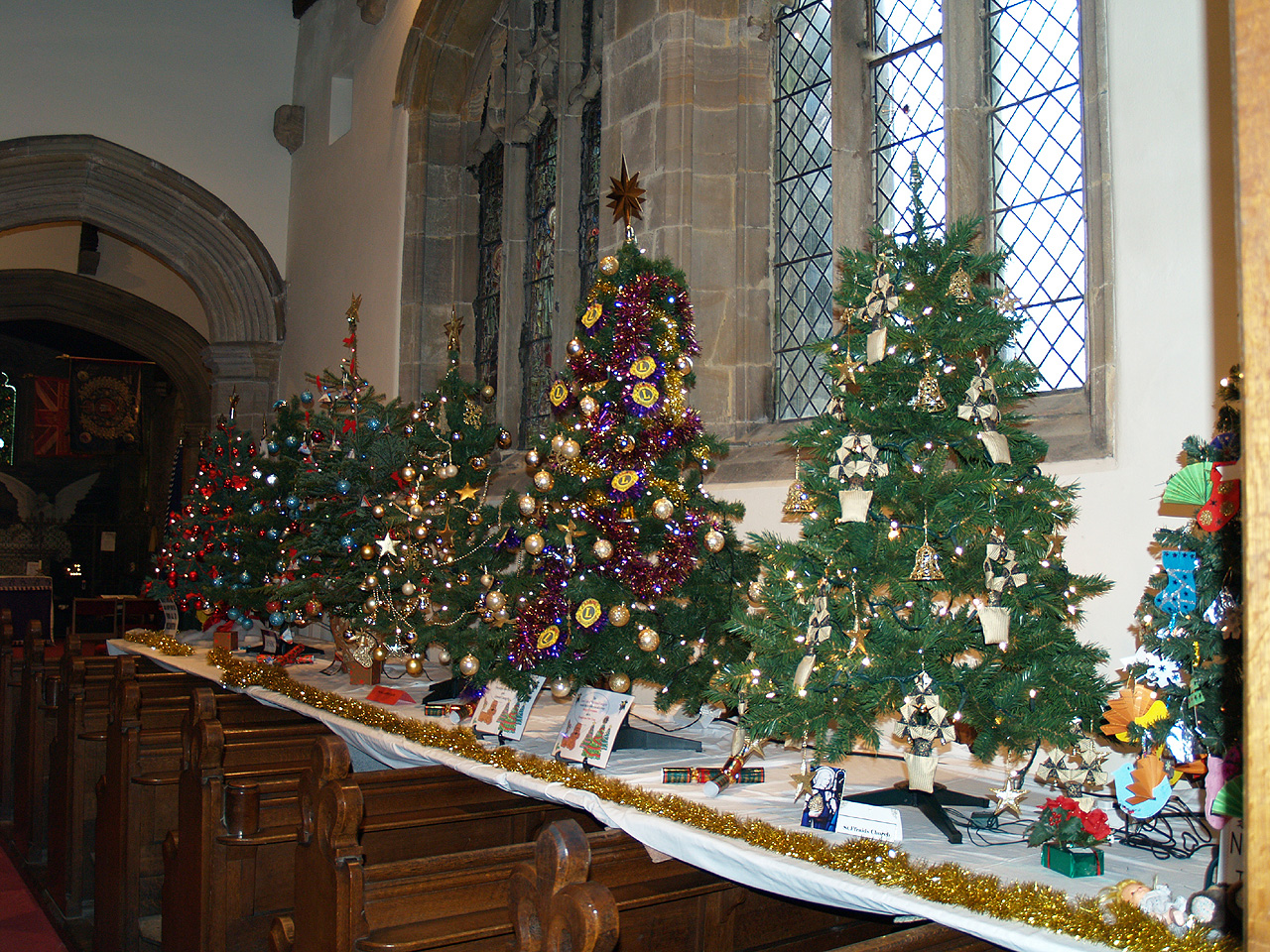 Decorating Pine trees is commonly observed mostly in Roman Catholic Church and often followed by some protestant denominations and less used in Orthodox Church (though this is changing nowdays).

In Eastern Europe, the Christmas tree appeared quite 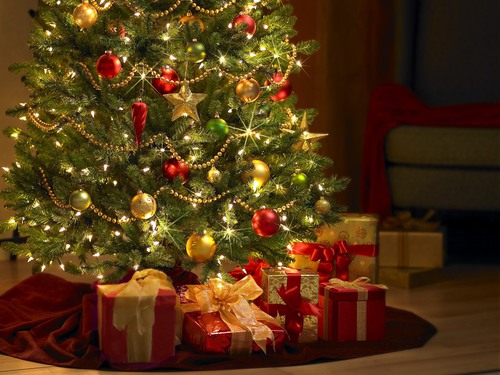 late and the whole concept was unknown in the Orthodox Christian countries, just until the end of the 19th century.

With the recent severe globalization the pine tree was silenty adopted in almost all parts of the world, including even communist countries and even sometimes in muslim ones. 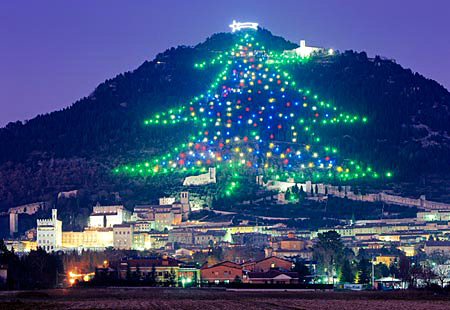 Unfortunately, the relation between the Fir tree and our Christian faith is little known today and with the years to come it will be less and less associated with Christianity.

Here are few interesting legends which I found explaining, some of the possible roots of the Christmas tree decoration:

1. Legend of the Pine Tree Saving the Holy Family

When the Holy family was pursued by Herod's soldiers, many plants offered to provide them with shelter.
One such plant was the Pine tree. With Mary too weary to travel any longer, the family stopped at the edge of a forest to rest.
A gnarled old Pine which had grown hollow with the years invited them to rest within its trunk.
Then, it closed its branches down upon them, keeping the family safe until the soldiers had passed.
Upon leaving, the Christ Child blessed the Pine and the imprint of his tiny hand was left forever in the tree's fruit… the Pine cone.
If a cone is cut lengthwise, the hand may still be seen. 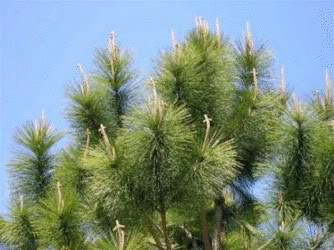 There is a legend that pine trees "know" when it's Easter.
The pine trees start their new growth in the weeks before Easter.
If you look at the tops of the pine trees two weeks before Easter you'll see the yellow shoots.
As the days get closer to Easter Sunday, the tallest shoot will branch off and form a cross.
By the time Easter Sunday comes around, you will see that most of the pine trees will have small yellow crosses on all of the tallest shoots.
This really happens we live where there are lots of pines,
and each year this actually happens, it is amazing to watch,
and the process of the new growth appears as crosses on the ends
of each branch.

I've not personally observed that, but according to people who live in pine tree forest areas this is a fact.

3. Legend about M. Luther and the Pine tree

Martin Luther, founder of the Protestant religion, was taking a stroll through the woods late one night.
The sky was clear and many stars were shining through the branches of the trees,
giving the impression of twinkling lights.
Luther was so captivated and inspired by the beautiful brilliance of the sight
that he cut down a small evergreen and brought it home.
He recreated the stars by placing candles upon the tree's branches to imitate
their radiance and presented it to his children.

This story explains why, the pine tree become so wide spread initially in the "western world", as it gives some connection between the Pine tree and Protestant Christianity.

4. The Children Legend of the Fir Tree (Kids Story)

On the night of the Christ Child's birth, all living creatures, both flora and fauna, traveled to Bethlehem bearing gifts.
The Olive tree, for example, brought its fruit and the Palm tree its dates.
But the little Fir tree had no gift and was so tired that it was unable to resist when the larger trees pushed it into the background and hid it from view.
But then, a nearby Angel took pity and commanded a cluster of stars to descend and rest upon its delicate boughs.
When the Baby Jesus beheld this lovely lighted tree, he smiled and blessed it,
declaring henceforth that Fir trees should always be filled with lights at
Christmastime to please little children.
When Christianity first came to Northern Europe, three personages representing
virtues were dispatched from Heaven to place lights on the original Christmas tree.
These personages were Faith, Hope and Charity.
Their search was long, since they were required to find a tree as high as hope, as great as love and as sweet as charity.
In addition, the tree had to bear the sign of the cross on every bough.
Their search finally ended in the forests of the North where they found the Fir.
Lit by the radiance of the stars, it became the first Christmas tree.
The triangular design of the Fir has also been usedto describe the Holy Trinity of God the Father, The Son and The Holy Spirit.
Eventually, converts began to revere the Fir as God's Tree…as they had once revered the Oak.
By the Twelfth Century it was being hung, upside-down, from ceilings at Christmastime
in Central Europe, as a symbol of Christianity.

A very old and delightful European custom centers around decorating a Fir tree with apples and small white wafers which represents the Holy Eucharist.
These wafers were later replaced by small pieces of pastry cut into the shapes of stars, angels, hearts, flowers and bells.
Eventually additional pastries were introduced bearing the shapes of men, birds, roosters and other animals.

During the middle Ages, around the Eleventh century, religious theater was born.
One of the most popular plays …
The German mystery play concerned Adam and Eve and their fall and expulsion from the Garden of Eden, represented by a Fir tree hung with apples.
This tree was symbolic of both the Tree of Life and the Tree of Discernment of Good and Evil, which stood in the center of Paradise.
The play ended with the prophecy of a coming Saviour. For this reason, it was often enacted during Advent.

The one piece of scenery, the "Paradeisbaum" or "Paradise Tree" become a popular object and was often set up in churches.
Eventually it also found its way in private homes and became symbol of the Saviour.
Since the tree was representative not only to Paradise and the fall of man, but also the premise of salvation.
It was hung not merely with apples, but with bread of wafers (Holy Eucharist) and often sweet to represent the sweetness of redemption.
In some areas of Bavaria, fir branches and little trees decorated with lights, apples and tinsel are still called "Paradeis".

According to some other Christian legends, it was a Fir tree that grew as the Tree of Life in the Garden of Eden.
When Eve plucked its fruit, the foliage and flowers shrank to nothing but needles.
Only on the night of Nativity would the Fir tree bloom again a moment marked perhaps by the Christmas tree we Christians use.

Of course these are just legends and as with every legend there is plenty of romantism included.
Nevertheless I consider most legends similar to proverbs contain deep truth and contain truthful facts. Moreover knowing the legends of our forefathers connect us to who and what we are and from antropological point of view is precious knowledge, we should try to sustain and spread to our children.