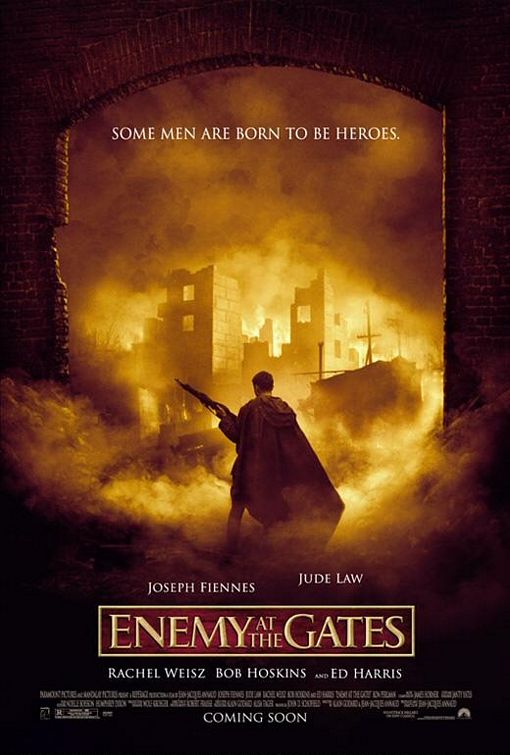 Yesterday I watched Enemy at the Gates movie. The movie is quite good I really enjoyed.
The story behind the movie is circling around the battle of Stalingrad in the Second World War.

The movie presents the harsh reality of the WWII, the Nazis city occupation and the Russian’s desperate attempts to save the city.
The movie was produced in 2001 and is directed by Jean-Jacques Annaud, starring Jude Law, Joseph Fiennes and Ed Harris.
The movie title comes after a book written in 1973 with the name Enemy at the Gates: Battle of Stalingrad which describes the events that happened in that dark times of human history.

The two key actors are the Soviet sniper Vasily (Vasilii) Grigoryevich Zaitsev and his German counterpart Major Erwin Konig.
The movie entwine’s the story of Zaitsev who used to a shepherd from the Ural Mountains and has become a soldier for the Red Army in attempt to save his motherland from the Nazis invasion.

In one of the film movies Vasily has remarkably killed a number of soldiers by stalking pretending to be dead among the heaps of dead Russians.
One other soldier by a lucky accident (Commisar Danilov) who also survives through the pogrom and watches the heroism of Vasilii Zaicev and as he is assigned in the Red Army publishing he writes a lot of Articles about Zaitsev’s heroism and quickly turns him into a National hero.
As Zaitsev becomes loved by Russian people and Germans recognize him as a obstacle to their invasion they send the Major Erwin Konig (a notable and honorable sniper to kill Zaitsev) and thus disrupt the Russian Army hero and hence morale.

Zaitsev and Danilov meets Tania (a beautiful young woman) serving for the red Army. They both fall in love the beautiful Tania.
It’s not a long time and Tania is also in love with Vasily.
As the movie progresses Tania and Vasily start a love affair. Tania is seriously injured in one of the further scenes and is sent with a boat to a nearby town hospital.
As General Konig kills a number of Zaitsev’s army fellows, and throughout the movie the battle between two becomes more and more personal.
As Tania is thought to be dead by Commisar Danilov and he cannot bear the loss because he is love with her, he sacrificies himself by showing up in a battle scene where General Konig and Vasily are staling at each other.
Danilov gets a head shot from Herr Konig’s rifle and thus the general prepares himself to get from his sniper hiding, thinking he has killed Vasily.
As he wents out of his hiding-place he sees Vasily waiting for him and Vasily shots him right in the head.

It’s been a while and the Russians had been victorious over the Germans and the Stalingrad battle is won. Zaitsev visits the hospital where Tania is being recovering from her serious injuries. The movie ends with the happy scene of Tania and Vasily being together again! Quite a Romance.

The movie’s main actors are not russians unfortunately but still I find the movie to be quite a good one and I recommend it for wathching to anybody willing to spend some good 2 hours time in watching the love drama.

Tags: Enemy at the Gates a film about the World War II movie review
Posted in Movie Reviews | No Comments »