Today, for its my 3rd time I go to Eindhoven. My first time was when I flied from Sofia, Bulgaria to Eindhoven (Holland) Airport in September, second time I was there was December 22-nd as I had to go there to take my girlfriend Svetlana from the airport; today it was the first time as unfortunately her Belarusian visa was expiring and she had to travel back to Belarus.

We travelled with Svetla from Arnhem to Eindhoven, the whole trip takes about approximate 1 hour. There is no direct train from Anrnhem to Eindhoven; thus we had to change train in 's-Hertogenbsoch. The trip thanks God went smoothly and the train was late with only few minutes (something very unusual for trains here in Holland). About 12 o'clock we were in the Train station. The bus station allowing a number of bus lines travelling to different destinations of the city is located right infront of train station, just like in Arnhem, Nijmegen (and probably a lot of other Dutch cities). Dutch architects did obviously a very good job by designing such a good road architecture in Holland, along with the ability to travel through absolutely all country on bike, the train and bus architecture is designed very well too. The bus to Airport is arriving and departing every 7 minutes, so there was no need we wait for long time for the next bus to arrive. I had to pick-up a bus tickets from a special bus tickets sell-office. The bus per person costs 3.50 EURO as of time of writing this post – something to mention is I have memorybus ticket in 22 december 2012 from train-station to Airport was 3 EUR – 50 cents less. Actually a curious fact to mention from 22 dec 2012 is I went to take the bus very early in the morning and bus-tickets office (located on the right of the entrance of Train Station entrance), were closed. I went to buy a bus ticket from the driver (a kind lady) and she told me their ticketing system is not working so "everybody is for free :)". This was quite a fun, since here in Holland they're so advanced and high-tech and they put most of their "lives" in the hands of technology and suddenly something as important as a bus-ticketing system is off and everyone in bus travels for free – absolutely ridiculous story …

My whole impression from Eindhoven is not very different from other cities I've seen in holland. The architecture of most of the streets and houses is no different. The brown beautiful houses build of little blocks with plenty of beautiful outside house decorations, green grass etc. There is however an evident difference from Arnhem and Nijmegen as many of the company buildings  near the city center and on the way while in the bus to Airport were built in a very modernistic style. Something noticable was buildings belonging to the so famous Philips company as well as the Philips stadium. Few of the buildings were quite tall looking a bit like New York's sky-scrapers. On the way to train-station, the most noticable thing I've seen was the Evulion – a modernistic building build in the shape of scifi movies UFO 🙂 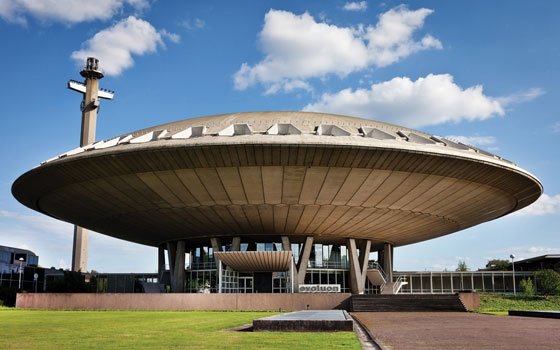 The rest was just a lot of company buildings and industrial equipment or markets, the whole city as long as I saw it is very technological and industrial. I derive this conclusion as  I've seen buildings of many of the most famous world IT companies, as well as a lot of industrial vehicles on the way to train station. After I had to leave my dear Svetlanka on airport. I've took the bus back to the train station. BTW, the bus number as of time of writting which goes from Train Station to Airport and Airport to Train-Station is bus number 401. The bus looks a bit more modern than the usual bus-es I've seen in Arnhem and Nijmegen. One thing which is different also from the regular bus-es in many other cities and towns in Holland is the driver in the bus going to and from Airport to tr. station, refuses to sell you tickets, but instead one has to buy the ticket from a ticket selling machine, which is accepting debit and credit cards, as well as probably the Dutch OV Chipcard as well as supports buying by coins. The ticket selling machine is made to work complicated, as there are few ticket types one can choose using a touch-screen computer interface; I tried inserting 3.50 euro to buy ticket for myself but the machine is just spitting the money. It is good a lady I asked on how she bought helped me showing me I first have to select the ticket type from the touch-screen as the touch screen is very much on the left side of the ticket-selling machine and I was in a hurry I didn't even noticed it. I've seen other people having the same problem with the machine, wondering why it happens – so it might be a good idea the high-tech guys who constructed it to make ticket buying using a 3 or 5 simple buttons, through which one can select the ticket type. It will save people time as well as not confuse probably multitude of foreigners like me who came to holland and get a first impression that Holland's sophisticated IT structure is not working 🙂

After Svetka check-in her laggage in around 12:40 and we had to say each other good buy in 13:10, she went inside the usual Airport Security check – metal detector scanner and I took the bus back to Eindhoven train-station. As the train station is located 3 minutes walk from the city center. I decided to take a quick look in the city center to see if there is something nice to see on centre – I was more interested to take a look at some Churches and my main idea was to see if I can find the Orthodox Church Parish of Saint Nectarios of Aegina as well as take a look at the Gothic style built Roman Catholic or Protestant Church buildings. About 10-15 minutes walk from train-station I've noticed two huge cathedrals. Both of them was heavily decorated with towers with the usual 3 enormous windows repeating pattern and the many other architectural patterns containing 3 elements (probably symbolizing) the Holy Trinity. What was new for me on both of the Cathedrals is the of Virgin Mary and Jesus or Saints? statues located on top of the Gothic Cathedrals. I checked the time schedule and it seemed both of cathedrals were functional, but only the second one I went to (St. Catherine) was opened. 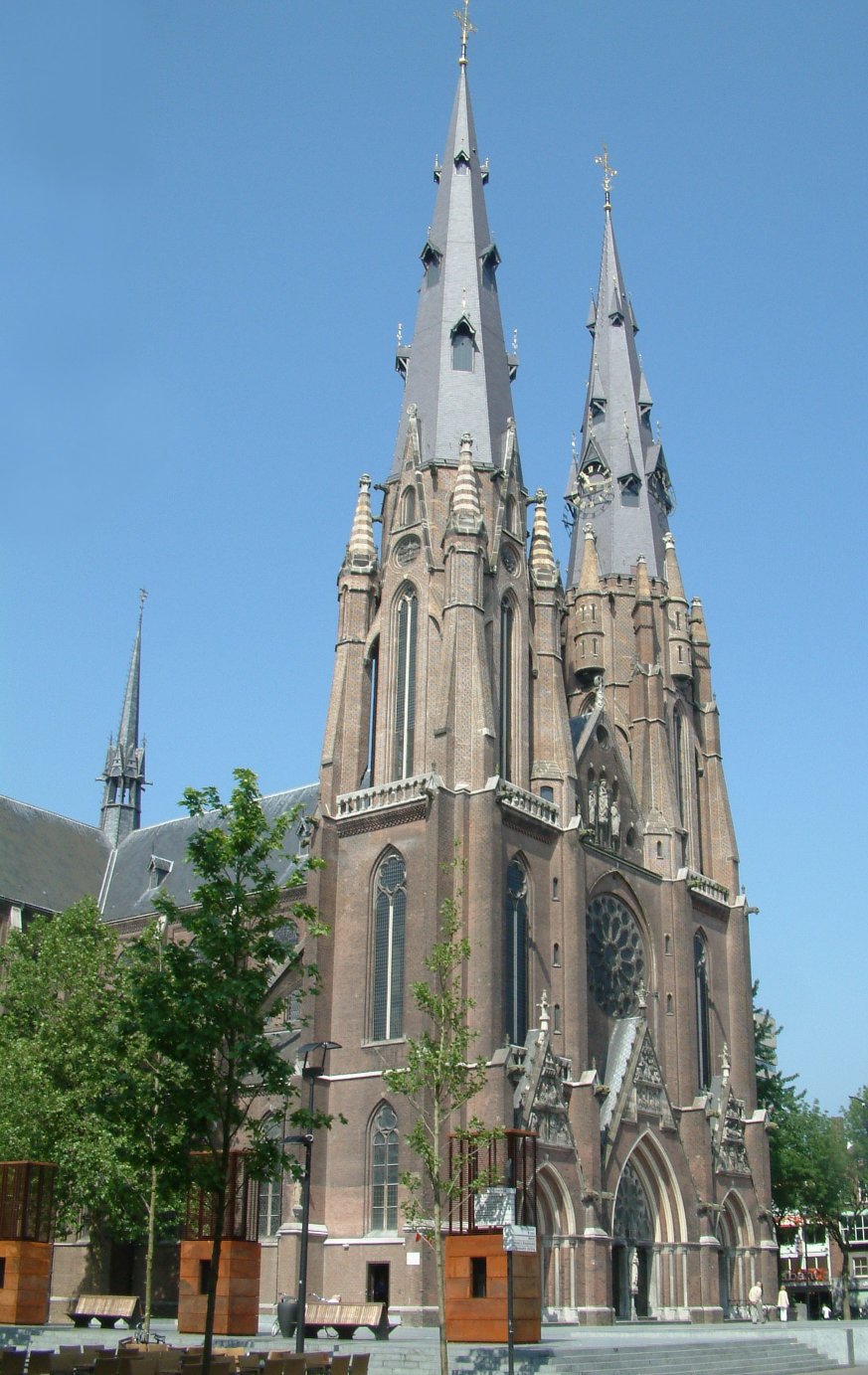 I've red the short history of the Cathedral and walked around it to check the wall paintings, statues, roman catholic crucifixes, the mosaics on the Church windows and generally the Church decoration. Many of the things in the Church seemed very unusual to me. The thing I most disliked was the ugly modern art reproductions mosaics of Jesus and various evangelica scenes. Though I'm happy I could have entered a Christian Church, I couldn't have not say how grotesque the crucifix means. There was a separate room in where it seemed people from the Church was doing something it looked a bit like an office. Though this was a still Church, for me it was somehow missing the light and feeling of spiritual deepness. There was an icon of Virgin Mary holding the most pure body of our Saviour Jesus Christ. One can clearly distinguish it is a Slavonic icon by the "ÐœÐ  ÐžÐ£" – abbreviation for Marry Mother of God.
I've red the Church story and it seems the earliest Church there is from the 12th century – meaning that it is possible an Orthodox Holy Liturgy was never served there.
A very short story of the Church is very similar to many of the Roman Catholic Cathedrals in Holland;

In short, Church building was taken from Roman Catholics and used by protestant in 16th / 17th century, just like with many other of the Roman Catholic Churches during the 16th – 18th century protestant reformation. In 19th century Catholics used it again, but then in 20th century it was almost completely destroyed during World War II, later rebuild and now again owned by Roman Catholics.

One thing to mention is though, I've only been in few Roman Catholic Cathedrals so far, it seems almost every one was keeping an Orthodox icon (usually Russian one), or an icon at least looking like Orthodox. Usually I would not be interested into entering a Roman Catholic Church, as we are prohibited to pray with them and I know about their errs in faith, however I know many of the Churches contain Holy Relics of saints / martyrs and bishops who preached and lived an extremely holy life, before the great schism thus I walk in Roman Catholic Churches with the hope and desire that the Church might contain Holy Relics of saint in their alter or somewhere kept and through that I might a blessing of the respective saint ….

After, walking out, I've walked through the city center, and most I saw was modernistic buildings shops and just few houses with more interesting oldish architecture. Some interesting building on city center is an Iglu shaped like called "Iglus". 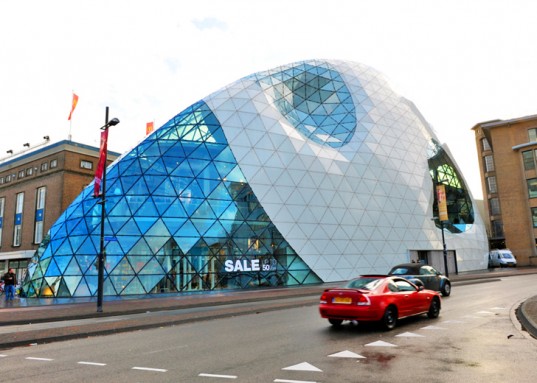 I didn't saw all of the city center but from what I've seen it seemed to me the city center of Eindhoven is less interesting to see than Arnhem and Nijmegen's. Eindhoven's city center looks modern and maybe this was main thing why I was not impressed. 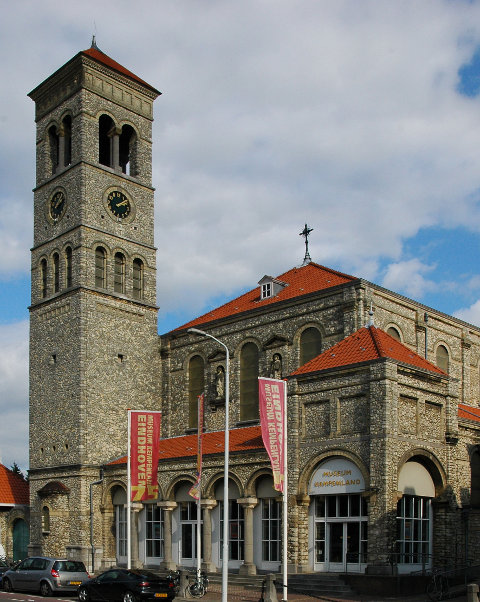 I've seen one Church building, while traveling with the bus from Eindhoven Airport to Train-Station, and this building looked very much like Orthodox, also from the far the cross of it and the overall architecture looked very much Orthodox. I very much hoped it is an Orthodox so from Train Station walked about 20 minutes to the Church to check if it is not the Nectarios of AeginaOrthodox Church I mentioned earlier. The Steentjeskerk  Church was closed and on the main entrance doors. I've later found out the Church is not used for Roman Catholic Holy Liturgy since 1971.

It was quite striking to see shops selling souvenirs or something on the exact place where the Church entrance door used to be;  just 15 meters from the Church was a Coffee-Shop (i.e. a place here in Holland, where people go to Smoke Ganja, Mushrooms, alcohol and other light drugs ….

After checking on the Internet for the Steentjeskerk building is relatively new and had nothing to do ever with Orthodoxy. What however made me happy is it used to be dedicated to st. Anthony the Great – the saint who is considered as a father of Christian monks life.
The scenery right in front of my eyes was striking, I made a walk through the Church to see well its Architecture and in hope I can understand if it used to be Protestant or Roman Catholic. According to the Virgin Mary statue on top of Church I derived conclusion the Church used to be Roman Catholic. i've seen some text written somewhere on the back of the Church speaking the Church is used for some kind of exhibition. Even though the Church was not Orthodox, I felt sad for the poor Church being abandoned and being almost pranked with by allowing a place which was used for regular prayer to shop / exhibition …..

On the back of the Majestic Church, My amazement doubled when I saw a big mosque with a high Minaret (space ship rocket – as a friend likes to joke). The working Muslim Mosque built according to architecture norms of Muslims on the backstage of the unworking poort closed Roman Catholic Church turned to shop / exhibition was one of the saddest things I've seen. This whole scenery also explained, why Muslim faith is blooming and Europe it also explains, why Muslims are currently "taking over" Europe – just until recently the largest Christian continent.