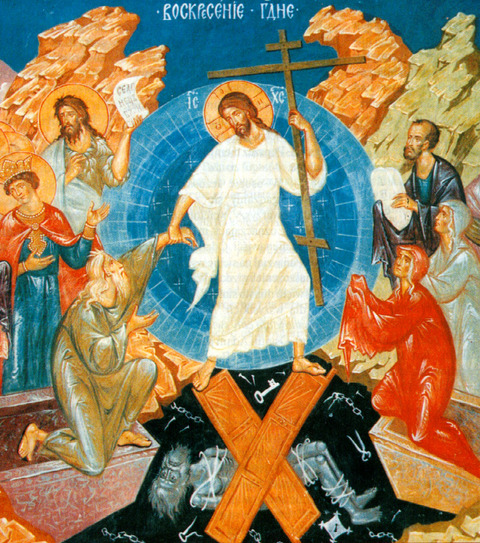 It is the first week after Orthodox Christian Easter. This year 2012, the Orthodox Christians Easter date was on fifteen of April.
We've not just had a feast of an Eastern, but we actually celebrated the greatest day in all human history that happened 2012 years ago – The Glories Resurrection of our Lord Jesus Christ from the Death in the Third day!

Some Roman Catholic Christians, might be wondering, why the Orthodox Church is celebrating one week after Jewish Pascha, so in short I will explain in the reason.We orthodox christians do not celebrate with Roman Catholics Easter because Roman Catholics use the gregorian calendar to calculate and decided the day in which the Eastern celebrations should occur, where we the Orthodox Christians use still the old moon calendar (which the jews used too), when Jesus was crucified.
The gregorian calendar is very precise from a scientific point of view, however from a Church stand point it is completely wrong because, plainly taking the gregorian calendar math model doesn't take in consideration, that the jews are still celebrating their pascha following the old moon calendar.

The consequence is this year Roman Catholics, celebrated with Jewish. This from our Orthodox Christian point of view is incorrect, because Christ's Cross suffering is the pascha for us christians.
We Christians consider that the old God ordained jewish pascha was a prophecy feast, simply to remind jewish people before Christ's coming that Messiah (Christ) will come to say his people.
As Jewish rejected their true Messiah and Crucified him on the Cross, they have rejected to accept Christ as being the true pascha lamb slained for our sins.

Hence the Orthodox Christian Church teaches even to this day, that it is not righteous to celebrate Christ's Glorious Resurrection with Jewish Pascha.
Prohibition to celebrate Easter and Jewish Pascha on the same day is an Orthodox Church rule, since the early church days.
The Holy Fathers in their Church councils Council of Nicaea etc. has established as unchangable Church rule that, Jesus's Resurrection day feath, should never-ever coincide with the Jewish Pascha Celebrations.

The reasons the Church fathers ordered the Church Easter day to be always 1 week after Jewish Pascha is our saviour Jesus Christ ate pascha with his desciples as we can read in the 4 gospels in Holy Bible. After Jesus ate pascha, he was caught mocked, tortured and crucified (killed on a cross shaped trees).

Jesus is Risen! Truly He is Risen!

The Slavonic Paschal Greeting, translated words, we use across the Slavonic dome: ( Bulgaria / Russia / Ukraine, Serbia) is:

According to our Church Tradition, Christians should great each other with the Paschal greeting Hristos Voskrese during the whole "bright week" instead of the usual Hi / Hello phrase.

One great miracle that testifies about the Christ's resurrection each and every year happens on each Orthodox Christian Eastern in Jerusalem in the Temple of Holy Sepulchre (where the saviour's grave cave, before the resurrection used to be). Last year, I've written to great all Christians for the Resurrection with the joyful Paschal Greeting Jesus is Risen and the Miracle of the Holy Fire
Pitily, the number of Roman Catholics who heard or know about this amazing miracle are mostly within the clergy. Its very rare a layman Christian in Roman Catholic realm heard of the miracle. Once again as a closure I want to great everyone with the joyful paschal greeting in the manners of Russians which say it three times during the paschal period.