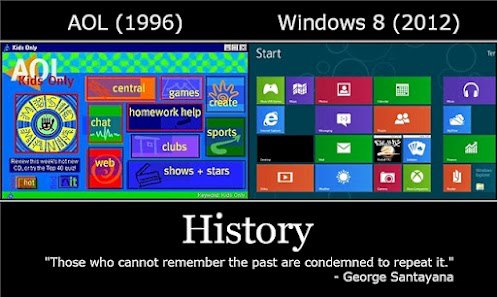 Do you remember the old days, when AOL (America on Line) was part of Windows 95 / 98 progam components / menus? Most brand new Windows 95 and Win 98 installations had AOL by default. Though AOL was standard internet ISP in America, I think they never took the lead in Europe in my home country it was impossible to use AOL, so Win installs back in the day just had desktop shortcut which had to be deleted. However in America AOL was well known company providing Internet access via dial up in the yearly days of Internet years 1995 – 2000.  In above picture you see screenshot of the order of buttons, design and coloring of AOL Windows 95 / 98 application compared compared to modern (Mobile) Windows powered 8 / Windows phones, the likeness is striking! Doesn't seem too much like incident or innovative design, does it? 🙂 The difference between 1995 and now in functionality is not significant too the main difference is in 95 the Net was slow, there are some improved graphics and mobility which is so common today, the res is just redesign and re-inventing the steel. Probably if one takes the time to compare other old computer interfaces with newer one find many similarities. This is also true for Macintosh / Apple products.
Big thanks to my dear friend Nomen for handing me in the pic 🙂