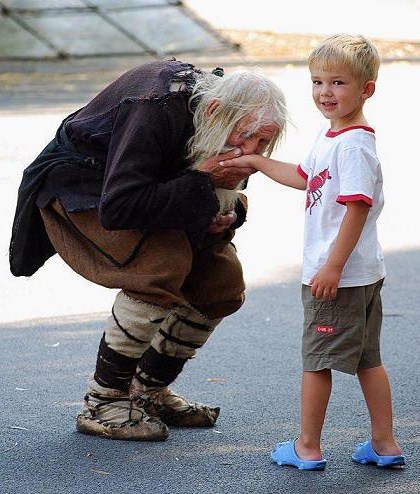 In this dark days of humanity, we can rarely find persons who live in a holy way like the saints from the Holy Bible or the Books of the Living of the Saints

Saintship has been slowly disappearing from earth just like it's prophecised by Christ our Saviour and the Holy Apostles and in later times by many monks, Church hierarchs, patriarchs and hermits.

In Bulgaria as in most parts of the Orthodox world the Christian faith apostacy is also clearly seen.
We can no longer see saint hermits like our patron saint of Bulgaria Saint John of Rila

Even in this dark days God still shows mercy to us and still present us some of his saints.
The topic of this article as you have already red in the title is Elder Dobri of the Baylovo village

Elder Dobri of Baylova has been a regular person like all of us with a family and children just until 12 years ago.
About 12 years ago the I would call him The Living saint has decided to let all the earthly passions and sorrows for Christ and his eternal salvation.
He despised the earthly goodness and become a beggar, all the collected money he got were distributed among other poor people or donated to Churches and monasteries belonging to the Bulgarian Orthodox Church.

Day by day and a coin by coin, he has collected thousands of levs (the bulgaria national currency).
The gathered money were given to support the live of monasteries and Churches, by this very date. This old man is the greatest donator for the Cathedral Church St. Alexsander Nevski (situated at the heart of Bulgaria's capital Sofia)

His words spoken just like the saints are full of grace and goodness. One of his famous sayings are:

Man has Always two wills in himself in every moment of his life, the will to do good and the will to do evil
As all the truths his sayings are simple but represent the ultimate truth which was also said in many other forms in The Holy Bible Gospels and God's law.

The external outlook of Dqdo Dobri is also saintly, he has long beard a shining eyes and a national folklore dress.
He looks like he has been out of some old Bulgarian tale.

It's very striking fact that he that this old man is the biggest donator for our Cathedral Temple, we have many millionaires and businessman in Bulgaria but nobody has decided to donate to our Church such a high sum of money.

Elder Dobri's donation for the St. Alexander Nevski's Church is in value 35700 levs (around 19000 euros).
Dqdo Dobri is a beggar for Christ, this is one of the major types of saintship we read about in the living of the saints.
All the collected money from people are given for God's Glory. It's amazing heroism and an example, all we the Christians should follow to fulfill Christ's law of love and inherit the internal salvation.
A friend of mine who has the blessing to see Elder Dobri with her own eyes and have a small talk with him, has shared with me that even though he wears an old ragged clothes, his clothes and body emit a roses like odor!

As the fame about the same has grown these days, the Bulgarian National television has prepared a small video about the saint. I believe the video as a true blessing for us the Christians and will encourage us to persist in the good deads.
Here I present you the videos you can see the living saint, I hope by his holy prayers God will show mercy to all us who watch his graceful words: