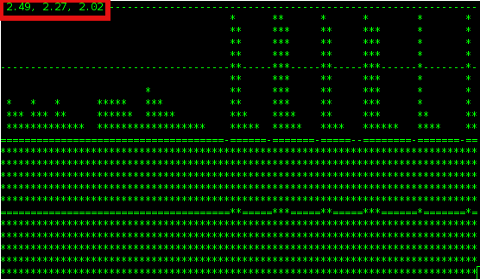 There is probably no Linux system administrator who, don't have idea about system  Load Avarage. Most of admins however does have some brought idea about what kind of load avarage is critical but doesn't have good understanding on the 3 digits returned as a load avarage i.e. – load average: 2.47, 2.27, 2.02 shown in above ascii graphs ( generated by tload command).

What is Load Avarage ?

Thus logically the higher the Load Avarage, the more processes has to wait for access to CPU, HDD and Network I/O.

The most two common commands used where load avarage appear are;


Other common place to check load avarage is in top cmd: 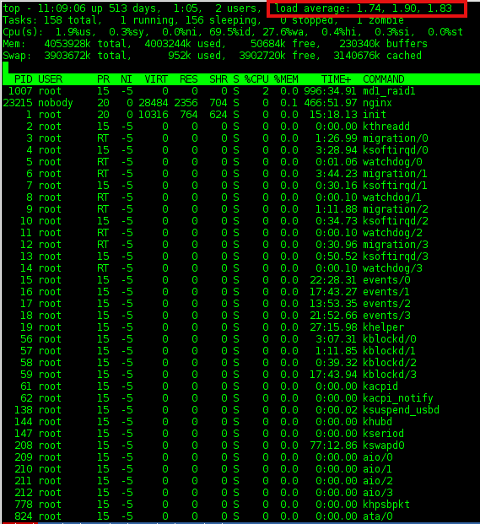 a) Optimum machine use – Load Avarage 1

Hence rule to calculate normal load avarage for server is;

1 Load Avarage per CPU. Therefore for 24 CPU Intel Xeon hardware. Load Avarage under 1*24.00 = 24.00 is considered normal. On such a server whether load avarage jumps to 50.00 / 70.00 or above server becomes totally irresponsive and it is very likely to hang because of over-heating. Even if it continues working it will work extremely slow and even simply operations like ssh to it will become hardly possible and sometimes even access via ssh will be not possible.

ThereforeRule of Thumb for calculating which load avarage is okay for a server is;

All are important however 5 and 15 minutes load avg. give better indication on what's happening with machine as current load can peak for just a second to a higher number, being misleading.

To get number of CPU / Cores use cmd;

For more precise info on CPU type and model use;

Look in STAT column. Processes in STAT have 3 states;

Usually processes with status of D – are ones causing problems. If you get D STAT-ed processes check further what's wrong with them and fix it. If there are none,  simply, number of clients using machine pop-ed up meaning you need to quickly move to better hardware host.

A good way to get notified or do certain action like restarting Apache WebServer or other common process causing high loads is through monit. Monit is very usefukl for notifying on high load avarages or even better for Restarting processes imposing high loads.

You can always use a few liners shell script to mail to email or SMS2Email mailbox similar to this tiny shell script to restart apache on high load.There is also a Ruby lang tool – Scout to monitor and report high load avarages

Convert WAV to MP3 in command line with LAME on Linux

Reading Time: < 1minute
I needed to convert a bunch of files from WAV to MP3 format on my Linux desktop.

And then I issued the small one liner script to convert the .wav files to .mp3 using the niftly lame linux mp3 convertor.

After executing the little script you might go and have a coffee, if you have thousands of files, each file convertion takes about 10-15 seconds of time (speed depends on your CPU).

Here is some output from a lame convertion to mp3 taking place:

Actually there are plenty of other ways to convert wav to mp3 on Linux through mplayer, ffmpeg even with mpg123.

There are also some GUI programs that could do the convertion like winff , however for some weird reason after installing WinFF on my debian it was not able to complete convertion to mp3?!
But it doesn’t matter, the good news is I did what I wanted to via the simple lame program and the above script, hope it helps somebody out there.