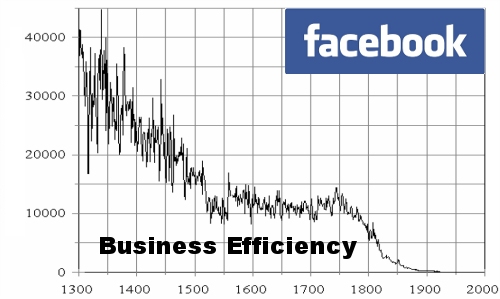 I don't know if someone has thought about this topic but in my view Facebook use in organizations has a negative influence on companies overall efficiency!
Think for a while, facebook's website is one of the largest Internet based "people stealing time machine" so to say. I mean most people use facebook for pretty much useless stuff on daily basis (doesn't they ??). The whole original idea of facebook was to be a lay off site for college people with a lot of time to spend on nothing.
Yes it is true some companies use facebook succesfully for their advertising purposes and sperading the awareness of a company brand or product name but it is also true that many companies administration jobs like secretaries, accountants even probably CEOs loose a great time in facebook useless games and picture viewing etcetera.

Even government administration job positioned people who have access to the internet access facebook often from their work place. Not to mention, the mobility of people nowdays doesn't even require facebook to be accessed from a desktop PC. Many people employeed within companies, who does not have to work in front of a computer screen has already modern mobile "smart phones" as the business people incorrectly call this mini computer devices which allows them to browse the NET including facebook.

Sadly Microsoft (.NET) programmers and many of the programmers on various system platforms developers, software beta testers and sys admins are starting to adopt this "facebook loose your time for nothing culture". Many of my friends actively use the Facebook, (probably) because they're feeling lonely in front of the computer screen and they want to have interaction with someone.

Anyways, the effect of this constant fb use and aline social networks is clear. If in the company the employeed personal has to do work on the computer or behind any Internet plugged device, a big time of the use of the device is being 'invested' in facebook to kill some time instead of investing the same time for innovation within the company or doing the assigned tasks in the best possible way

Even those who use facebook occasionally from their work place (by occasionally I mean when they don't have any work to do on the work place), they are constantly distracted (focus on work stealed) by the hanging opened browser window and respectively, when it comes to do some kind of work their work efficiency drops severely.
You might wonder how do I know that facebook opened browser tab would have bad interaction with the rest of the employee work. Well let me explain. Its a well known scientifically proven fact that the human mind is not designed to do simultaneously multiple tasks (we're not computers, though even computers doesn't work perfect when simultaneous tasks are at hand.).
Therefore using facebook in parallel with their daily job most people nowdays try to "multi task" their job and hence this reflects in poor work productivity per employee. The chain result cause of the worsened productivity per employee is therefore seen in the end of the fiscal quarter or fiscal year in bad productivity levels, bad or worsened quality of product and hence to poor financial fiscal results.

I've worked before some time for company whose CEO has realized that the use of certain Internet resources like facebook, gmail and yahoo mail – hurts the employee work productivity and therefore the executive directors asked me to filter out facebook, GMAIL and mail.yahoo as well as few other website which consumed a big portion of the employees time …
Well apparantly this CEO was smart and realized the harm this internet based resources done to his business. Nowdays however many company head executives did not realize the bad effect of the heavy use of public internet services on their work force and never ask the system administrator to filter out this "employees efficiency thefts".

I hope this article, will be eventually red by some middle or small sized company with deteriorating efficiency and this will motivate some companies to introduce an anti-facebook and gmail use policy to boost up the company performance.

As one can imagine, if you sum up all the harm all around the world to companies facebook imposed by simply exposing the employees to do facebooking and not their work, this definitely worsenes the even severe economic crisis raging around …
The topic of how facebook use destroyes many businesses is quite huge and actually probably I'm missing a lot of hardmful aspects to business that can be imposed by just a simple "innocent facebook use", so I will be glad to hear from people in comments, if someone at all benefits of facebook use in an company office (I seriously doubt there is even one).

Suppose you are a company that does big portion of their job behind a computer screen over the internet via a Software as a Service internet based service, suppose you have a project deadline you have to match. The project deadline is way more likely to be matched if you filter out facebook.
Disabling access to facebook of employees and adding company policy to prohibit social network use and rules & regulations prohibiting time consuming internet spaces should produce good productivity results for company lightly.
Though still the employees can find a way to access their out of the job favourite internet services it will be way harder.
If the employee work progress is monitored by installed cameras, there won't be much people to want to cheat and use Facebook, Gmail or any other service prohibited by the company internal codex

Though this are a draconian measures, my personal view is that its better for a company to have such a policy, instead of pay to their emloyees to browser facebook….

I'm not aware what is the situation within many of the companies nowdays and how many of them prohibit the fb, hyves, google plus and the other kind of "anti-social" networks.
But I truly hope more and more organizations chairman / company management will comprehend the damages facebook makes to their business and will issue a new policy to prohibit the use of facebook and the other alike shitty services.

In the mean time for those running an organization routing its traffic through a GNU / Linux powered router and who'd like to prohibit the facebook use to increase the company employees efficiency use this few lines of bash code + iptables:

If the script logic is followed I guess facebook can be disabled on other company networks easily if the router is using CISCO, BSD etc.
I will be happy to hear if someone did a research on how much a company efficiency is increased whether in the company office facebook gets filtered out. My guess is that efficiency will increase at least with 30% as a result of prohibition of just facebook.

Please drop me a comment if you have an argument against or for my thesis.