I needed to use another computer (IPad 2)to add one guy as a future business contact. I was suprised by a message which you see in the screenshot. 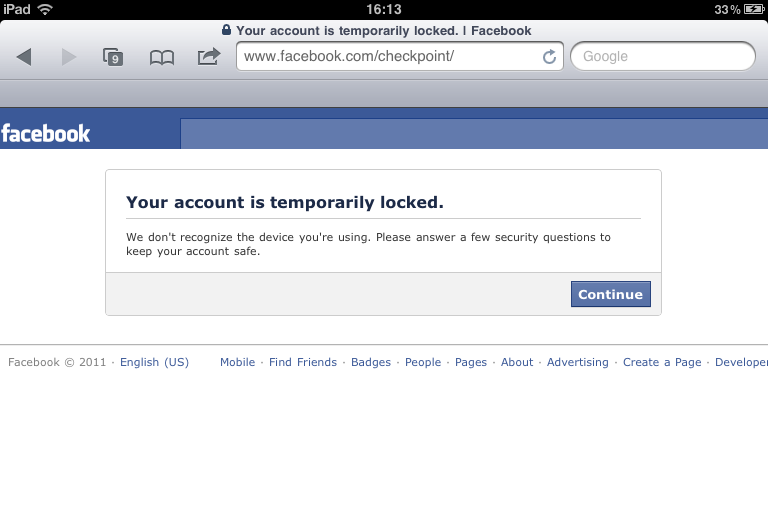 obviously Facebook are becoming more and more impudent, so now apart from tracking all my activity in facebook and having the copyright rights over all my pictures uploaded, they now want to bind me to use their shitty service only from a single computer.

“We don’t recognize the device you’re using.” is scary to me personally and it shows a very bad direction, we have taken.
Now its supposed that any normal member of society is using his personal personal computer equipment (notebook, desktop, mobile tablet etc.), where the direction is that unification of devices is happening with development of handheld devices, so suddenly, we might soon be forced to only use only one personal device for all kind of activities phone calls, entertainment, checking online … etc. you name it
Then imagine, we might little by little be forced by mass adoption to only use this devices for all kind of communication.
Let me explain a bit thoroughflly what I mean. With the invention of the radio, people part of modern society has little by little started adopting the TVs as a device to retrieve information from various types from a centralized sources.

A time came, where everybody in the developed countries were using the radio, then came the TV and the television as a mass media, people who previously used the radio has comparatively quickly migrated to TVs and little by little, the radios use from the masses died.
Then came the more advanced kind of technologies the computers, first they were used by only choosen “elite” people who were beneficial to live in the developed society where first mainframe computers were invented, the technology was advanced and when the personal computers went out, the decrease of computer price allowed practically almost everyone from the developing or the development world to buy and start using it.
The increased use of computers and the emerge of Internet in the end of ’80s has suddenly shifted the mass use of TV to computer use.
People were crazy about computers, now most of the young and mid aged people from developed societies has almost completely abandoned the TV as a mean to get informed as the computer is doing the same. The emerge of pagers and mobile phones little by little and the development of the mobile phones has lead many people who actively was using a PC to switch to use of mobile or handheld devices and therefore forget compeltely about old desktop computers. These days even laptops use is getting threatened by tables like IPAD or Samsung’s Android tabloid. The trend therefore is that people who actively use their computers switch to tabloids and mobile phones in the next 10 years at worst.
It’s more and more rarely now that people use a random computer device to access the internet or in there daily lives this creates a very severe possible short-coming future issue as its possible we reach the time that most services available online might only be accessible via only certain devices which has “a hardware” (hard or unchangeble way to identify us).
This might sound a bit like a scenario for a sci-fi movie but unfortunately I see it as one very possible scenario.
If the idea of online provided resources and services social networks like twitter,facebook, xing etc. is originally to provide easy access to piece of information from anywhere in the world they shouldn’t definitely try to restrict us on how we use their services (especially if this is not illegal or in contradtion in country’s law. 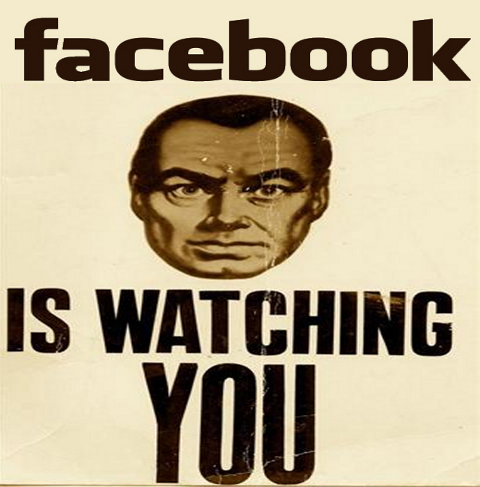 I really feel my privacy violated by facebook and I’ll probably delete my account there or always access it via a proxy further, I don’t like the idea that facebook is able to detect based on my IP change from country to country, the cookie shit it stores int he browser and browser and OS version of my computer what exactly is my computer and that I’m the only one to use this computer. What would it be if I was in a poorer country where the computer is used by many people, or I have borrowed my sister to travel abroad and use my notebook to access the internet and surrounding daily services she uses.
She might for example used the desktop at home and when travelling outside with my notebook access facebook, its a perfectly possible scenario. I don’t like the idea that I’m currently associated with a single computer really this is too much.The idea of linking my credentials for a shitty website like facebook to my personality is something I really don’t think is right.
If the Cloud Computing and online services should continue, there at least should be a government law to enforce, monopolists in online services to encrypt the user data in order to prevent, some facebook sysadmin or programmer or even the facebook Management board or CEO to have immediate access to privat information one puts in.

Same goes also for google, yahoo msn etc. Having an email account at any of the services and searching online reveals a lot of sensitive personal data, i’m quite sure that google/msn’s information stored for all the mail user accounts using the search engine services contains very sensitive information about a person’s personal private life and likings.
I’m quite sure google and the most of the big elephant companies are spying on their users and do create a thorough personal records for their users.

All this induces a serious threat especially with the increase of unification of local countries and country adhering societies as a direct cause of globalization.The globalization also leads to unification and merging of laws in countries around the world. The result from all this is also absollute necesity of internationalion of banking and financing system which is currently happening in front of our eyes.
They say it’s security measure but is it reall, just imagine if Gail, Yahoo or any otherBut let’s be optimistic, maybe I’m over-exaggerating, maybe things will go for good in short future and the “Doom scenario” will not happen 😉