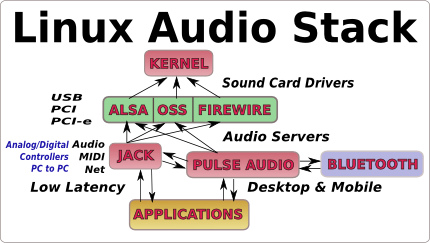 If you have recently migrated to Free Software Operating System Fedora,  Ubuntu or Debian GNU / Linux, OpenSuSE with GNOME / Mate / KDE / Xfce graphical environment, you might encounter that sometimes when using your computer for Multimedia the audio sound produced and streamed to the Sound Card is very low, so low that it prevents you from comprehending what the video, music etc. played says or you have to strain hardly your ears to hear what is to be said.

Let me illustrate what I mean, say  you watch an educational video  within Firefox / Opera (browser) in Youtube or listen some songs playlist in Vimeo.COM and the Sound on the follow up video suddenly becomes so low that you can't understand what the Coach or Instructor on the video is saying, or it could be a low sound within a Video downloaded on the PC and watched with Mplayer or VLC (Movie Players),
or lets say you listen MP3 / MP4 / OGG Song, S3M with mpg123 (in console) or with Qmmp (a graphical mp3 Windows WinAmp like player for Linux similar to good old XMMS Player).

So what is to be done to increase the audio volume from your Linux powered Notebook over 100% ??

I assume you already tried everything possible such as using aumix (Console / Terminal based tool) to boost your Sound Output to maximum and you also checked Gnome Alsa Mixerto make sure the Volume status is set to maximum but nothing helped as the sound produced is way lower behind you wish too.

By the using alsamixer command might help sometimes to increase the Linux sound volume a little bit but still you can't boost over 100% with it. 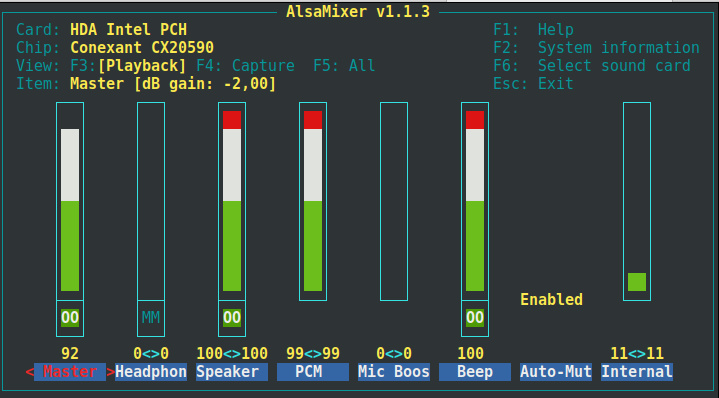 Apple Mac OS X users have surely experienced similar issues and are probably aware of the existence of a Trial (paid) application Boom 2 – A Mac OS Sound Volume Booster with Advanced Audio Equalizers and Effects but is there some similar Sound Increaseing software over the standard maximum 100% Volume for Linux?

Well yes, there is its called PavuControl (PulseAudio Volume Control)

To run it run pavucontrol from terminal program: 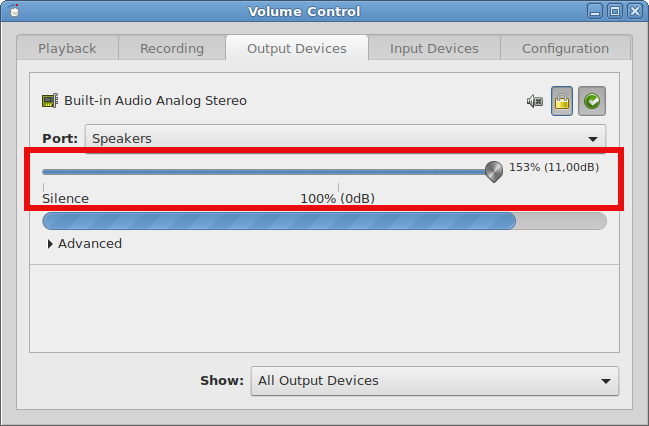 If pavucontrol command is not present on your Linux install it with apt as usual:

Note that PavuControl is using PulseAudio Linux Sound Streaming server to boost the Audio and not the ALSA (Advanced Linux Sound Server – which receives sounds from various applications and paralyzes them in different sound channels).

If you want to prevent the Volume Boost audio increase over 100% to lets say either the 150% percentages, the maximum pavucontrol gives you can do that by including the /usr/bin/pactl command (which is a part of pulseaudio-utils package) to /etc/rc.local (be sure you include the command in rc.local before exit 0 command)

To give it a test you can manually run from terminal:

You will notice the audio output sound increased immediately Note that the Sound boosting in Linux can be done over 150% to lets say 200% or 250 out of the normal maximum, and you can test 200% if you have a nice big speakers connected to your Computer to piss off your wife :), e.g. run:

# !!!!!!! RUN BELOW COMMAND AT YOUR OWN RISK AS THIS MIGHT DAMAGE YOUR COMPUTER OR EXTERNAL SOUND SPEAKERS !!!!!!