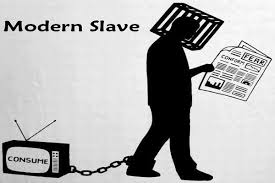 I'm still heavily researching on Mind Control Applications as well as how the our brains could be intentionally mislead to do not our will.
I myself am not watching TV for years now and I know pretty well the TV programs are one big non-sense. Loosing interest into television came natural for me as sometime in my development in life I found I can use computer to gather a data of my preference. As computers and internet gave me more control over choice what I want to learn I quit watching TV completely. However now I'm starting to realize even though I haven't watched TV for a long time the fact that I have watched plenty of Television as a child has unintentionally influenced me as a purpose.

The real way how television influence us and makes us prone to suggestability is through putting the watched in a state similar to a hypnosis. I personally don't believe in the hypnosis as it is an occult practice and I think Christians are not suspectable to be influenced in the same way as non-Christians as it is up to God to decide how a certain technology will influence the individual. However most of us people nowdays are not a regular church attendants and we don't regularly pray and ask God for mercies and blessings therefore this makes us away from God and makes us more vulnerable to satanic agendas like hypnotism to be able to have influence on us….
Also by TV and modern pop culture, we have been encouraged to not stick to our cultural roots but to separate ourselves and accept an empty non-sense ideology that doesn't have any core besides money and consumerims.
In that sense the TV and medias plays the most significant role nowdays.

The internet as lately we're hearing about PIPA, SOPA and all kind of legislations regulations corrupted 0politicians try to vote for could be soon filtered too. If that happens the situation with using computers to inform ourselves will be not so much different than with TV's and other medias.
Anyways even today the internet is heavily regulated as the biggest newspapers like New Your Times, BBC, Guardian are only publishing materials approved by the directors and compatible with the companies owners agendas…

Anyways we are not helpless as we can educate people and show them the real face of the things, so they can finally realize that this whole deception and anti-religious propaganda on the TV and vows for a life without rules is the greatest deception of our age.

WIth TVs, radios, music, Mobiles, Ipads, IPhones or nomatter what kind of latest technology we can never be happy while living without God.

Another good video worhty to see I've found on youtube is called
TV = Mind Control, unfortunately the video is not emebeddable so to see it you would have to copy paste this link: http://youtu.be/Nq9Gg7A-YEE