It is a a kind of Church tradition here in Netherlands after the end of Church service people gather together in the small Kitchen room located in Church and Eat together and have a chat (a post communion). This supper is something that is not well known in most "native traitional" orthodox Countries like in our Church in Bulgaria as well as in most if not all Russian and Belarusian Churches. This eating together with brothers and sister from Church is something great that I believe most if not all city Orthodox Churches must practice in some form. It a good way to share the love and joy of Christ's resurrection after Church service completes.
Thus if you're in situation like me, where you're trying to be a devoted Orthodox Christian living in Arnhem Netherlands and you're looking for a way to attend Church services every week Sunday or Saturday, one of your "cheap" options is to just go regularly from Arnhem to Nijmegen (only 40 km away from Anrhem). The most cheap way is to travel by train. Two way ticket from Arnhem to Nijmegen (Retuur Ticket as called in Dutch) costs as of time of writing (8.10 EURO) which for living standard in Netherlands is not so high price. There is also transportation by bus to Nijmegen, but as long as I know bus ticket costs a bit more so probably if you're trying to travel cheap, train is better.

It is amazing too see that here in Holland, there are native Dutch (wow!  🙂 ) who somehow by God's great providence managed to find true Christ Church – the Orthodox Church  in this whole great (faith) confusion of the days.. This is really a miracle, really !
Some of Dutch people attending the Church services are very dedicated, they even can speak some Russian / Serbian or Macedonian. Within both Churches brothers and sisters one can find very interesting people from all spheres of life. As I'm involved in IT, I could meet and speak few person from Russian Orhodox Church who just like myself are involved in IT jobs. Even more curiously one of those IT persons (a Bulgarian and a Programmer) is responsible for selling candles and orthodox books and in the Russian Orthodox Church 🙂

It is rather interesting for me as Bulgarian Orthodox Christian to see how same Holy Liturgy as our Bulgarian Holy Liturgy is served in Church Slavonic by our brotherly nations Russians and Serbs.

It is interesting that the Church service is almost 100% comprehendable and contains the same prayers and order just like in our Bulgarian Orthodox Church – well this is normal since we're Orthodox, but still seeing it with your own eyes and experiencing some other nation Holy Liturgy is an experience to remember.

Each of the Russian and Serbian Church has their local tradition uniqueness too and though the Holy Liturgy and For "rememembrance of the dead" service is equal all along all Orthodox Christian local Churches there are little specifics in both Russian and Serbian Church which make the services even deeper and gives me better understanding of our Orthodox Christian faith.
As Serbs are very near to Bulgaria and just like us Bulgarian Orthodox, they're serving and singing and serving in the Church in the "Byzantine style", the Serbs Church service is maybe a little bit closer to how Holy Liturgy and the Mysticisms in the Church are served by priest in the Church. Main thing that mains serbian Church more close to how currently the Holy Liturgies are served in Bulgaria is the fact that on the "Klir" (clergy) in serbian Church there is one or two person, whether in Russian for contrast there is a whole Choire of about 6 / 7 person with a choir conductor. Mentioning of the Choir Conductor and the Russian Choire I should say they sing really beautiful angelic, though the choire sings in the Russian little modernized so called "Western" singing style (as it is sung in most if not all Russian Churches nowdays). The Western singing however is not a problem and the experience one gets from choire singing is bringing the soul high to heavens! The Church choire leader in Nijmegen's Russian Church is a kind lady which is Matushka (wife of the kind and Graceful Priest Father Sergii).
The Russian Church does not have "Verchernaja" (evening Service), because of Holy Liturgy, maybe because father Sergii, his wife, the deacon and ipodakons (under deacons), travel every 2 Sundays to Nijmegen to participate in the Divine Holy Liturgy. Many of the other Russian and Serbian "flock" also has to travel for a nearby cities in order to be able to present and pray together with the Church. Here in Netherlands life of the Orthodox Christians is not and easy. Though it has its pros, like for example the overall high standard and richness of Holland, being an Orthodox Christian in holland usually means a lot of time spend in traveling and a lot of vigilance. Every non-Orthodox should know well Holland is not officially Orthodox Christian, but one part of Holland is mainly predominated by Roman Catholics and other part by Protestants, meaning Orthodox Christian here are usually 1st or second generation emigrants, students or people from Orthodox countries who now temporary  work to earn some better money in Holland. it is interesting that the fr. Sergii himself is local ( Dutch ), the deacon of the Russian Church is dutch and one of the Ipodeacons is also dutch. In Serbian Church I haven't seen so far a deacon, the alter helpers (ipodeacons) are however from Croatia and Serbia and fr. Dushan is born in Serbia and living in Holland since 3 years from the time of moment of writing. Just recently the Serbian Church in Holland marked its 20 years from existence and there was an evening service in Nijmegen, the 20 years of the Church was combined with the Great feast of the Birth of Saint Constantine and Helena Serbian Orthodox Church feast. St. Constantine was the first Emperor who allowed Christianity to be considered equal to rest of worldly beliefs. St. Constantine also stopped severe persecution against Christians. For the feast the head of Serbian Eparchy for Western Europe – Bishop Luka (KovaÄeviÄ‡) was present increasing the joy of the feast of present. 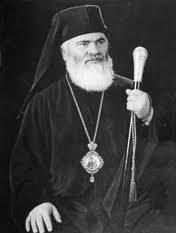 I was only for the Evening Service and presentation (which I can partially understand as it was given in Serbian) but it was interesting and most importantly I get the blessing of  Bishop Luka. More information about bishop Luka's visit to Nijmegen and Nijmegen Parohija (Eparchy)  is found on Serbian Orthodox Church Nijmegen website here

It might be useful to mention, the website providing regular news on Russian Orthodox Church in Nijmegen Church life is – www.orthodox-nijmegen.nl

Hope my article is of help to someone out there. I will close the article with the well known and prayed glorification proclaim:

Glory be to the Father and the Son and The Holy Spirit Now and unto Ages of Ages !