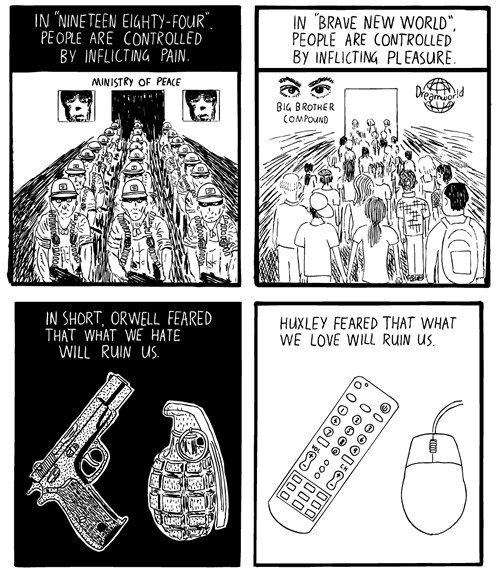 Hi, Hi. It is me the author again. While browsing and conducting a very thoroughful research on Transhumanism. I've stucked upon a documentary movie called after Aldous Huxley's SCI-fi book Brave New World. It is probably, no co-incidence that Iron Maiden took Brave New World as a title for album that went out few years ago. Brave New World book depicts a society which is more than scary from a sane person view.

I suggest you watch the movie and talk about it and about Transhumanism to as many people as you can while, we can still talk freely. This Transhumanism and Posthumanism craziness is not just some joke, but a near future possible reality!!!!


Here are the 5 parts of Brave New World documentary:


Honestly watching the movies it was thrilling experience. I've never ever thought we humans with our insanity and strife for fake "perfection" has gone so far. I don't know why this things are not publicly shown on the TV and there are not more movies circulating on the topic. People has to organize and start opposing, the transhumanism movement and the so quickly pushed technology after technology. We don't need this stupid Virtual Reality to be happy. If we're not happy in current, reality it is more than likely we will never be happy in a Virtual Reality. Finally I would like to ask, why ever this scientists shown on the movie wants to live in a perfect disease-less world? Most if not all of them have no faith in God. At the end, the idea for ultimate perfect world is Christian in essense. Why would they want to imitate perfect God creations if they reject God's ultimate existence….

The concepts as transferring a human mind to a Virtual "existing" reality is no longer a sci-fi concept. The aim of the transhumanists and posthumanist idealogists is exactly this. They want to leave this old world behind and leave in a virtual (non-real) place.

Woe to our generation, woe for if we don't turn back the way and stay human we will end up in a terrible destruction for sure ….