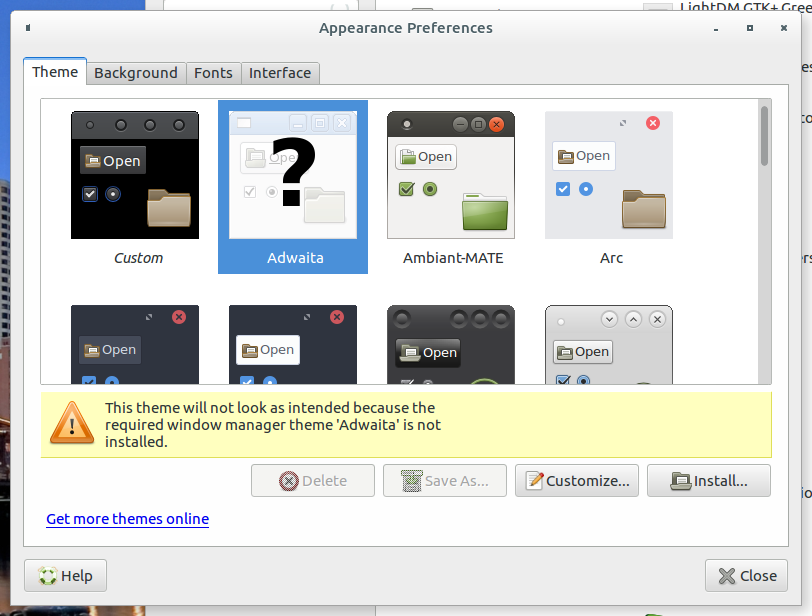 After  trying out GNOME 3.2.x enough and giving it enough chance I've decided to finally migrate to Linux Mate graphical environment (the fork of gnome 2 for modern PCs).

I have to say I'm running Debian 9 Stretch on my upgraded Thinkpad R61, after 2 / 3 days upgrade operations from Debian 7 to Debian 8, from Debian 8 to 9.

Just Migrated to Mate all looked fine, but just as I wanted to make the look and feel identical to GNOME 2, I played with Appearance because I wanted to apply theme Adwaita the one, the one so popular since the glorious times when GNOME 2 was a king of the Linux Desktop.

This package provides a number of Themes I could choose from and one of them is Adwaita Not surprisingly, I faced a theme issue
it complains about window manager theme "Adwaita" missing.

Using the example for Adwaita mate-appearance-properties gives, I believe this is the "Proper" way to fix it, so do the following in order;

The quick and dirty way when using it

I found that all I had to do to resolve the issue permanently was to do this;

And change at the bottom where it says

I know why this works, I just do not know why Adwaita can't use its own Metacity theme without issues, aside from what the kind people at #gnome@irc.freenode.net said about Adwaita previously relying on Mutter.

Feel free to tell me if up explained did not work for you or if you have a better way to deal with the Adwaita missing manager theme issueso far I believe the  problem is resolved correctly.