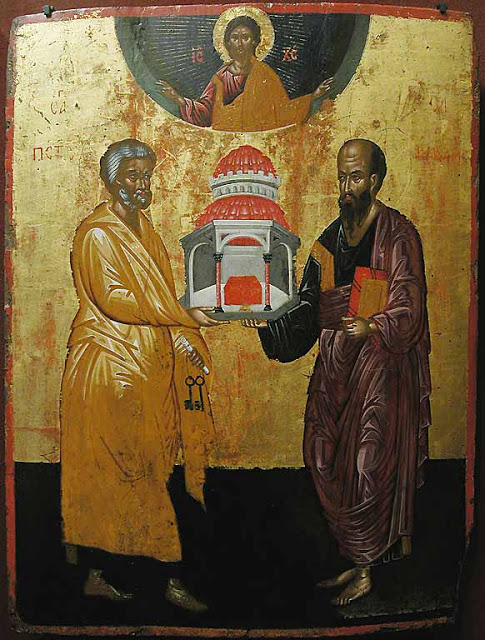 This year the Peter and Paul feast period in the Bulgarian Eastern Orthodox Church was just 3 days (27,28,29), because it is a movable feast and depends on the Great Lent's longitude

Saint Apostles Peter and Paul are named Preeminent because they have laboured the most in setting the basis for the Holy Christ Church.

Saint Apostle Peter together with his brother Andrew were the first which was called by the Lord Jesus Christ which was destined by the Great providence of God to become his desciples and apostles.

Saint Peter's distinguishing soul character was his pure heart and the soul simplicity. Always when the Savior asked questions from his desciples to illustrate them the greater spiritual truths of the Eternal Heavenly life and God's greatness shown through all creation and to reveal them the divine truths about the Holy Trinity it was saint Peter who answered first speaking from the name of all desciples.

That's how one time when Christ asked the pupils "Who do you think I am?", st. ap. Peter immediately answered:

"You're Christ, the Son of the Living God".
Then Jesus told him, "Blesssed are you Simon , son of Johna because no flesh and no blood has revealed this secret to you but my Father which is in heaven; and I tell you you're Peter (in Greek meaning stone), and on this stone I'll build my Church and the gates of hell would not prevail it." Mathew 16:14-18

This is the basis, this is the stone which the Lord used to establish his Church – the firmness of faith and the confession that Jesus is Christ (The Messiah), Son of the Living God. Since that moment apostle Peter started bearing also the name Simon-Peter.

By his age also saint apostle Peter was first among the apostles. After the Ascension of the Savior and the descent of the Holy Spirit over the Holy apostles he preached that firy sermon conquering the hearts and minds of the gathered many leading to the baptism of thousands.

He preached in many regions of the Roman Empire and many cities and wrote two letters which we find in today's Holy Bible, New Testament – First and Second Epistle of Peter also presented in the Roman Catholic and Protestant Bibles named Peter 1 and Peter 2.

Being in persecution, various griefs and sufferings, the primus in honor among apostles has restlessly preached the Gospel.
In 67 A.D. during the persecution against Christians in eperor Nero's time he was martyred.

His persecutors wanted to kill the apostle on the Cross because he was preaching the crucified Christ, but by his humble request to God for his
unworthiness to die with the same death as the Divine Saviour Lord Jesus Christ his executors decided to crucify him with the cross upside down where nowadays we know the inverted cross as a symbol of the holy apostle crucifix.
In later times the inverted upside-down cross started being paradoxically associated with antichrism and satanism but in reality few know that it is also a symbol left from ancient christian church.

Saint Apostle Paul before becoming the desciple and apostle of Christ was called Saulus. He was a very educated person for his time.
However even though his high education he was a soul blind and unenlightened person. He was initially a fierce persecutor of Christians and even requested by authorities to grant him a special task to persecute and kill all members of the new Roman empire "superstitio" as Christianity was called at that time.
On his way to Damascus a great miracle occured and he believed in the Risen Christ the Messiah (Saviour of the World)!

God blessed the repented persecutor with a glory. By a miraculous way the Lord Jesus Christ has appeared to him and he become from a fierest persecutor of Christians he become the most fervent preacher of the Saving Gospel and Love.
He travelled many cities and has enlightened many nations.
Often persecuted because of his preach and has been in chains was fought with sticks and received various tortures for the sake of Christ.
St. Paul wrote many apistles which are red for edification and example for perfect Christian life and dedication during Holy Liturgy to this very day in the Church and his epistle.

Finally in the same year 67 during emperor Nero after being convicted to be a Christian and an enemy of the pagan state not wanting to sacrifice to the Roman idol gods he received martyrdom being beheaded because he was a Roman citizen.

This are the short biographies of the two most glorious among the apostles. So what is the moral and the lesson by this two great saints? 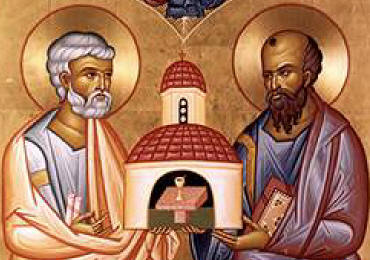 What is the common between the two originally contradictious characters / persons?

The first – simple fisherman, quick in speech and fearful in action who first has confessed the Lord Jesus Christ to be truly God and shortly after his ignition he has denied his Master and Christ thrice.

The other an educated but cruel man a persecuter and killer of Christians.
These two very different man became the two central building blocks of the Church that has enlighted a whole meriad of nations and give them examle and tutoring them in the true way of salvation in the Holy Faith and Love.

By the Grace of God which always heals the sick and the frail, by these grace which unifies not only st. Peter and st. Paul but also all of us in the One Holy Catholic and Apostolic Church. In this Church and through this grace we vitalize and are saved.

Not because of our own merits, not because we've done something worthy but only and because of God's Grace as it is also said in the Holy Scriptures "By the Grace of God I am what I am" (1 Corinthians 15:10) says apostle Paul. Let us overcome pride – the mother of all sins.
Because pride is the reason not to give the owed to God's Grace and deceive ourselves that we with our own energies and powers have become what we're.

Everything we achieve by God's Grace but the condition to attain the Grace is to humile ourselves and hope on God's mercy, because God is an enemy of the proud and to the humile he sends his Grace.

Hence, let us live by the Laws of the Gospels, handed in by the Holy Apostles and let us leave completely ourselves to the power of God's Grace and Love, Now and Forever and Ever. Amen!

This entry was posted on Friday, July 1st, 2016 at 3:27 pm and is filed under Christianity, Everyday Life, Various. You can follow any responses to this entry through the RSS 2.0 feed. You can leave a response, or trackback from your own site.