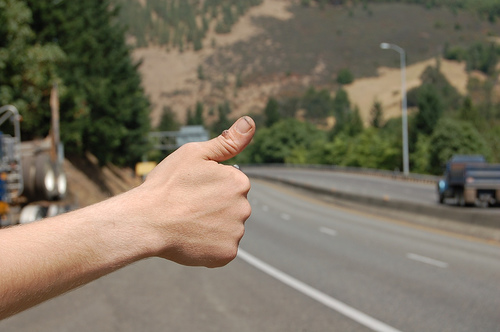 I've been 28 years old and for good or bad never travelled hitch hiking. Today however with a friend of mine Kimba thx God I lived to experience what it is like to stay on the road "begging" people to take you on their way to somewhere.

I always wanted to hitch-hike as a youngster but my restrictive controlling parents was too vigilant not to let me have my personal freedom and try hitch hiking. Now as I've grown "old" I have the freedom to do it and I'm glad I could. For sure it is better to do something you always wanted later than never 🙂

We took the "STOP" from a place few meters away from the "scratching sign" indicating the end of Dobrich city area – located about 4 / 5 km from Dobrich center. To come to the well known hitch-hiker's place (which my friend Kimba) knew pretty well since he travelled probably more than 20 times hitch-hiking.

To reach the hitch-hiker place we walked about 1 hour which in the early morning (07:50 to 09:00) came to be quite refreshing.
About 09:00 we started doing the well know hitch hiker gesture to beg traveller to take us 🙂

It felt quite unconfortable and a bit like begging to be on the road waiting for somebody to pick you up on the other hand it felt very challenging as it seemed to be a good "exercice" to raise up self-confidence. We were lucky and we didn't met any drivers to mock us with gestures or car beep. Besides that we only had to wait less than 20 minutes (probably 18 mins) until a car stop and ask her for our direction.
The driver seemed had to travel close to Aksakovo (a small village like town 1 km far from beginning of Varna and just few km away from the city center).

He pick us up and as we go he happened to be a familiar person which I've seen many times in the (International College Albena) where I previously studied.
The guy happened to be a merried for the librarian of the college. We had a nice chat in his car about Bulgaria before in communism and now and who is doing what (which I guess is quite normal) for hitch-hikers. As he drived a very funny scene appeared as we saw a donkey leading a cart full of wood running on the road. Now you might wonder what would be funny of a rural donkey with a cart full of wood, well the cart didn't have any person leading it. It seemed the donkey run away scared by a truck or a noise so the person leading the cart either fall somewhere on the road or the donkey had untight itself and took the direction to its home place 🙂

… Our hitch-hiking plan was to travel from Dobrich to Varna (if possible or the closest village or suburb), then we aimed to take a bus from Varna or somewhere nearby to the city center and from the city center to Travel to the so called (Asparuh's bridge / (Asparuhovia Most) – which is a common hitch-hike waiting and pick-up destination).

As we were left in Aksakovo by the driver, we were lucky to have a close bus stop near us. We went to the bus stop and we only had to wait about 8 minutes until the next bus driving to Varna city center arrived. We pick up a bus number 207 and travelled 'safely' to the city center (on the price of 1 lv per ticket). So our overall travelling for both of us instead of 10 lv (5 lv per person bus tick) costed only 2 lv 🙂 Along with the low price for travelling the hitch-hiking was also very healthy as we had a long walk to the place to depart from and after that had a small walk to pick up the bus to Varna. We made a mistake to not go out of the 207 bus near Varna city center Cathedral but two stops earlier, so we also had a small 15 minutes walking to the Cathedral. As we were not sure which bus we need to take to go to Asparuhov's bridge, we asked few people on the city center. We were told we need to pick bus number 2 or 17 (IIRC).

Eventually as we're waiting near the bus station where the bus-es leading to Asparuhovo stopped, we came to meet a taxi driver driving people to Asparuhovo on the price of a bus ticket (1 lv). In 5 minutes time, again obviously by God's might intervention the driver was able to collect 2 more people so he offered that we all immediately travel. The taxi-st left us on a place a bit after Asparuhovo's bridge which was the common place for hitch-hikers. We had to climb a little hill like place and walk a bit on the highway on (the car damage and wreck area). Very near us was a police car waiting to catch violators of speed limits. I didn't know about this very moment that Hitch-Hiking in Bulgaria is considered illegal!, happily I found this sad fact not by the police man but from Kliment (Kimba). The policeman did not stop us as we found a way to walk through a place which is bit far from them. Kimba choose a place and we started doing the hitch-hiker "PLEASE STOP AND TAKE US" gesture once again (actually the as Kimba was a professional in hitch-hiking he was mostly doing the hitch-hike sign.

There we had to wait about 40 minutes or so until, a good man with a small bus carrying some paper palettes stop and took us.
Thanks God he had to travel to Jambol to deliver the palettes so his travel route passed by near Bourgas (and respectively Pomorie). We had a an intimaditing chat with the person by which I found out he seem to be having many money issues and a lot of debts (just like many of the people in BG nowdays). Unfortunately he shared that just like a lot of us the common people in Bulgaria he is underpaid and often even though he works extra in Saturdays and Sundays it is almost impossible for him to pay his rent, food and family expenss …..

As the conversation progressed, he asked us where are we going if we're going to find a work and I told him we're going to be guests and pilgrims to Pomorie Monastery and in the mean time help the monks if there is work to be done….

It was a pleasure for me to meet such an honest bulgarian middle aged man, which also was good enough to pick us up. The time passed quite quickly as we shared some of common living joys and griefs. The bus quickly approached pomorie so we left us and we split. As I was thankful to the guy and felt pity for his bad life misfortunes and I wished in my mind that God bless, help him and return him for the good deed he done to pick us up.

We were now only 2 km from Pomorie entrance so to the monastery we had to walk only about 4 or 5 more kilometers. On the gas (oil) station, where we were left a fun story happaned as the computers counting the gasoline stopped working. People who filled the car tanks with Gasoline had to wait until someone comes and fixes the computer, neither nobody can purchase anything from the station (a snacks, a coffee, even a bottle of water) was impossible to buy. We stayed on this little station (Petrol) located just 2 km from Pomorie for 20 or 25 minutes and in this time this people who couldn't pay for the gasoline had to just hang up there loosing their time waiting for someone to fix the BUGGED PC ,,,

This scene has once again confirmed my theory that computerization is not always necessery a good think and the over-computerization of everything as the trend is nowdays could create a lot of time lags in many places and often create a great havoc if systems somehow reject working as planned ….

Anyways to be sure which way to walk to Pomorie Monastery we had to consult few local people. Nicely the road leading to Pomoriiski Manastir was easy we just had to walk straight and then turn right. Actually the monastery bell tower is visible on the way so it is not likely that anyone walking straight will not notice the tower which is taller than other one or two stage housed highed buildings.

We came to the monastery and by Gods grace as we asked previously the abbot for a blessing to come to the monastery, they were expecting us.
Immediately one of the persons serving in the monastery gave us a room. I asked for the abbot and we found him in his Abbot place and gave us a blessing. That's the over of my first and hopefully not last great hitch-hiking adventere. The moral from my trip is:

To sum it up, if you never tried stopping on a highway give it a try! 🙂

This entry was posted on Monday, July 2nd, 2012 at 8:26 pm and is filed under Everyday Life, Various. You can follow any responses to this entry through the RSS 2.0 feed.You can leave a response, or trackback from your own site.