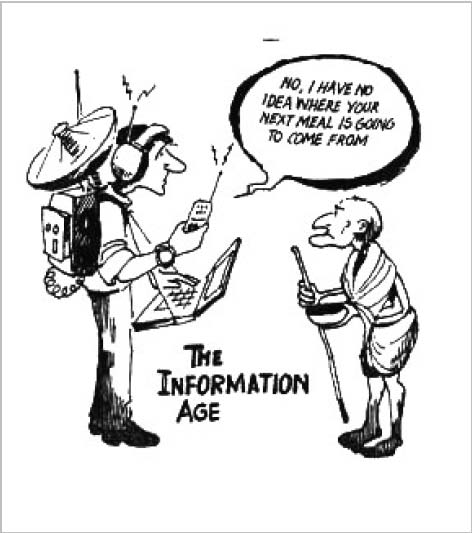 I've been thinking about our modern day progression and what our "progressed" society looks like in reality.
We think we have progressed, we have built machines that serves us well (computers). We plan for a bright painless easy future day by day. This bright "perfect" society future is nothing more than the dream of communism in its complete form.

But in what sense we have actually progressed ?? Everyone who really sees what happens around us notice the big changes we experience. On the surface it looks like our life has become much easier with all this technology surrounding us. The number of computers which is said to help us to leap towards this bright future increases day by day. With this however increases the need to support technology. Suddenly it happens that the old believe that computers are just a tool to make our life earier becomes a modern day slavery. Most of the developed or under development countries people are nowdays almost full time spending in front of the computer screen on the internet. We put our lifes in the mercy of man-created computers and it has become impossible that we live or exist independetly without them.

Computers are everywhere around us starting from the work Desk, at hand with a notebook, ipad, mobile phones, cars, airplanes. There is rarely to see any technology we use which works with not some kind of primitive or advanced computer embedded ,,,
In the rise of computers as we know it computer was just a tool to help us along with the other overall thought and inventions development. Now from just being a tool to help us progress Computers become the common ground on which almost everything in life works.

I'm sure many people who started learning computer technology 15-20 years ago (like me) never imagined computers will integrate so heavily in our daily activities as they eventually did.

We use computers for the sake of planning which in "spiritual language" is predicting the future or prophecise what is about to come in the short future. In reality what we do mostly even not realizingly is to try to predict and modify the future through technology.
This concept is also existing in most sci-fi movies, made in last 60 years. Mobile phones revolution give the humanity a tool through which telepathy we've seen in so many SCI-FI is reality. The mobile phone is just a platform through which (phone calls) or better said voice telepathy has become possible. In that manner of thoughts it is obvious that Video phone calls is a voice + visual telepathy. The Skype revolution and Video and voice conferences is brought was just until recently seen on the sci-fi movies where spaceship crews communicated with other spaceship crews by using a Visual conferences like skype.

It is really hard to believe that for just few years now everyone can speak with ease with everyone else on the planet in the same way just like we've seen in the movies as some foreign abstract concept!

Now suddenly most people on earth are equipped with technology with gives them the power to do everything but it is my firm believe people are not ready to wisely use this power. Therefore instead of using this higher technology wisely technology is used mostly senseless and the more technological advancement grows and becomes more accessible to the masses the more the tendency to use the technology for shit grows.

I'm sure people who have a good knowledge on programming and how computer works are already seriously aware of this enormous problem.
Another severe problem with the raise of technology is the language slang it introduces. This tech-slang is adopted quickly all around the society and suddenly as a result the human language as we know it is seriously substituted by a vague tech words mambo-jambo words. Actually the adoption of tech buzz words in modern day society language makes a great harm for the reason communication between people becomes less descriptive and therefore harder.
In short the result of this tech slang language inside our national languages is inability for people to communicate properly. This tendency is well seen if you for example try to make a comparison between old and newer movies. The newer the movie the less meaningful it is. It is true newer ones has much more as a visual adds than the predecessor but when talking about consistency the newer films are missing this point seriously.

As newer generations are born and raised up with this newer movies and "advanced" TV and computers this people doesn't even have most of the time the opportunity to see older human taped knowledge.
Even for youngesters who have somehow a wise parents enough to teach them in a religious way or just have the "luck" to have parents with old world mindset it will be extremely hard if not impossible for this kids to understand the old knowledge, as most of their same age school / university fellows will only talk about the newer things.

Besides all this, computers as they grow needs more and more support "nurturing" so day by day more and more people has to be busy with managing and supporting tech stuff. Suddenly it is no longer clear if computers serve us or we serve them, this tendency is already somehow evident but not so clearly as it will be in the short 5 to 10 years.
Therefore we slowly but surely are moving to a society which might become "enslaved by technology". Why I say here enslaved, because if we spend our time on fixing computers and technology and working with one virtual reality (which is non-reality) in essence this means we no longer have a physical freedom in the sense it was God given.

There is no doubt computers at present appears to do us a big good, but if you think a bit strategically it is obvious this good has it's price. By adopting all this technology without questioning ourselves on how this will impact our human freedom, we build a computerized jail around us. At first this jail appears to be so wide that it seems it does not interfere with our freedom, but with the introduction of newer and newer computer technology this jail becomes narrower as to the point where it could threat our physical existence freedom.

For those who could argue my thoughs I will ask two simple questions to show you how dependent we've become on technology;;;

What was the last time you switched off your mobile for a week ?

What was the last time you didn't used computers and the internet for a week time ?

Obviously rarely we can find someone that will answer positively to this question or even the thought of switching off from this so globalized society by dropping off tech stuff for a week seems scary.

This constant connectiodness that we're day-by-day heavily exposed to is scary, because it steals little-by-little our natural freedom for seclusion / pravicy / solitude.

This freedoms, were essential and especially for Christian saints and many of the people in the Holy Bible if we read closely we will find out they have used this freedom in parts of their lives especially the seclusion to hear and understand God's will for their life.
Since technology is stealing us the freedom to seclude ourselves this means it steals our basic natural freedom to communicate with God and our natural self ,,,

The consequence of this separation from God and unification with "the world" surely will lead to spiritual blindness and lack of good foundation or higher life purpose, in other words lost path in life.

This is happening all along right in front our eyes now.
Maybe the worst thing of globalization is it doesn't unite people on a soul level but rather separates them. The unification that tech boom gives to people is in the "virtual reality" but this is not a real unification as it is unification in a media which is not real.

Yes Virtual Reality is not real, that's why it is called Virtual isn't it?
I've been thinking over all this problems more and more and I'm starting to come to conclusion that people who wish to keep their essential physical freedom need to GET OUT from this tech lie, we have lived in.
For this however more people need to first realize that;;;

2. People who want to live without technology need to organize in groups – (and get used to a natural living growing food, being near to a natural springing water, taking care for each other, living in a Christian commune like – like in the old days)

Actually if we read the old testament's story of Moses escaping the upcoming flood, I believe what is about to come to us as a consequence of this out of boundaries technologization is pretty much like the old testamental flood (this should happen sooner or later).

Moses was wise enough to make himself an Ark and prepare himself for the storm. Today most people are so busy that they don't see the storm coming. I'll be glad to hear from people who has the same thinking as me and want to organize in a groups and live an old humble way of life without technology.
I'm convinced people who have realized all this tech short future bad consequences on humanity, need to have a common communication media and share their knowledge on how we can find a way to live tech free in this age. I'm curious am I the only one with such thoughts or other get into this insight too. If you have come to conclusions I did please contact me in comments. Thank you.

This entry was posted on Saturday, June 16th, 2012 at 5:07 pm and is filed under Christianity, Everyday Life, Various. You can follow any responses to this entry through the RSS 2.0 feed.You can leave a response, or trackback from your own site.

2 Responses to “Human Modern Progression a move forward to Degression”