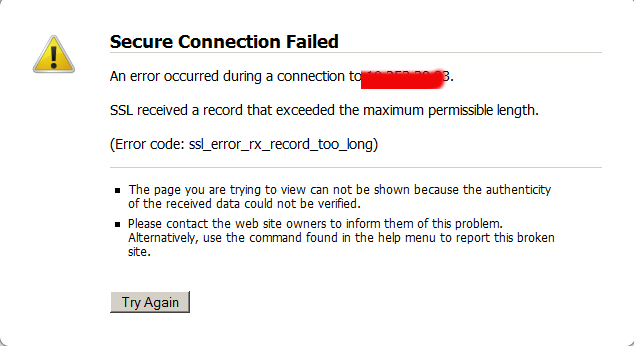 When I was trying to establish a new Internal Business SSL certificate on one of the 6 months planned SPLIT projects (e.g. duplicate a range systems environment to another one), I've stumbled a very odd SSL issue. Once I've setup all the virtualhost SSL configurations properly (identical SSL configuration directives and Apache Webserver version to another host and testing in a browser I was getting the following error:

SSL received a record that exceeded the maximum permissible length.

Below is a screenshot:

The page you are trying to view can not be shown because the authenticity of the received data could not be verified. Please contact the web site owners to inform them of this problem. Alternatively, use the command found in the help menu to report this broken site.

The first logical thing to do was to check the error.log but there was no any errors there that point me to anything meaningful, besides that the queries I was making to the Domain doesn't show off as requests neither in Apache access.log nor in error.log so this was puzzling.
I thought I might have messed up something during Key file / CSR generation time so I revoked old certificate and reissued it.

Shows that all is fine with certificate Then when trying to test remote certificate with SSL command:

: There was an error After plenty of research in Google I come to conclusion something is either wrong with Listen httpd.conf directive or NameVirtualHost is binded to port 80 or some other port different from 443, however surprisingly I did not used the NameVirtualHost at all in my apache config. After a lot of pondering I finally spot it. The whole certificate isseus were caused by:

which I missaw and forget to clean up from template during IP paste (obtained from /sbin/ifconfig |grep -i xx.xx.xx.xx). So finally in order to fix the SSL error I had to just delete <, e.g.:

Such a minor thing took me 3 hours of pondering to resolve and thanksfully it is finally fixed! Then of course had to restart Apache to make fixed Vhost settings working:

So now the SSL works again, thanks God!

This entry was posted on Monday, September 14th, 2015 at 7:24 pm and is filed under Linux, System Administration, Various, Web and CMS. You can follow any responses to this entry through the RSS 2.0 feed. You can leave a response, or trackback from your own site.