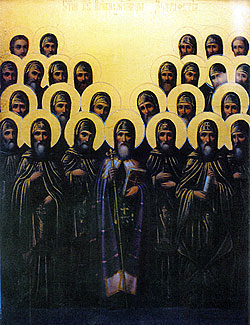 On 23 October (10 of October in Julian Calendar every year in Zograph Monastery in Holy Mount Athos is celebrated the martyrdom of the 26 Martyrs who were martyed by Latin crusaders in October 10, 1280. The 26 martyrs were burned alive after refusal to accept Union with the Roman Catholic Church as ordered by Byzantine emperor Michael VIII Paleologos. The then wanting to secure his throne emperor gave allowance for Crusaders together with his mercenaries Tatars and and Turks to go and “convert” the Orthodox Slavs to accept the union with the pope who wanted a primacy in the Church.

Mt. Athos stood in firm opposition to the Union. The Athonite monks sent a letter to Michael pointing out that the primacy of the Pope, his commemoration in the churches, celebrating the Eucharist with unleavened bread, the insertion of the “filioque” [“and from the Son”] into the Creed, could not be accepted by Orthodox, and they asked the emperor to change his mind. “We clearly see,” the letter said, “that you are becoming a heretic, but we implore you to forsake all this and abide in the teachings that were handed down to you…. Reject the unholy and novel teachings of a false knowledge, speculations, and additions to the Faith.”

An icon spoke to an old monk warning that the “enemies of Christ” are coming. The monk went to forewarn the brothers (as he was living 30 minutes afar in a grave-yard), but for his surprise the Holy icon of the Theotokos which spoke to him was found on the monastic entrance.
The brother went and told the abbot (Igumen) Thomas who told to the brothers to either flew in the woods if they’re weak in spirit and to the strong he said to stay and cofess the Holy Orthodox faith. Abbot Thomas together with the 23 monks (24 monks including the abbot) toghet with 4 pilgrims decided to stay in the monastery and suffered martyrdom. The Crusaders who were returning from Jerusalem sent by the ungodly emperor tried to convince the 26 confessors to accept Roman Catholic doctrines such as “filioque” (The teaching that the Holy Spirit cames also from the Son) and to celebrate the eucharist with unleavened bread (like the Jewish) and wanted the confessors to accept the papal union accepted also by the emeror Michael. The 26 Martyrs rebuked these heresies and explained that the “filique” is against the decisions of the 7 Church Councils. Also they give the proof that the Holy Spirit doesn’t proceed from the Son by retelling how John The Baptist baptized Christ and how the Holy Spirit descent over the Lord Jesus Christ in form of a dove. This didn’t convince the papists and the truthful words of the Zographus monks rebuked their error the papists were angered and burned the tower with the holy Martyrs alive. One of the monks fall of the burning tower and the latin though he is dead left him behind however he survived more 30 days! – even though he was on a dying bed and later told what happened to the brothers which came from their hiding places to the monastery. The Holy Martyrs prayed from the fire their last prayer to God to save the Holy Mount Athos and every true Christian on earth from heresies. When they ended their prayer they heard a voice from heaven “Rejoice for great is your reward in heaven!”. The Roman Crusaders heard the voice and were scared howeveras their spiritual eyes were darkened by the lack of the Grace of the Holy Spirit, they kept in their heart tightening. The Martyrdom happened according to Greek chronicles on 10 of October 1280.

The names of the Martyrs for Christ were as follows:

The tower building where the holy martyrs were burned was partially kept even though the fire until 1874 however the tower was already too old and it was about to ruin – that’s why it hadto be destroyed. To preserve the memory about the martyrdom of 26 martyrs all brothers of the Zographou monastry decided in one spirit to build on its place a monument. 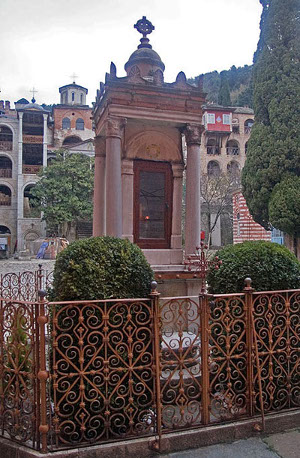 This happened the same year 1873. The monument had to be sanctified on the day when the memory of the martyrs is celebrated at the eve after sunrise began a night vigil. The night was moonless and on the heaven one could see only few stars. All around was silence. During the vigil exactly in midnight, after beginning the living and martyrdom of the the holy Zographos martyrs”, above the church all 600 hundred people saw a fire column. Column lighted up the whole monastery and the whole region with such a bright light, that even the small objects in the monastery could be seen. This divine column stayed over the Church for 3-4 minutes and moved and stayed above the monument for 3-4 minutes more and after that started ascending above and formed a ring like a crown, crowning the place where the holy martyrs suffered. 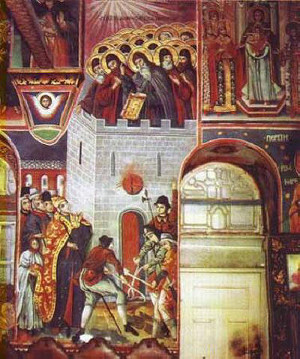 This unusual event continued for about 15 minutes. An eyesights of the miracle were all the brotherhood, guests and hermits who came from nearby Sketes for the feast.

That’s how the Almight God has shown by this miracle omen showing in front of everybody how Godly was the martyrdom of this great confessors of the true faith and loyalty to the Holy Orthodox Church.

Holy 26 Martyrs and Cofessors of the true faith pray the Lord Jesus Christ to save our souls!

This entry was posted on Friday, October 24th, 2014 at 4:59 pm and is filed under Christianity, Everyday Life, Various. You can follow any responses to this entry through the RSS 2.0 feed. You can leave a response, or trackback from your own site.