Archive for the ‘Outlook’ Category 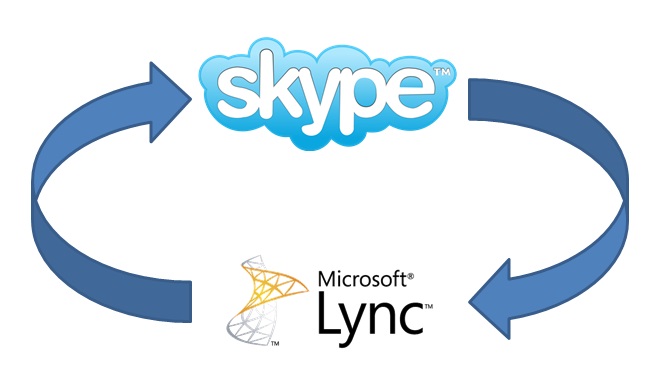 If you are working in a large corporation such as (HP or HPE – Hewlett Packard Enterprise (HPE is the new splitted company brand name for the Software and Servers division of ex-HP) / IBM / Dell or any other company with the size of top fortune companies and you Computer Domain admistrator has forced your work PC to already use Skype for Business instead of the good tested Lync Client along with the goodies and PROS of having the newer Skype for Business (S4B) as usual for old fashened users like me and the avarage employee the New S4B interface will turn into nightmare with all this circled names and more buttons and the annoying Skype Blue Theme.

For anyone who has even basic idea of design and aesthetics, I believe the default Theme of Skype For Business  will be evaluated as a serious "interface downgrade" compared to the simple looking Interface and White Skin of Lync Client.

With this said it will be logical for the end user like me to desire to customize a bit default S4B Skin to make it more elegant looking like Lync 2013 client but guess what there is a Surprise if you google around, Skype For Business just like the regular Skype client doesn't have integrated support for Skins / Themes.
To make the horror complete, many big corporations are choosing to migrate their Email infrastructure from the classical and well tested Windows Domain with Exchange Server to  Microsoft Office 365 (Cloud services),
which makes the dependency on M$ products even bigger and in the long run control and spying on people's email and information (people's data security even worsers) as you know how hackable Windows prooved to be over the years.


Well for those who remember the good old times of IRC (Internet Relay Chat) and ICQ (I seek you) 🙂 and even Jabber when chatting emerged and boomed into popularity all the chat clients nomatter whether it was a free software under GPL / BSD license or it was a Proprietary licensed software, there was always alternative on the Interface Outlook of the Chat clients and on practically all popular Chat / Audio / Video communication Standards / Protocols, there used to be some option for the users to use either a different client or to customize the outook of the program.

Well now the big surprise with Skype Protocol which was purchased by Microsoft some years ago back is this terrible already M$ program doesn't have any option for changing the Theme and even basic customization besides the ones provided by default by Microsoft. For my surprise such a trivial and everybody used program like Skype with perhaps already 1.5 or 2 Billion or even more users doesn't have even basic support for customization !!!
To make the Skype program use horror story even worser Microsoft does upgrade the Skype client agressively and for the last 3 or 4 years Skype is owned by Microsoft the interface gets changing slightly or even completely with every next release.

Now with latest Skype versions since a 1.5 year or so the agressiveness of the program even increased further as it wants you to automatically upgrade, every time you run Skype.
With this in mind and the fact, I have to spend about 8 to 10 years on the PC with Skype for Business switched on on my notebook with no option to use Lync for communication because of the Domain Exchange forcing the changes to all of the users within our EMEA.

So after some serious digging on the Internet, the only work around to change the Skype For Business Theme available by a couple of sources is to Revert Back the Skype User Interface to Lync 2013 Client by changing a value to the Windows registry and get back the good old elegant Lync interface instead of S4B.

The Windows registry value that needs to be changed is:


The default value there is:

The value has to be changed to: 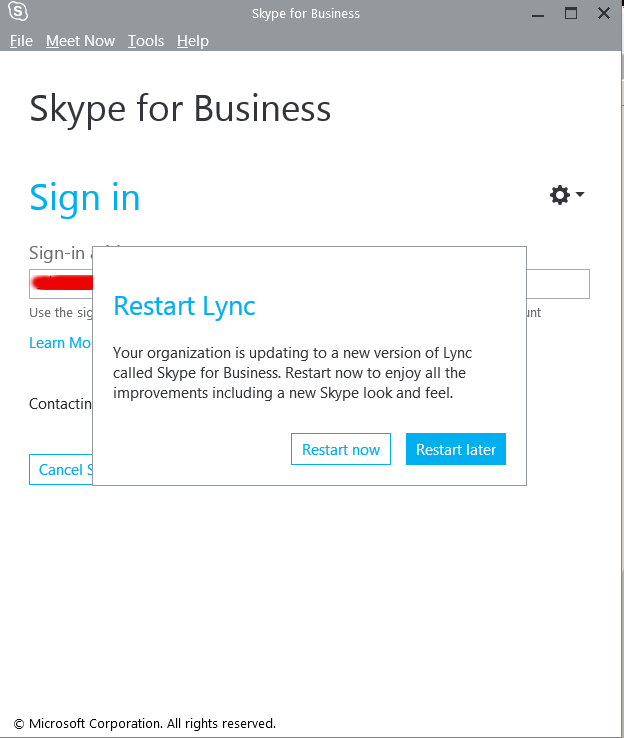 To modify about registry setting you will either have to manually run regedit from Start -> Run ->  cmd.exe or use Windows button + R and type inside run box:


Or even better just use and Run (Click over twice) on this skype.reg (download) sciprt which will modify registry

Because the Domain administrator has forced a policy to automatically offer Change of Lync Interface to Skype for Business on every notebook boot to disable EnableSkypeUI registry value and make Skype appear in the good old Lync UI, I've created also a tiny Batch script lync_ui.bat with following content:

Note that both skype.reg and lync_ui.bat should be existing in my case in C:\Users\georgi\scipts , change this path to whatever your username is and create scripts folder in your User Home dir.
If unsure about the home directory name you can check it from command prompt with:


To make the lync_ui.bat (script invoking skype.reg)  be executed on every PC boot, you need to add it to: 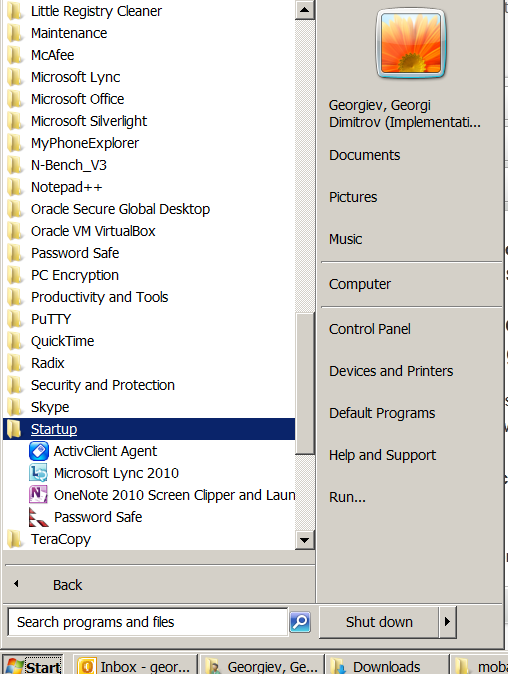 Well this is it now you will have back the Lync UI, Enjoy! 🙂 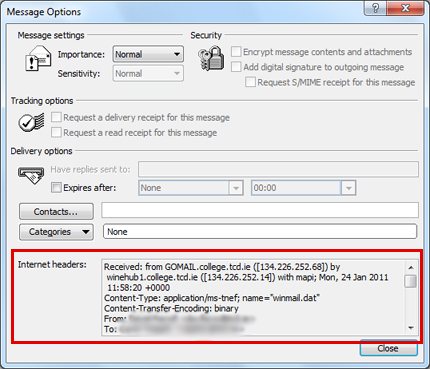 Being able to see the headers is very important if you have to administer Microsoft Exchange mail server / Windows Active directory in case whether mails have some issues not being received within a Corporate Outlook MS Clients because of being mistakenly flagged as spam, or just to track the route of the mail. By default Outlook displays only few fields of the headers: From, Sent (date and time), To, and CCs. This gives too little info and is often irritating, as you can't really see important info such as:

In Outlook 2010 / 2013  when you use the default settings, you need to OPEN the message (Double Click on some random Mail) and either go to the Tags section of the ribbon or go to File, Properties.

Click on the Expand button (highlighted in yellow) in the lower right corner to show the Message options dialog. Voila You will have the Properties dialog with the (Mail) Internet headers in the bottom (see screenshot) 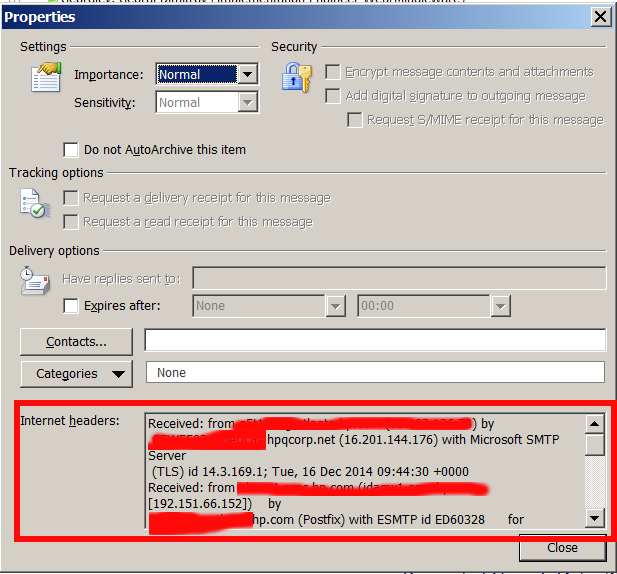 One thing to mention is when you have a Mail Message Headers visible through the Properties dialog in Outlook, it is very unpleasent there is no way to search inside Visualized Mail headers ..

2. How to access Outlook Full Mail Headers using a shortcut

For those who had to regularly check Mail headers, it is very useful to make Outlook View Headers accessible through a key shortcut.

a) Go to File > Options > Quick Access Toolbar.
b) In Choose Commands From, select Commands Not in the Ribbon 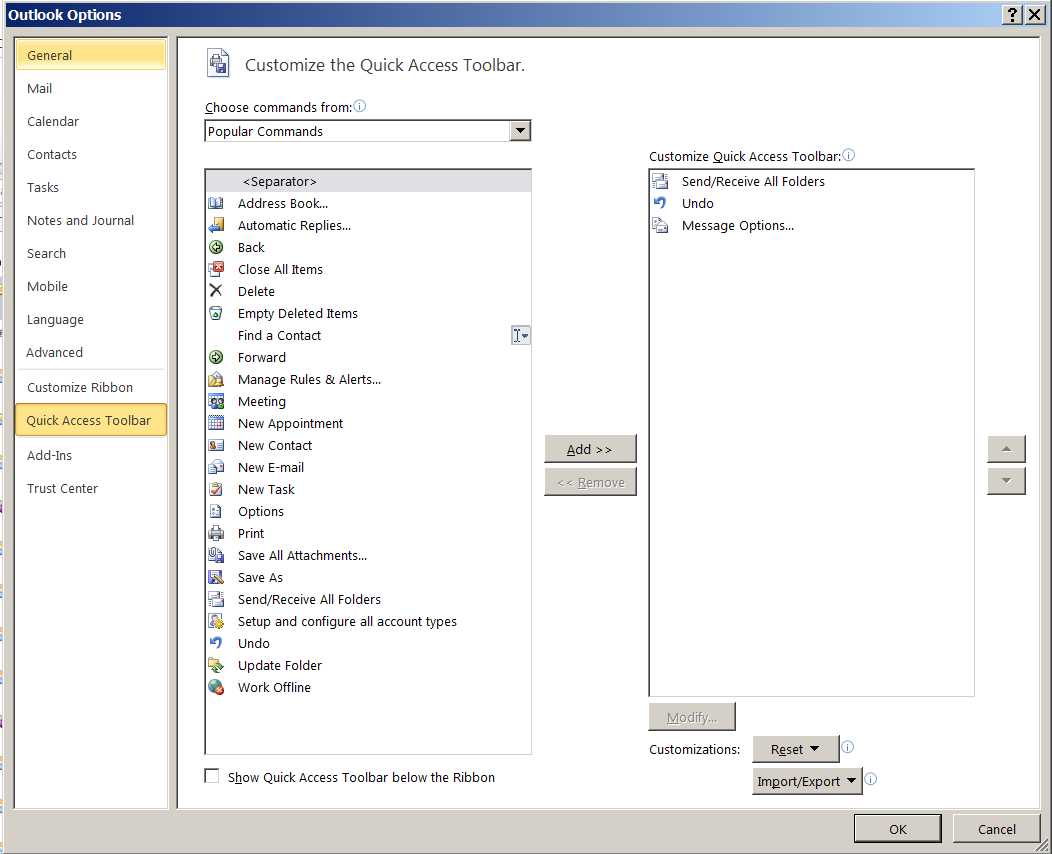 To Quickly Access New added "Message Options" / View headers QAT, the shortcut to use is something like ALT + 3, or ALT + number (depending on the number of QATs already existing in the mailbox, the position of the Message Options on the QAT bar determines the exact nr. to be used.)

Right-click on Mail message in the folder view, then choose Options.

Select the message whose headers you want to view.
Right-click (or Control-click) on the message and choose View Source.
Message headers appear at the top of the text document that opens.

If you're working in a middle or big sized IT company or corporation like IBM or HP, you're already sucked into the Outlook "mail whirlwind of corporate world" and daily flooded with tons of corporate spam emails with fuzzy business random terms like taken from Corporate Bullshit Generator

Many corporations, because probably of historic reasons still provide employees with small sized mailboxes half a gigabyte, a gigabyte or even in those with bigger user Mailboxes like in Hewlett Packard, this is usually no more than 2 Gigabytes.

This creates a lot of issues in the long term because usually mail communication in Inbox, Sent Items, Drafts Conversation History, Junk Email and Outbox grows up quickly and for a year or a year and a half, available Mail space fills up and you stop receiving email communication from customers. This is usually not too big problem if your Mailbox gets filled when you're in the Office (in office hours). However it is quite unpleasent and makes very bad impression to customers when you're in a few weeks Summar Holiday with no access to your mailbox and your Mailbox free space  depletes, then you don't get any mail from the customer and all the time the customer starts receiving emails disrupting your personal or company image with bouncing messages saying the "INBOX" is full.

To prevent this worst case scenario it is always a good idea to archive old mail communication (Items) to free up space in Outlook 2010 mailbox.
Old Outlook Archived mail is (Saved) exported in .PST outlook data file format. Later exported Mail Content and Contacts could be easily (attached) from those .pst file to Outlook Express, leaving you possibility to still have access to your old archived mail keeping the content on your hard drive instead on the Outlook Exchange Mailserver (freeing up space from your Inbox).

Here is how to archive your Outlook mail Calendar and contacts: 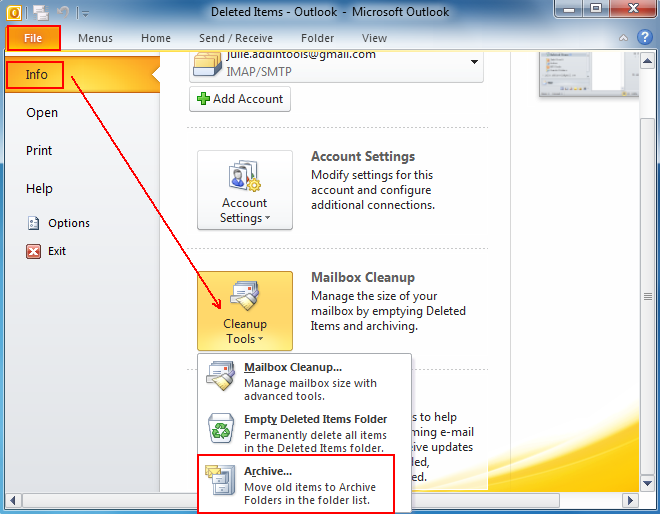 1. Click on the "File" tab on the top horizontal bar.Select "Cleanup Tools" from the options.

3. Click on the "Archive this folder and all subfolders" option.

5. Choose archive items older than (this is quite self-explanatory)

6. Select the location of your archive file (make sure you palce the .PST file into directory you will not forget later)

That's all now you have old mails freed up from Outlook Exchange server. Now make sure you create regular backups ot old-archived-mail.pst file you just created, it is a very good idea to upload this folder to encrypted file system on USB stick or use something like TrueCrypt to encrypt the file and store it to external hard drive, if you already don't have a complete backup corporate solution backuping up all your Laptop content.

Later Attaching or detaching exported .PST file in Outlook is done from: 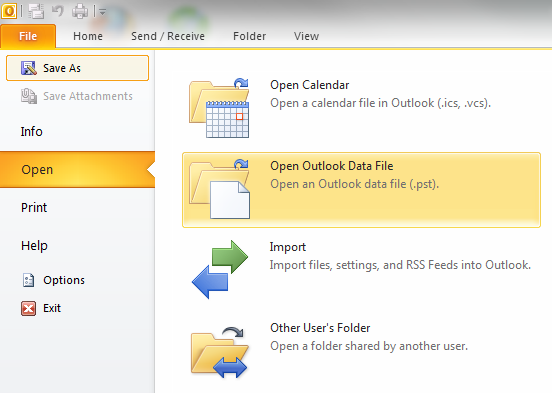 Once .PST file is opened and attached in Left Inbox pane you will have the Archived old mail folder appear.

I'm using Mozilla Thunderbird over the last 5 years in my life. Just now in my new job place in Hewlett Packard, in order to have well functional mail (with exchange server) – I started using Microsoft Outlook.
Logically a little while after I started my work I have to update my Outlook E-mail signature to reflect my contact details (job position title, email, stand-alone / mobile phone, office address etc.). As of moment of writting I'm using Microsoft Outlook 14.0.6123.5001 (32 bit) part of Microsoft Office Professional Plus 2010.

Its a kind of irony that I had to use Microsoft products after all these years trying my best to avoid using Microsoft technologies but heh, this is life … Though this article will be a bit trivial I decided to blog it because already I had to change email signature for a 3rd time over the last 3 months and every now and then after a month time I tend to forget how I did it last time.

Here is how I changed Email Signature in Outlook: 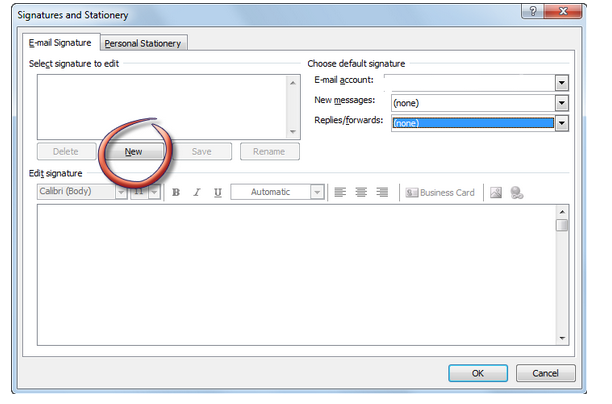 Perform steps 1-4 in ('Create Signatures') except click 'Delete" button instead of 'New'.

Highlight signature name you wish to modify under