If you have installed Squid Cache Proxy recently and you need to watch who is accessing the proxy and what Internet (website is viewed) under /var/log/squid/access.log /var/log/store.log /var/log/access.log etc., you will be unpleasently surprised the log's records are logged in a weird human unreadable format called UTC as Squid Proxy server does not store the date / year / hour time information in a human readable format.

Squid uses the format:
<UNIX timestamp>.<Centiseconds> and you have to be a robot of a kind or a math genious to read it 🙂

To display Squid Proxy log in a human readable, luckily you can use below one-liner  regular expression.


If you have to review squid logs multiple times and on a regular basis you can either set some kind of cmd alias in $HOME/.bashrc such as: 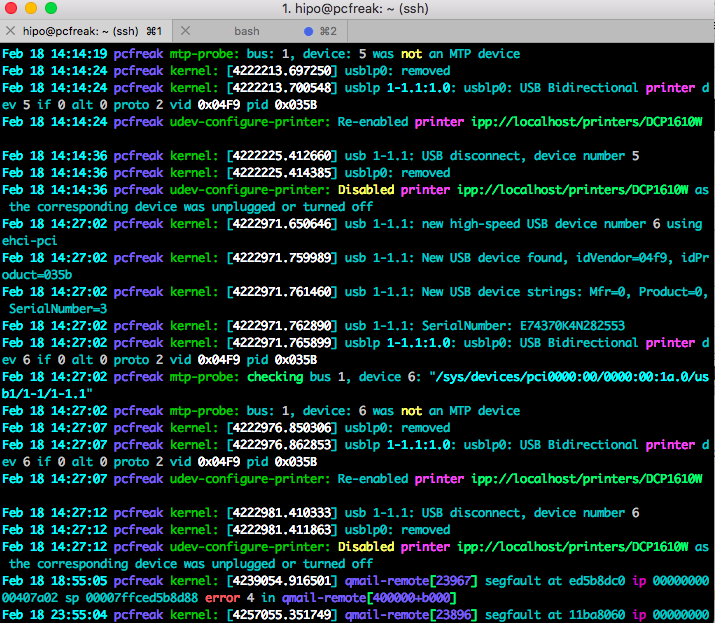 For a frequent tail + ccze usage with ccze you can add to ~/.bashrc following shell small function


Below is a list of supported syntax highlighting colorizer:

At many cases for sysadmins like me that prefer clarity over obscurity, even a better solution is to just change in /etc/squid/squid.conf
the logging to turn it in human-readable form, to do so add to config somewhere:


SQUID's format recognized parameters in above example are as follows:

Check the count and monitor of established / time_wait TCP, UDP connections on Linux and Windows with netstat command

For me as a GNU / Linux sysadmin it is intuitive to check on a server the number of established connections / connections in time_wait state and so on .

To prevent this therefore sysadmins should always take a look periodically on the Connection states on the adminned server (and in this number I say not only sys admins but DevOps guys who are deploying micro-services for a customer in the Cloud – yes I believe Richard Stallman is right here they're clouding your minds :).

Even though cloud services could provide a very high amount of Hardware (CPU / Memory / Storage) resources, often for custom applications migrating the application in the Cloud does not solve it's design faults or even problems on a purely classical system administration level.

1. Get a statistic for FIN_WAIT1, FOREIGN, SYNC_RECV, LAST_ACK, TIME_WAIT, LISTEN and ESTABLISHED  Connections on GNU / Linux

On GNU / Linux and other Linux like UNIXes the way to do it is to grep out the TCP / UDP connection type you need via netstat a very useful cmd in that case is:

2. Netstat 1 liner to Get only established and time_wait connections state

Other ways to check only TCP ESTABLISHED connections on Linux I use frequently are:

Or to get whole list of connections including the ones who are about to be esatablished in FIN_WAIT2, TIME_WAIT, SYN_RECV state:

3. Other Linux useful one liner commands to track your connection types

List out the all IP addresses involved instead of just count.

List all the unique IP addresses of the node that are sending SYN_REC connection status.

Use netstat command to calculate and count the number of connections each IP address makes to the server.

List count of number of connections the IPs are connected to the server using TCP or UDP protocol.

Show and list IP address and its connection count that connect to port 80 on the server. Port 80 is used mainly by HTTP web page request.

4. Check the count of esatblished connections on M$ Windows

As I'm forced to optimize a couple of Microsoft Windows DNS servers which are really slow to resolve the
The logical question for me was how the Established and TIME_WAIT state connections then could be checked on Windows OS, after a quick investigation online I've come up with this:


If you're used to Linux watch command, then to do same on Windows OS (e.g. check the output of netstat) command every second
and print output use:

To find out which process on system sends packets to remote destination:

The -o parameter outputs the process ID (PID) responsible for the connection.
then if you need further you can find the respective process name with tasklist< cmd.
Another handy Windows netstat option is -b which will show EXE file running as long as
the related used DLL Libraries which use TCP / UDP .

Other useful netsatat Win example is to grep for a port and show all established connections for it with:


Hopefully this article will give you some idea on what is eating your bandwidth connections or overloading your GNU / Linux – Windows systems. And will point you to the next in line logical thing to do optimization / tuning
settings to be made on your system for example if Linux with sysctl – see my previous relater article here

I'll be intested to hear from sysadm colleagoes for other useful ways to track connections perhaps with something like ss tool (a utility to investigate sockets).
Also any optimization hints that would cause servers less downtime and improve network / performance thouroughput is mostly welcome.